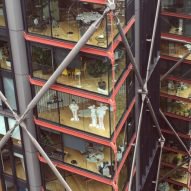 Developed by legendary hotelier Ian Schrager and designed by Swiss firm Herzog & de Meuron, the 28-storey building at 215 Chrystie Street has only been open for two months.

But complaints are flooding in from residents of neighbouring buildings, who say Public‘s floor-to-ceiling windows are providing unwanted views of the X-rated activities taking place in the rooms.

Those living in apartments at 10 Stanton Street have described some of the things they have witnessed to the New York Post.

“Guys are together, girls and girls are together. They don’t even pull the shades down,” said Leonor Fernandez, 68.

“You see them having sex all the time, hands on the window,” said 26-year-old Melissa Santos, who lives in the same building. “Not like I’m a peeping Tom, but from the corner of my eye, you can see this going on four times a week.”

Concerns were raised at a recent tenants association meeting about the nudity and noise, according to DNAinfo.

“People are seeing people having sex — they don’t even close their blinds,” said Debbie Gonzalez.

“The other night, two people were doing it,” added Catherine Bruno, 63. “If my sons were little, I would be mortified.”

Similar issues occurred when The Standard, High Line hotel opened in the city in 2009. The building, designed by Ennead Architects, similarly has fully glazed facades that offer views into the rooms. It was used for a graphic scene in the 2011 movie Shame, in which two characters have sex up against one of the windows – filmed in part from the street below.

Another Herzog & de Meuron project hit the news this year over issues with voyeurism. Visitors to the firm’s extension to the Tate Modern in London were accused of peering into apartments at the Rogers Stirk Harbour-designed Neo Bankside, and residents are taking legal action to close part of the viewing platform.

Public is intended as a no-frills alternative to the city’s abundant luxury accommodation, in an attempt to rival Airbnb. The hotel did not wish to comment, and Herzog & de Meuron are yet to respond.