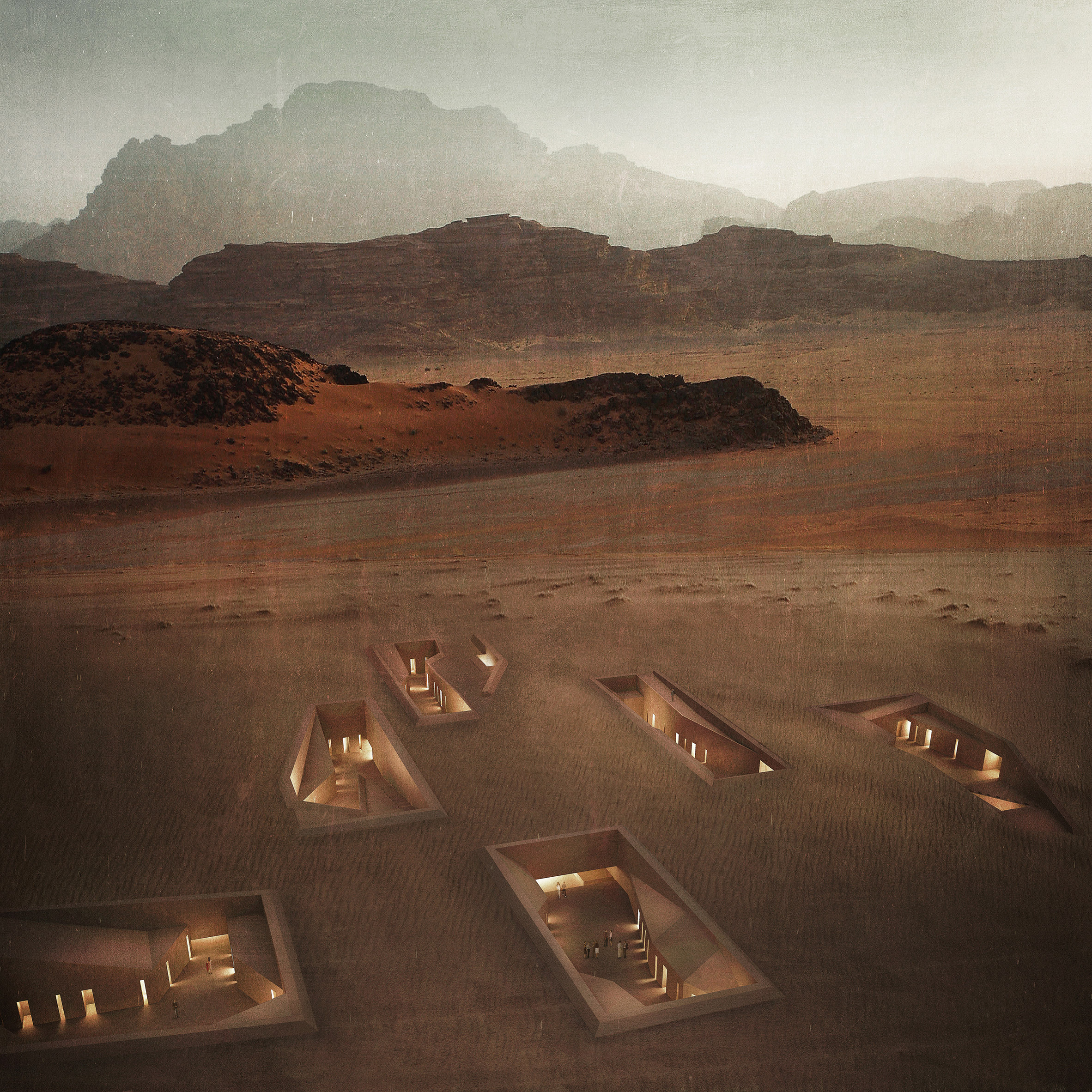 Architect Rasem Kamal has proposed a network of burrow-like spaces that would sprawl out beneath a UNESCO-protected valley in the Jordan desert.

Kamal, an architect and designer at the Basel office of Oppenheim Architecture, drew up plans for the 180,000-square-metre site for his thesis project at the Rice School of Architecture in Texas.

His Wadi Rum Excavated Sanctuaries – a complex containing a train station, museum and hotel – is set underground to retain the appearance of Wadi Rum.

The UNESCO-protected heritage site comprises a vast stretch of near-empty desert hemmed by colourful sandstone mountains in the south of Jordan.

“This project represents the architectural product of a thesis that focuses on subtraction not addition, subtracting voids and spatial volumes according to users’ need of functions, circulation and natural light,” explained Kamal.

“These voids could be excavated in the natural ground in order to create a concealed and non-distracting architectural presence above ground, along with an unlimited flexibility to subtract underground.”

It is the second concept Oppenheim Architecture has developed for Wadi Rum. It previously proposed a development of lodges carved in the sandstone cliffs surrounding the valley.

The underground train station, hotel and museum would provide infrastructure for the proposed residential development.

Kamal was motivated to create the project by the age-old debate surrounding the trade-off between external form and internal space. As a result the project has little detectable outer form to compete with views of the mountains – aside from a swimming pool that would be placed at ground level.

“Lately, a great many prominent architectural practices have been focusing on developing dynamic forms, new building materials, sophisticated details and tectonics as well, while only the minority of these contribute to their internal spaces,” explained Kamal.

“Consequently, this thesis aimed to flip the relationship between the explicit and implicit, by diminishing the power of external form along with exploiting all the previous efforts that were used for it to subtract spaces where we will live, experience and enjoy,” he added.

Based on ants nests, the underground chambers are accessed by courtyards and have layouts designed according to the specific needs of the station, hotel suites and museum.

Each courtyard is unique and based also on the topography of the site and the intensity of natural light.

“These excavated sanctuaries announce themselves from their interior not exterior,” said Kamal. “In other words, this is a new redefinition of the modernists’ phrase ‘form follows function’ into ‘subtraction follows function’.”

Renderings are by Pixel Visualisation.