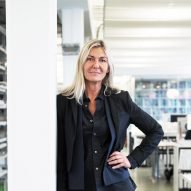 Royal College of Art tutor Harriet Harriss has created a list of over 300 notable architectural texts written by women, to show universities that there are no excuses for giving students male-dominated reading lists.

Harriss, who is a senior tutor in interior design and architecture at the RCA, created the Women Write Architecture list to encourage UK architecture schools to be more inclusive with their curriculums. She claims that, although many respected female writers exist, they are largely ignored on student reading lists.

“With term about to start, many students will be issued with reading lists that are largely dominated by male writers, leading them to assume that the key voices of authority within the discipline of architecture are male,” she told Dezeen.

“But it’s not that women don’t write, their work is just less likely to be included,” added Harriss.

“In fact, the lack of gender representation in the profession is being sustained and maintained by schools of architecture – if fewer students know about the work of women, ultimately their work is ignored and they’re less likely to be considered for senior academic roles.”

Harriss’ list includes a host of respected female architects and theorists, including Beatriz Colomina, Ada Louise Huxtable, Lina Bo Bardi and Jane Jacobs. She plans to continuing adding to it, as she receives more suggestions.

Her aim is not only to inspire young women entering the profession, but to also promote established female talents she believes have been overlooked.

“The idea is that this will not only encourage more female students to feel equally represented within the profession of architecture, but it will hopefully encourage more of them to enter academia,” she explained.

“Simultaneously, the careers of the many incredible women writers in architecture will be given more recognition for their work, and greater opportunities for professional advancement, including access to leadership roles.”

“I am not a female architect. I am an architect”

Women’s representation in architecture has been hotly debated recently, particularly after Danish architect Dorte Mandrup argued that creating worthy lists and exhibitions dedicated to “female architects” was only making the problem worse.

Mandrup’s comments triggered a mix of responses from women architects in the USA. But Perkins+Will principal Joan Blumenfeld said that, while it is “demeaning and patronising to be separated out”, women will go unnoticed unless a “strong effort” is made to promote their work.

In the UK, architecture magazines the Architectural Review and the Architects’ Journal are spearheading the Women in Architecture initiative, an annual survey and awards programme that spotlights the gender balance in the profession.

Similarly, in design, Australian studio Double Days has created a publicly editable directory of women who can be contacted by conference organisers, to avoid female underrepresentation at panel discussions.

Harriss’ campaign has already been praised by architecture tutors, including Frances Holliss of The Cass in London and Claire Jamieson from the University of Hertfordshire.