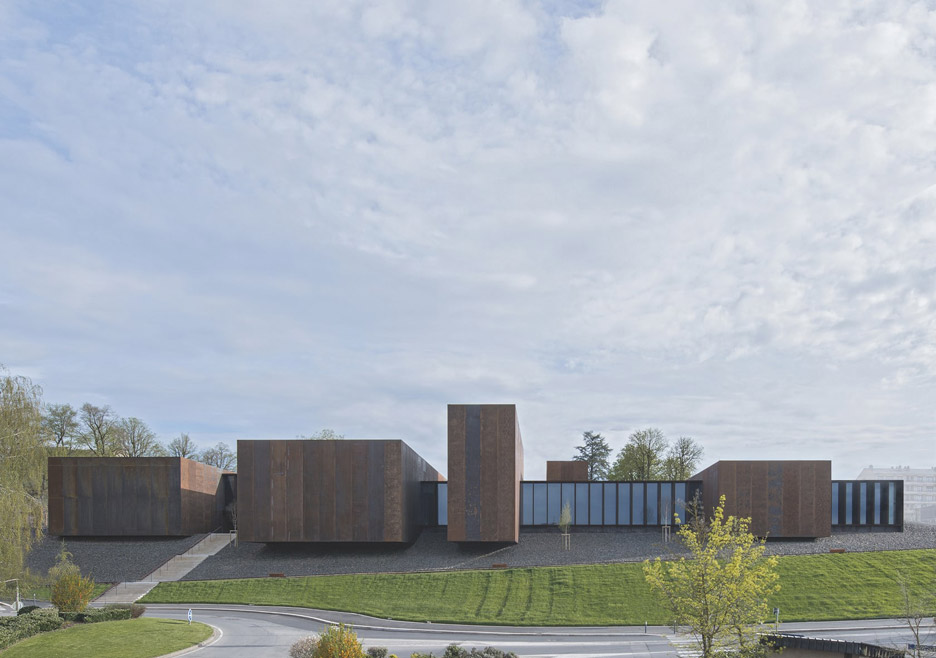 A+Awards: this year’s Pritzker Prize-winning studio RCR Arquitectes is behind this steel-clad museum in France, which also earned the Catalan firm an Architizer A+Award.

The Soulages Museum in Rodez was completed in 2014 by RCR Arquitectes – the surprise winner of the 2017 Pritzker Prize, architecture’s equivalent of the Nobel – in collaboration with architect G Trégouët.

It was designed to house the works of French painter Pierre Soulages, who was born in the small city in 1919 and is now 97 years old.

“[To design] a museum for Soulages, the French painter of ‘light’ who has inspired us so often was – and still is – a cherished dream,” said RCR Arquitectes. “In the town of his birth, Soulages can be seen for what he is: his approach, his attitude and his involvement.”

The museum also hosts exhibitions on other contemporary artists, which are housed together with the Soulages collection within weathering-steel boxes that cantilever slightly from a small slope.

The volumes vary in height, width and depth to create an uneven profile, and the galleries are linked by glazed corridors and bridges that form a route through the museum.

The sequence of interiors is intended to mirror the play of light and shadow that features prominently in Soulages’ paintings.

Set within grassy public park, the building enjoys views over the city’s medieval structures and mountains beyond.

“Museum and landscape have a mutual feedback, merging into one, like the painter and his work,” said the firm, which has also used pre-rusted steel in a variety of its other buildings.

Soulages Museum won in the Museum category at the 2016 A+Awards. Organised by Architizer, the awards promote and celebrate the year’s best projects and products.