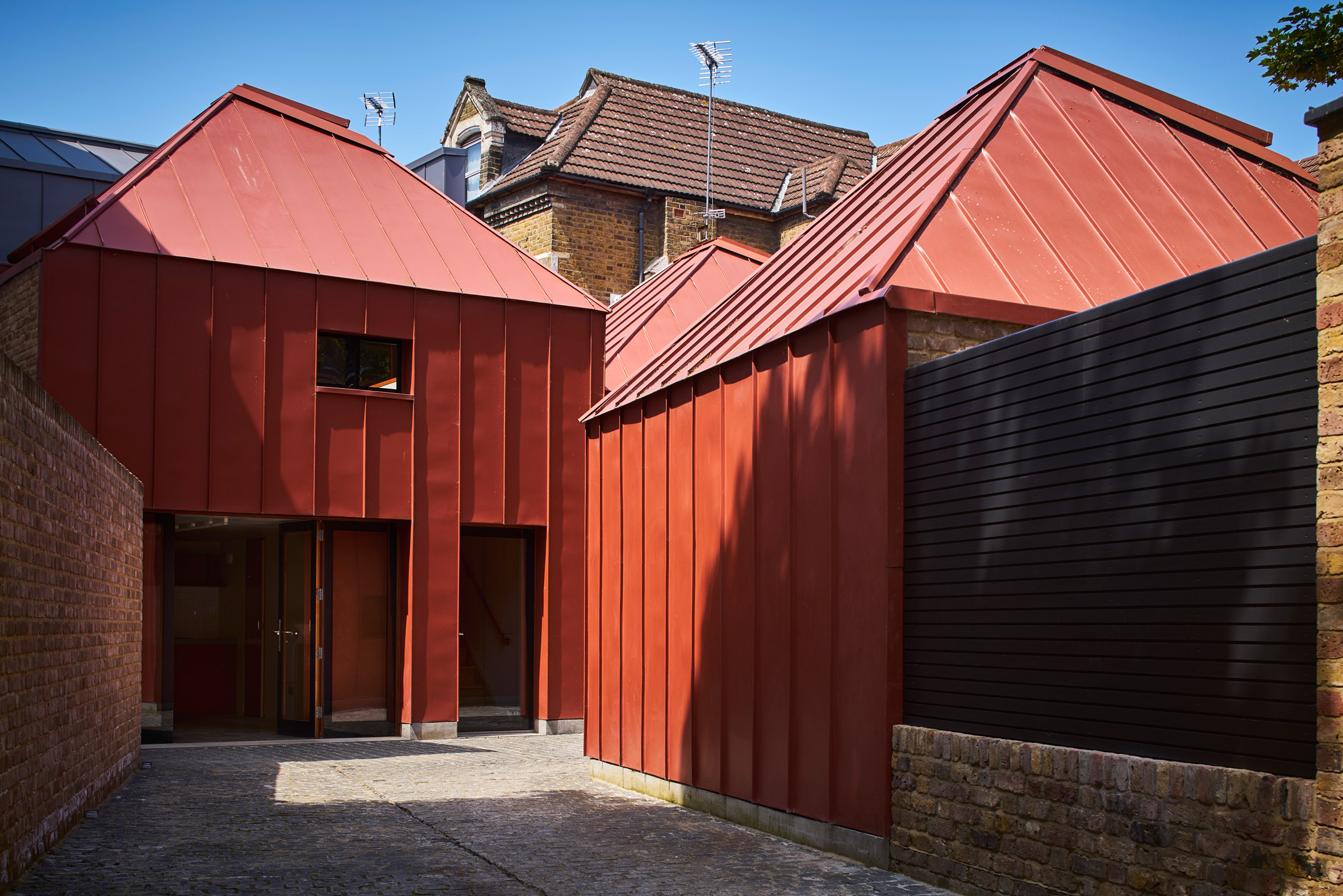 A cluster of red metal-clad volumes are arranged around a secluded courtyard at Henning Stummel’s self-designed home in west London.

The Tin House is squeezed onto a plot surrounded and overlooked by traditional terraced houses in Shepherd’s Bush. It was designed by Henning Stummel as a new home for his family, with a studio for his practice located in a separate brick gateway building.

When Stummel purchased the former car-breaker’s yard at auction, it had planning permission for a flat-roofed bungalow in the centre of the plot, surrounded by a two-metre-wide garden.

The architect developed an alternative design that inverted the proposed layout and positioned the buildings around a cobbled courtyard, lending the house a sense of privacy and seclusion despite its densely populated context.

“The ambition was to create a tranquil and private place in a bustling part of London,” Stummel told Dezeen.

“We broke the brief into its elements, so each main room is within a mini house with pyramidal roof,” he added. “This allowed us to define our own courtyard and to minimise impact on neighbours. A taller building in this urban location would have been very controversial.”

Russet steel cladding with raised seams applied to all the walls and roofs of the six interconnected blocks helps to create aesthetic cohesion between the structures, which each have unique dimensions.

The metal’s warm tone was chosen to complement the natural hue of the surrounding London brick.

A shallow pool along one edge of the courtyard helps generate natural cooling by producing condensation, and creates reflections that play across the building’s facades when the sun shines on it.

The pods each contain an individual room, while gaps between accommodate services including the toilets and stairs.

“As one moves through the building the layout gives a changing enfilade of vistas and views,” said Stummel, “the geometric forms accentuated by the simple utilitarian finishes.”

Directly in front of the entrance is a garage, with the rest of the pods containing bedrooms, an entrance hall, a living room and a kitchen and dining room. Two further bedrooms are situated above one of the ground-floor bedrooms and the adjacent garage.

Skylights at the apex of each irregular pitched ceiling direct daylight into the rooms. The interiors feature pale rendered surfaces that enhance the brightness of the spaces, with rich red-orange walls and cabinetry complementing the external cladding.

A wood-burning stove in the living room is accommodated in a recess surrounded by brick that references the materiality of the entrance gate and the fabric of the surrounding streetscape.

The house was named on the longlist for the RIBA’s House of the Year 2016 award, with the winner set to be announced on 15 December 2016.

Photography is by Timothy Soar.