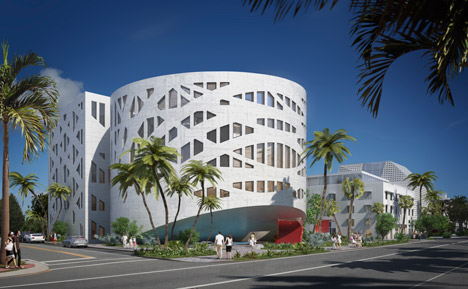 News: the Pantheon-like interior of Rem Koolhaas’ arts and culture centre in Miami Beach has been revealed by developer Faena during this year’s Design Miami and Art Basel events (+ slideshow).

Due to open in December 2015, the 4,645-square-metre Faena Forum designed by Rem Koolhaas and his Dutch studio OMA will provide Miami Beach with a venue dedicated to arts and performance.

An exhibition at the Faena development on Collins Avenue in Miami Beach presented the model and interior renderings, which show the building’s domed ceiling with a glazed oculus positioned in the top.

The 12-metre-high roof will sit over an auditorium, positioned above a bar and reception area within a drum-shaped portion of the building.
Photograph by Nik Koenig
The entrance area, which will also feature a circular stepped performance space, is to be accessed via an external curving staircase located in a slice taken out of the base of the drum.
Photograph by Nik Koenig
Towards the back of the structure, the cylindrical form will connect to a cuboid – housing further tiered seating for the auditorium and more event spaces.

Dezeen Book of Interviews: Rem Koolhaas features in our new book, which is on sale now

Both volumes feature bands of windows that criss-cross the facades.
Photograph by Nik Koenig
Rem Koolhaas and OMA worked with Brazilian studio Atelier Marko Brajovic to create the Faena Collaboratory, a pavilion on the site where the renderings and model of the scheme and full development are on show.
Located on 33 Street at the centre of the Faena development, Koolhaas’ building will face a beachside condominium tower by Foster + Partners.
Photograph by Nik Koenig
Announced during last year’s Design Miami event, Faena Miami Beach stretches along Collins Avenue from 32 Street and 37 Street, and spans between the Atlantic Ocean and the Indian Creek waterway.
OMA’s two other projects on the site are the Faena Bazaar retail building and Artists-in-Residence Center, and Faena Park, an automated car parking garage.
Photograph by Nik Koenig
Another part of the same development is the renovation of the landmark Saxony Hotel by Hollywood power-couple Baz Luhrmann and Catherine Martin. Nearby hotels Casa Claridge and Versailles have also been acquired by Faena.
Faena Miami Beach is spearheaded by Argentinian hotelier Alan Faena, whose first project was the renovation of a warehouse in Buenos Aires into a boutique hotel.

“Faena Forum has been designed to radiate art and ideas into the community and throughout the city,” said Faena. “It is a new kind of cultural enterprise, one that encourages thinkers and practitioners from across a range of disciplines — the arts, sciences, technology and urbanism — to collaborate and creatively collide in ways that push their practices and produce new works, new experiences, and new ideas.”
The new cultural forum will become a sister institution to the Faena Art Buenos Aires, part of the original development that now spreads along a section of the waterfront in the Argentinian capital.
Faena Forum has also announced the appointment of the Faena Circle, an advisory committee tasked with shaping the new centre’s programme.
The post Rem Koolhaas’ Faena Forum in Miami shown in new renderings and model appeared first on Dezeen.