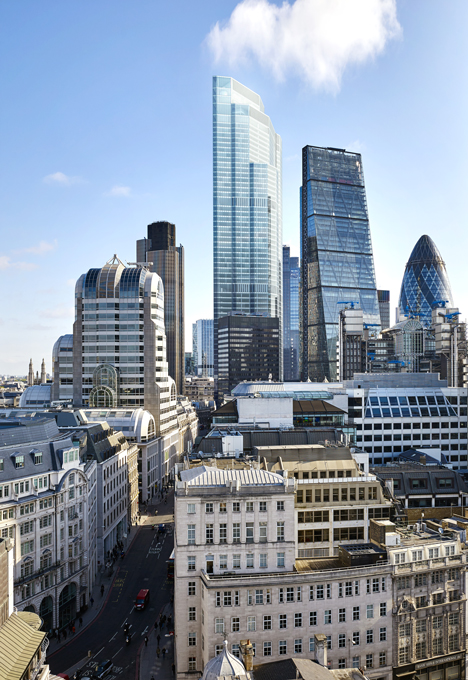 These official images show the skyscraper planned to replace the part-built Pinnacle and become the tallest building in the City of London.

The 278-metre-tall office building at 22 Bishopsgate looks largely the same as in early visualisations of the design by London-based PLP Architecture, which were leaked in February 2015.

At 62 storeys, the glass-clad building is one floor and ten metres shorter than the previous proposal for the site – the KPF-designed tower named the Pinnacle after its helter-skelter-shaped crown.

“The brief from the city was for a quieter, simpler, more elegant building,” said developer Stuart Lipton, who has built more than 30 structures in the city and is now spearheading this project.

The design for the Pinnacle was first approved in 2006 but construction stalled in 2011, after only a seven-storey concrete section of the structure – known as the stump – had been built.

Related story: London’s “Can of Ham” skyscraper back on after six-year hiatus

Lipton and his partner Peter Rogers took over the contract for the site earlier this year as part of a deal reported to be worth £300 million, funded by a group of international investors led by French firm Axa Real Estate.

Their replacement for the stump is designed to have a reduced impact on views across the city, compared to the original scheme. Strict regulations protect sight lines across London, particularly views of St Paul’s Cathedral from various vantage points, which led to the distinctive tapered shape of Richard Rogers’ Leadenhall Building, also known as the Cheesegrater.

PLP’s tower design is intended to incorporate office, retail, cultural and public spaces across its 13 hectares of floor space.

“22 Bishopsgate will be the first vertical city tower in London,” said Lipton in a promotional video for the project. “It will build on the great traditions of the city, but will replicate – in a modern way – all the benefits of a village green.”

The lobby will feature a cultural programme of art installations and theatre performances, while the lower floors will provide shops and services for tenants including restaurants, doctors, dry cleaners and grocers.

At the top, London’s highest bar and restaurant will sit alongside a free public viewing gallery offering vistas over the smaller neighbouring towers, including the Cheesegrater, Rafael Viñoly’s Walkie Talkie and Foster + Partners’ Gherkin.

“On a tower site, one doesn’t have so much public space,” said Lipton. “We need to relate the external space, the public realm, to the internal, so it looks as if it’s one place.”

The flexible floor plans in between all measure at least 1,850 square metres, and feature three-metre-high ceilings. Double-height common spaces will also be provided at intervals up the tower.

The site is set to include parking for 1,600 bikes, as well as changing facilities and repair shops for cyclists. Off-site delivery will aim to further reduce the number of vehicles on the site.

Construction is set to start early 2016, with completion due for 2019 if planning is approved.

London has seen a surge in planned high-rise development – more than 200 towers with a height of 20 storeys or greater are proposed to complete over the next two decades. A campaign has since been formed in protest, calling for a major review and reform of tall buildings policies for the capital.

Images are by Hayes Davidson.