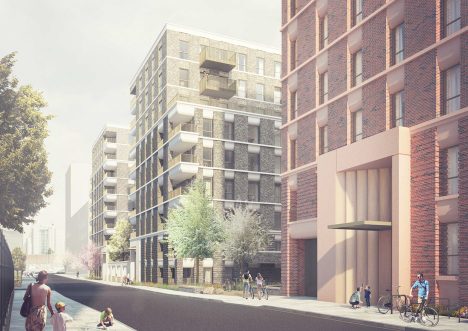 The four buildings will replace Robin Hood Gardens’ western block, while the eastern block will be demolished during the third development phase.

The blocks are designed to “share a common architectural language” but to differ in style, creating “two distinct architectural quarters” for the site. Images show brick structures in varying tones.

The grassy mound at the centre of the estate will be retained as an amenity for residents.

The projects marks the end of a failed campaign to save Robin Hood Gardens, which was the only housing estate by the Smithsons that came to fruition. Their design was based on the Brutalist concept of “streets in the sky”, with covered walkways on each level of housing.

High-profile architects including Richard Rogers, Zaha Hadid, Robert Venturi and Toyo Ito all signed a petition to have the complex heritage listed. Rogers described it as post-war Britain’s “most important” social housing development.

“We respect the legacy of the Smithsons and have been all too aware of the intellectual challenge involved in working on Blackwall Reach,” said Toby Johnson, a director at Haworth Tompkins.

“However, we have worked closely with Metropolitan Workshop and Swan Housing to deliver a scheme that will preserve and enhance the open space and the heart of the estate, improve the relationship the new buildings make to the surrounding streets and provide better homes for the existing residents of the estate, as well as additional homes to meet the demand in this fast changing part of London.

“We think these proposals will improve the quality of life for those living on and near the estate and support the wider regeneration of Blackwall Reach,” he added.

Swan Housing has now submitted a planning application to the London Borough of Tower Hamlets.

The scheme forms part of a five-phase regeneration project, aiming to create a total of 1,575 new homes, along with commercial properties and community facilities. The first phase was completed in 2015.

“Metropolitan Workshop and Haworth Tompkins were selected as joint architects for the next phase of Blackwall Reach because of their track record of delivering high quality urban design and architecture in residential and mixed-use projects,” he said.

“We believe their designs complement each other and show commitment to the art of making beautiful, sustainable buildings.”

Howarth Tompkins won the UK’s most important architecture prize in 2014 for its Liverpool Everyman Theatre, and was also behind the refurbishments of the Denys Lasdun-designed National Theatre and Powell & Moya’s revered Chichester Festival Theatre.

Metropolitan Workshop is based in London and was founded in 2005 by Neil Deely, David Prichard and Tim Peake. It has completed a range projects in Norway and Ireland, as well as UK housing schemes.