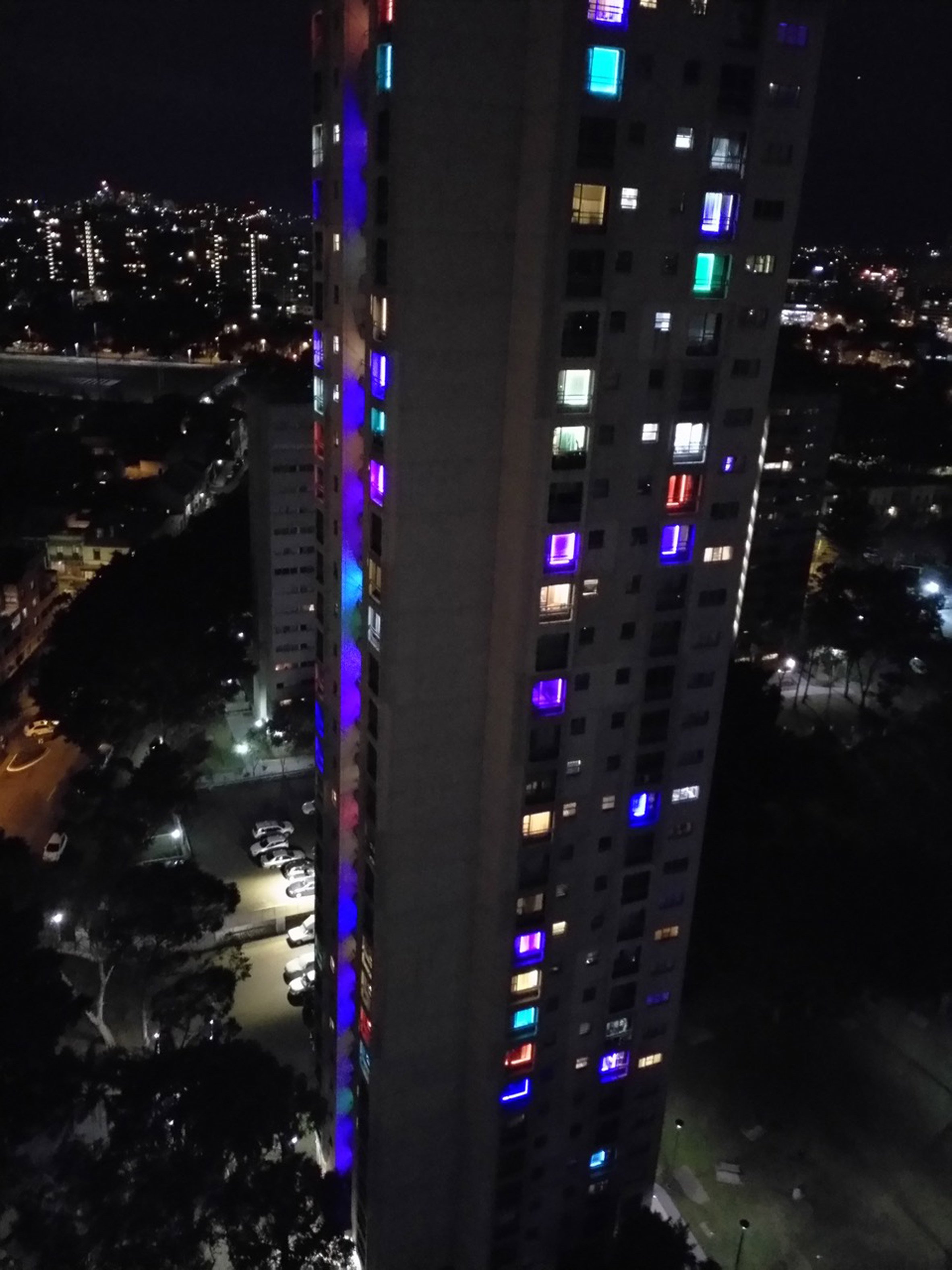 Night after night, the windows of the tower blocks that make up the Waterloo Estate in Sydney have been gradually lit up in different colours as part of a public art project that aims to make the community more visible.

Triggered by the NSW state government’s plans to redevelop the area, the #WeLiveHere2017 project has been gaining traction over the past few months and will now officially launch on Saturday night.

Five hundred residents in the Waterloo Estate’s 60-storey Matavai and Turanga towers have been given coloured mood lights to hang in their windows. The colour of the lights is intended to express how they feel about the state government’s plans.

The redevelopment, which was announced just before Christmas in 2015, will begin with a new metro station that will be located adjacent to the estate.

Currently in the masterplanning stage, the project will involve relocating at least 3,600 elderly, disabled and low-income residents – a process that is expected to begin in 2018.

The #WeLiveHere2017 project was set up by local resident Clare Lewis and supported by a team of local volunteers – residents of both public and privately owned housing.

The team hopes that the project will raise awareness of the community who are living across the 40-acre estate’s six large tower blocks and numerous low-rise dwellings while generating important discussions about the people affected by urban renewal projects.

“What started out as a public art project to make connections in the Waterloo Estate community took on new meaning and importance when the state government’s plans to redevelop the area were announced,” the project’s producer and local resident Carolina Sorensen told Dezeen.

“The proposed development will see a huge increase in density and a change of ‘social mix’ with the introduction of a large proportion of private housing and commercial properties.”

The light project, which began in early 2016, gained the support of the Waterloo Public Housing Action Group (WPHAG) as well as that of key residents early on. The first lights were installed in October 2016 and after a crowdfunding campaign in December 2016, the number of lights has been slowly increasing in number.

In late July 2017, the City of Sydney, through its Art & About programme of creative events, provided vital extra funding that has helped to galvanise the project.

“We chose the Matavai and Turanga towers to represent the whole estate as they are the tallest and most visible,” said Sorensen. “They were purpose-built for elderly residents, and I don’t think I’ve met anyone living there who is under the age of 65.”

As of Thursday night, the team had installed a total of 253 windows out of a possible 574. Set on timers, from 5:30pm to 11pm each night, the windows have been gradually lighting up the skyline.

“The Waterloo Estate is often overlooked, and we felt that what was happening was getting swept under the carpet,” said Sorensen to Dezeen.

“We hope this project makes people aware that this is actually happening and that the voice of the people living here can be heard. When this development goes ahead we want the wellbeing of the existing community to be put front and centre in terms of priorities.”

“Much more broadly, we want to humanise the discussion around public housing,” continued Sorensen. “The idea of putting an individual light in each person’s window that they can control shows that they are here and that this is their home. People talk about how ugly the buildings are endlessly, but what we care about is the people who are living there.”

Clare Lewis has also been filming a documentary throughout the course of the project that will be released on ABC Arts in 2018.

“About 40 years ago the Estate was all terrace houses that were deemed to be slums,” explained Sorensen. “They were demolished to make way for the high-rise buildings you see here today.”

“It really tore the heart out of the community at the time, and now they’re saying that these towers are a problem that need to be fixed. So there seems to be an ongoing obsession with redevelopment that needs to be examined.”

The light project follows a tent embassy (a type of semi-permanent assemblage that has been used since 1972 to represent the political rights of Aboriginal Australians in various locations) at Waterloo Green that was set up by the public housing tenants shortly after the government’s redevelopment plans were announced.

Led by WPHAG and with the support of the Redfern-Waterloo Aboriginal community, the tent embassy was set up to resist the destruction of residents’ homes and their community.

Land values in Sydney have been increasing at a faster rate than anywhere in Australia, with house prices in the inner-city neighbourhood of Waterloo growing by 16.21 per cent in the past three years according to a report by an Australian housing website.

Sydney’s Sirius building saved from demolition in “triumph for brutalism”

The post Residents of Sydney high-rise estate use lights to protest against gentrification appeared first on Dezeen.