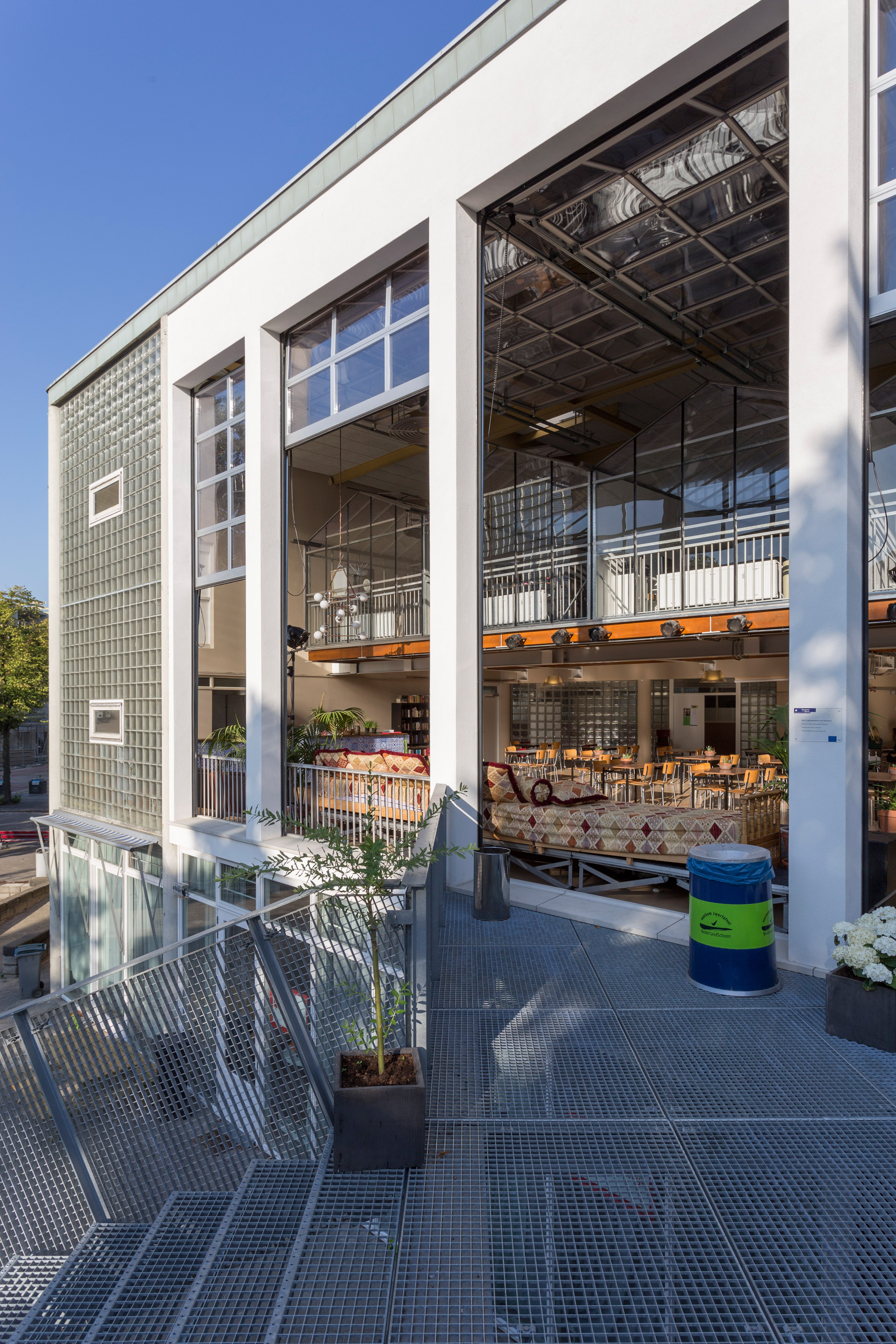 Dutch studio BETA has transformed an old school in Amsterdam into a hub for entrepreneurs featuring full-height windows that can be retracted to open the entire facade.

The Ru Paré School is located in the city’s Slotervaart neighbourhood.

As part of a process aimed at revitalising the area’s urban design and community feel, local enterprise foundation Stichting Samen Ondernemen asked the architects to convert the disused school building into a hub for small businesses.

“In the early 2000s, the Ru Paré School was emblematic of the social problems facing the borough of Slotervaart,” said BETA. “The Ru Paré is now the neighbourhood’s living room and accommodates an extraordinary social experiment.”

BETA teamed up with urban strategist Elisabeth Boersma to organise workshops with the local community that ensure the centre’s design responds to the needs of its users, including start-up companies whose rent contributes to the building’s upkeep.

The building’s configuration of classrooms arranged along a large corridor was ideal for adapting to individual offices.

On the first floor, the school’s former gymnasium has been transformed into a lobby accommodating cafe seating, as well as a stage containing a comfortable sofa area.

The incorporation of the main public functions into the gymnasium freed up other areas to be divided into more marketable compact units, as well as creating a welcoming space at the core of the building.

“By employing the economically less viable but spatially extraordinary gymnasium as a foyer, accessibility and visibility were increased whilst forming an attractive public interior,” said the architects.

To facilitate the gymnasium’s new functionality, it was necessary to relocate the entrance by adding a set of metal steps leading up from the adjacent plaza.

A row of garage-style retractable doors fitted with windows enables the space to be fully opened up to the outdoors. The doors roll down from the ceiling of the double-height space to seal off the interior when required.

A mezzanine level supports a cluster of greenhouses that hover above the gymnasium. The glass surfaces of these structures ensure they receive plenty of natural light from the transparent facade.

A social enterprise called KlusLAB, which trains people in joinery skills, was formed during the community input sessions, and was subsequently involved in the building’s refurbishment.

Students from the Amsterdam University of Applied Sciences also led a project aimed at salvaging materials from a local demolition site, which were then used in the Ru Paré interior to reduce costs and waste.

Photography is by Marc Faasse.