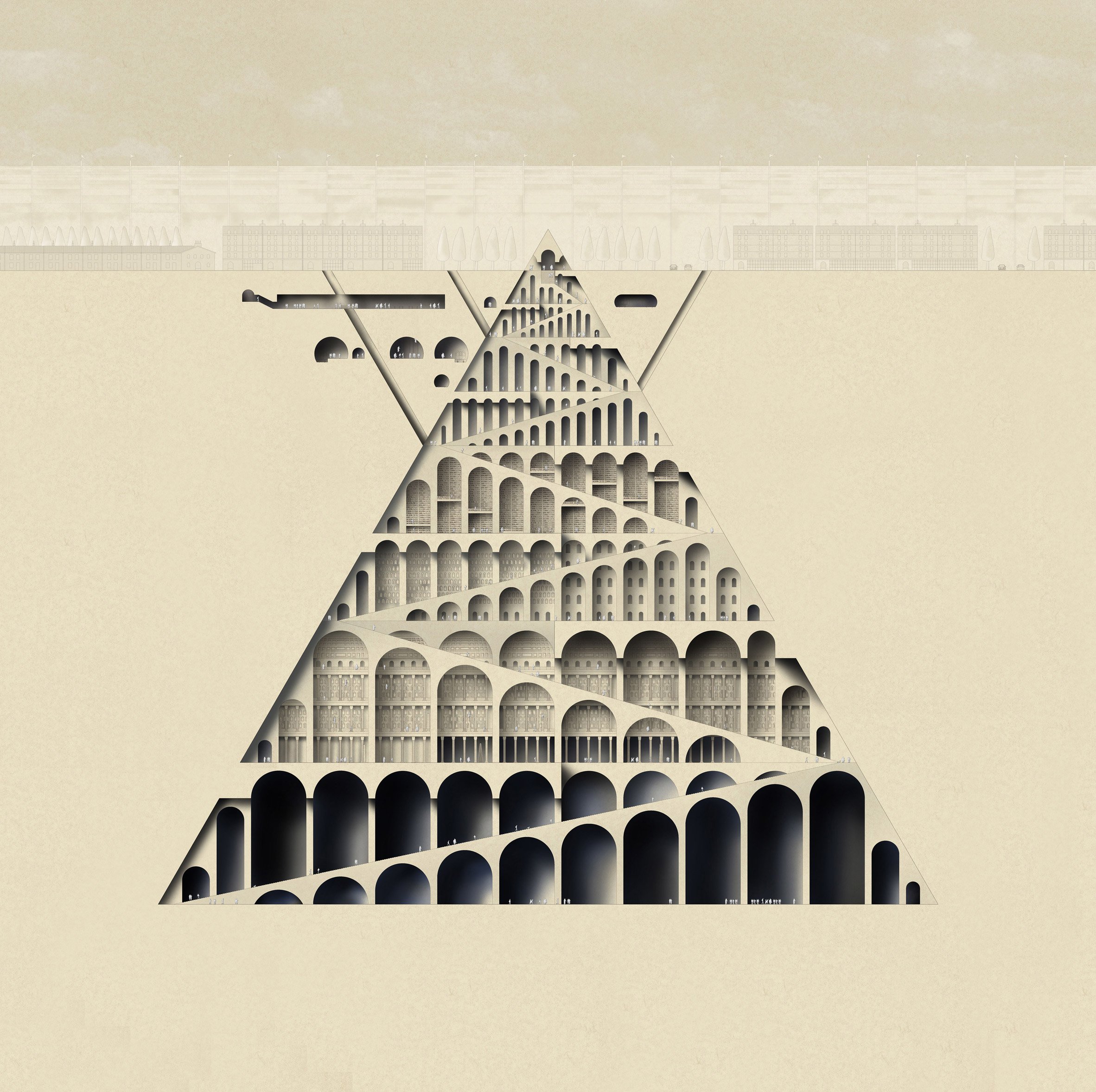 A proposal for craft workshops at London’s V&A museum, an extension to Sir John Soane’s Museum and a dystopian graphic novel are among the winning projects in this year’s RIBA President’s Medals and Research Awards.

The seven student winners were announced at a ceremony at the Royal Institute of British Architects in London this evening. The Part-I and Part-II architectural students were selected from 275 entrants from 87 schools worldwide.

Six of the seven winners are from UK schools, but the recipient of the biggest accolade – the Silver Medal – is a student at The Chinese University of Hong Kong.

“I’m delighted to see the breadth of talent from across the globe recognised through these awards, now celebrating their 180th anniversary,” said RIBA President Jane Duncan.

“The students’ ability to distil complex ideas and present them beautifully is outstanding. Tonight’s winners are talent to watch – I can’t wait to see what else they will go on to achieve.”

Set up in 1836, the RIBA Presidents Medals are the institute’s longest-running awards.

The seven winning projects will be on show at the RIBA until 5 February 2017.

Read on for information about each of the winners:

The award for best Part-II design project went to Thomas Chee from The Chinese University of Hong Kong for his project Crafts Vault: The V&A Academy of Artisanal Crafts.

Tutored by Peter Winston Ferretto and Ingrid Schroder, Chee’s project proposes a suite of craft workshops at London’s V&A museum. The proposal responds the threat the 2008 economic downturn and new technology brought to the craft industry.

“Responding to the uncertain future of traditional crafts industry in the UK threatened by the economic downturn and the rise of new manufacturing technologies, the proposal by introducing crafts workshops into a new extension of the Victoria & Albert Museum in London, tries to promote a new typology of museum building for storing and exhibiting crafts that could help bringing the lost touch of crafts back to the modern city,” said Chee.

The medal for best Part-I design project was awarded to Allan Chong from Newcastle University for Formless – An Alternative Typology for Preservation.

The project, for which Chong was tutored by Josep-Maria Garcia-Fuentes and Aldric Rodriguez Iborra, imagines London’s Soane Museum in 2065 following an extension.

“This project takes a theoretical path in creating an alternative typology for preservation. It introduces a compromise between the desire for preservation and the cultural shift necessary for architectural expansion in the city’s future,” said Chong.

“Interpreting the concept of ”formless’ in preservation means that architecture and heritage are no longer seen as permanent objects, but they keep transforming to re-frame their key spaces.”

The Dissertation Medal went to Roy Khatchadourian of the University of Liverpool for his thesis titled A Juxtaposition of Ideological Expressions: Evaluating the Urban Transformations of Yerevan (Armenia) During 1915-2015.

Tutored by Iain Jackson, Khatchadourian focuses on the role of architecture in creating a sense of identity following political oppression in the Armenian city of Yerevan.

“What determines our sense of belonging to a territory? How can an identity be maintained, or created? Yerevan – the crown jewel and capital city of Armenia – has been grappling with these issues in a quest of rediscovering its national pride, after years of political oppression, even genocide,” explained Khatchadourian.

“This dissertation explores the role of architecture in this endeavour through Alexander Tamanyan’s work, an overlooked master whose contribution forms today’s city branding…”

An award of two parts, the drawing award for a Part-I student went to Lucian Mocanu from the University of Greenwich. Tutored by Rahesh Ram and Tom Noonan, Mocanu’s project titled New Greenwich Civic Centre: A Transformative Architecture is a new urban centre for the Royal Borough of Greenwich.

“The project seeks to question the very nature of Greenwich’s relationship with the past by proposing an alternative. The project proposes a new modern civic centre that, unashamedly, caters for the modern age and places adaptation, flexibility and modern technology at the centre of its agenda,” said Mocanu.

“The architecture is conceived as a ‘puppet’; an architecture of transformation that can be manipulated for the needs of modern society.”

Part-II student James Bussey from the University of Kent was awarded the second drawing prize. Tutored by Adam Cole and George Thomson, his dystopian graphic novel The Company explores architecture through the a fictional character, a German revolutionary exiled to the island of Helgoland.

“This project imagines the impact of an exiled German revolutionary from 1848. It is inspired by Joseph Conrad’s Heart of Darkness and explores many themes: power and control in architecture, isolation, politics, religion, social class and Potemkin villages,” said Bussey. “The architecture is experienced from the perspective of a fictional character named Elisa Hecker.”

“The Chicago Music House aims to restore this music cultural heritage to central Chicago to provide a platform where music is the means for social interaction,” explained Bailey.

“The early 20th century Great Migration of six million African-Americans from the rural South to industrial cities such as Chicago gave rise to a new genre of music, an urban blues evolving from the classic blues which originated in the Mississippi.”

Part-II student Shenpei Ha from the The Cass at London Metropolitan University was awarded the second SOM fellowship.

“This proposal is for a salt farm onsen (hot springs) that will help facilitate the restoration of Miyato Island after the 2011 Tohoku Earthquake and the subsequent Tsunami in Eastern Japan,” explained Ha.