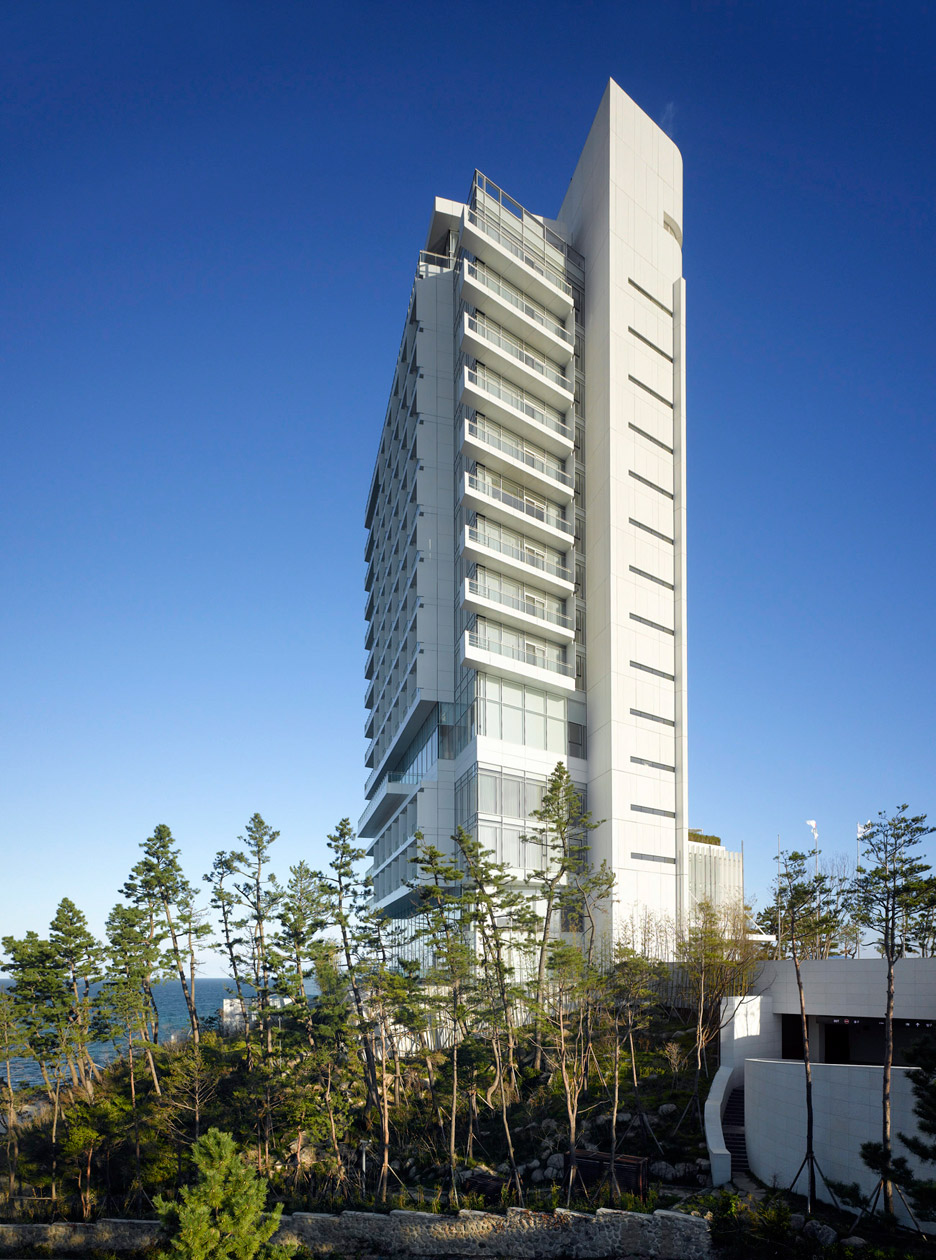 American architect Richard Meier says his first Korean project, the Seamarq Hotel, has qualities that are similar to influential homes he designed in the 1960s and 70s (+ movie).

Located in Gangneung, South Korea, the hotel is 60 kilometres from the city of PyeongChang, which will host the 2018 Winter Olympics. Meier’s hotel is part of a revitalisation effort in the region in preparation for the international sporting event.

This is the Meier’s first project in Korea.

“Our primary goal for the Seamarq Hotel has been to create a strong sense of place by enhancing and transforming the existing site in a dramatic way,” said Richard Meier, who established his eponymous New York-based practice more than 50 years ago. In 1994, he received the Pritzker Prize.

“Many of the cues for the design came from the site — its light, its landscape, its topography,” the 81-year-old architect said.

Meier said the Seamarq Hotel relates to some of his earlier projects, such as the Smith House (1967) and the Douglas House (1973), which have open living spaces, transparency, and “an openness to the nature around the site”.

“In my work I seek to find through design the best of what exists and what can be,” said Meier. “My purpose is to deliver thoughtful, original modern architecture that is as accessible as it is beautiful, as humanist as it is disciplined.”

The Seamarq Hotel consists of two main buildings – the 11-storey Hotel Tower and the four-storey Banquet Hall – and several supporting facilities, which are all situated on a hill dotted with pine trees. The buildings are mostly made of glass, concrete and stone.

“The forms expressed in a light and white colour palette will make the building transform throughout the day in the interplay of light and the surrounding context,” the architect said.

The programme includes 150 guest rooms, a restaurant, a spa, indoor and outdoor swimming pools, a banquet room, an exhibition hall and an amphitheatre.

Trapezoidal in form, the Hotel Tower’s geometry follows the contours of the hill. The building consists of a seven-storey tower anchored to a four-storey base.

On the fifth floor, a large outdoor deck acts as a transitional zone between the podium and tower. This sun deck, which features an infinity pool, also offers panoramic views of the picturesque landscape.

“The water view takes priority, so that all of the public spaces and all the living spaces open up to the water,” said Meier.

While the Hotel Tower is designed to emerge from the ground, the Banquet Hall is designed to be more embedded in the landscape. Composed of three floors and a rooftop pavilion, the building has a crisp angular shape.

Its porte-corchere leads into a grand, two-storey lobby with a wraparound deck. Floors below the lobby contain a restaurant with views of the beach and a spa that opens up to dense vegetation.

“Because of the mostly cool, minimal colour palette of the architecture, the lighting was used to highlight all warm elements, such as the wooden feature stairs and wooden ceiling panels, to bring warmth to the interiors,” said Meier.

“With this hotel we aspire to create something new and innovative,” said Meier. “The Seamarq Hotel I hope is a transformative project for the region and Korea.”

Other recent projects by Meier include a 163-metre skyscraper that is now underway in Taiwan and the design of 25 apartments for Oaks Prague, a major developing near the Czech capital.

In 2014, Meier created a private museum and library in New Jersey to house his vast collection of models, sculptures, paintings and books.

Photography is by Rolande Halbe.

The post Richard Meier’s first project in South Korea is a waterfront hotel for the Winter Olympics appeared first on Dezeen.