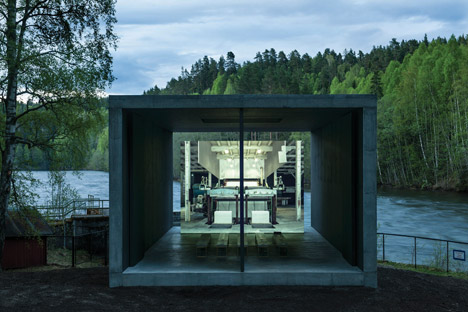 Exactly 30 years of footage of a paper pulp press in action is being projected onto a concrete screen inside this pavilion, created by A2 Architects and artist John Gerrard on the site of a former paper mill (+ slideshow).

Pulp Press is a permanent site-specific commission for the Kistefos Museum in Oslo, designed by Dublin office A2 Architects in collaboration with Irish artist John Gerrard.

The museum and sculpture park are situated on the grounds of an former 19th-century industrial papermaking mill in Jevnaker, a municipality one hour north of Oslo.

The cast-concrete pavilion, which measures 13-by-6.5 metres and stands at five metres tall, sits at an angle to an existing boathouse on the banks of the River Rand, which originally provided the power source to run the mill.

It has two open ends – one faces the old mill building and is sealed by three black wooden doors pivot between the floor and ceiling slabs to seal the space, while the other opens onto the river.
“One arrives at the pavilion to be presented with a shuttered, camera-like front consisting of a trio of pivoting pre-stressed plywood doors,” said the architects.

Inside, the walls have been treated with a black pigment to create enough darkness for a large projection screen.
Digitally altered footage of the mill’s original paper press in operation plays on the surface of the free-standing concrete wall, which partially blocks the view to the river.

“The projected work within is a hyper-realistic portrait of the machine, decommissioned in 1950, and painstakingly remade as a virtual form,” said the architects.
“It has even been renovated within the virtual to function once more. Pipes have been replaced, valves sourced, missing components researched by the production team for over a year and all recreated in simulacra,” they explained.

Rows of benches with slim concrete seats and brass legs sit at right angles to the screen on the polished concrete floor. The form of the benches are intended to emulate the bales of paper pulp once produced by the mill.
Thirty small bronze disks are set into the surface of the concrete seats. Each is a canister for an aluminium disk that holds one year of video footage for the projection, which has a 30-year span.

The projector is recessed in the thick concrete roof and is powered by hydro-electricity from the river – the same power source that facilitated the opening of the paper mill in 1889.
Gaps at either side of the projection wall provide access to a slim balcony fronted by a glass balustrade overlooking the river. A concrete bench built into the back of the wall is sheltered by the overhang of the flat roof.

“A cast polished concrete bench allows the public to rest and relax while re-adjusting to the real world having experienced the projected virtual world of the pavilion,” said the studio.
Photography is by Jiri Havran.