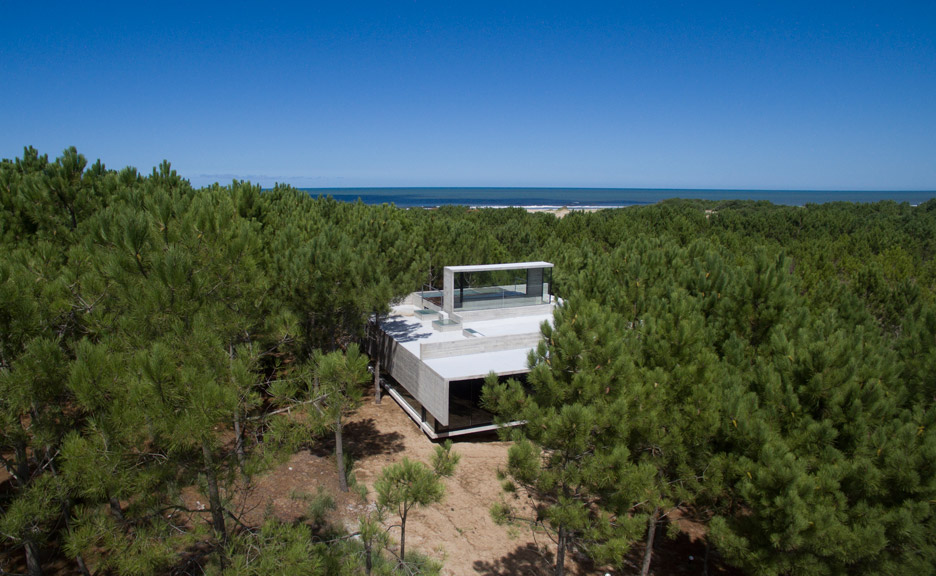 Architect Luciano Kruk and his girlfriend Ekaterina Künzel designed themselves this concrete holiday house, which is set among a grove of maritime pines on the Argentinian coastline (+ slideshow).

“After building several houses in Costa Esmeralda, and captivated as we were by the place, my girlfriend Ekaterina and I set up to design one for ourselves there,” said Kruk, who set the house behind a screen of pine trees.

“We agreed that the trees and the terrain’s particular topography were jewels the architectural project should respect,” he added. “We wanted the house to lie amid the woods, surrounded by the place’s immanent atmosphere.”

The front and rear of the rectilinear building are enclosed by glazed walls that frame views of the trees and dune landscape, while its sides are blinkered by flaps of board-marked concrete that overhang the glazing to provide shade and privacy.

Inside, four bedrooms with separate bathrooms are set in the four corners of the plan and a large central living space opens onto partially sheltered decks.

Clerestory glazing and narrow strip skylights allows natural light to filter between the bedrooms and living room while maintaining separation.

A cast concrete staircase divides this space in two, with the kitchen and dining room on one side and the living room on the other. Niches and furniture are built into the living room walls and stairs, which emerge into a glazed box that protrudes from the roof.

Here, a pair of pools, sundeck and outdoor shower area give views of the shore and mature forest.

“The crystal box containing the stairs bathes the social area’s centre in sunlight,” said the architect.

“Embraced by the pines’ canopies, a peaceful contemplation space unfolds on the rooftop. Due to the transparency of the box containing the stairs, views in all directions can be experienced.”

“We built a box amid a slice of nature and, by letting the exterior flow in and out through it, we made it a constituent part of its environment,” he added. “Thus, the box and its surroundings merge and vibrate in consonant harmony.”

Photography is by Daniela Mac Adden , unless stated otherwise.