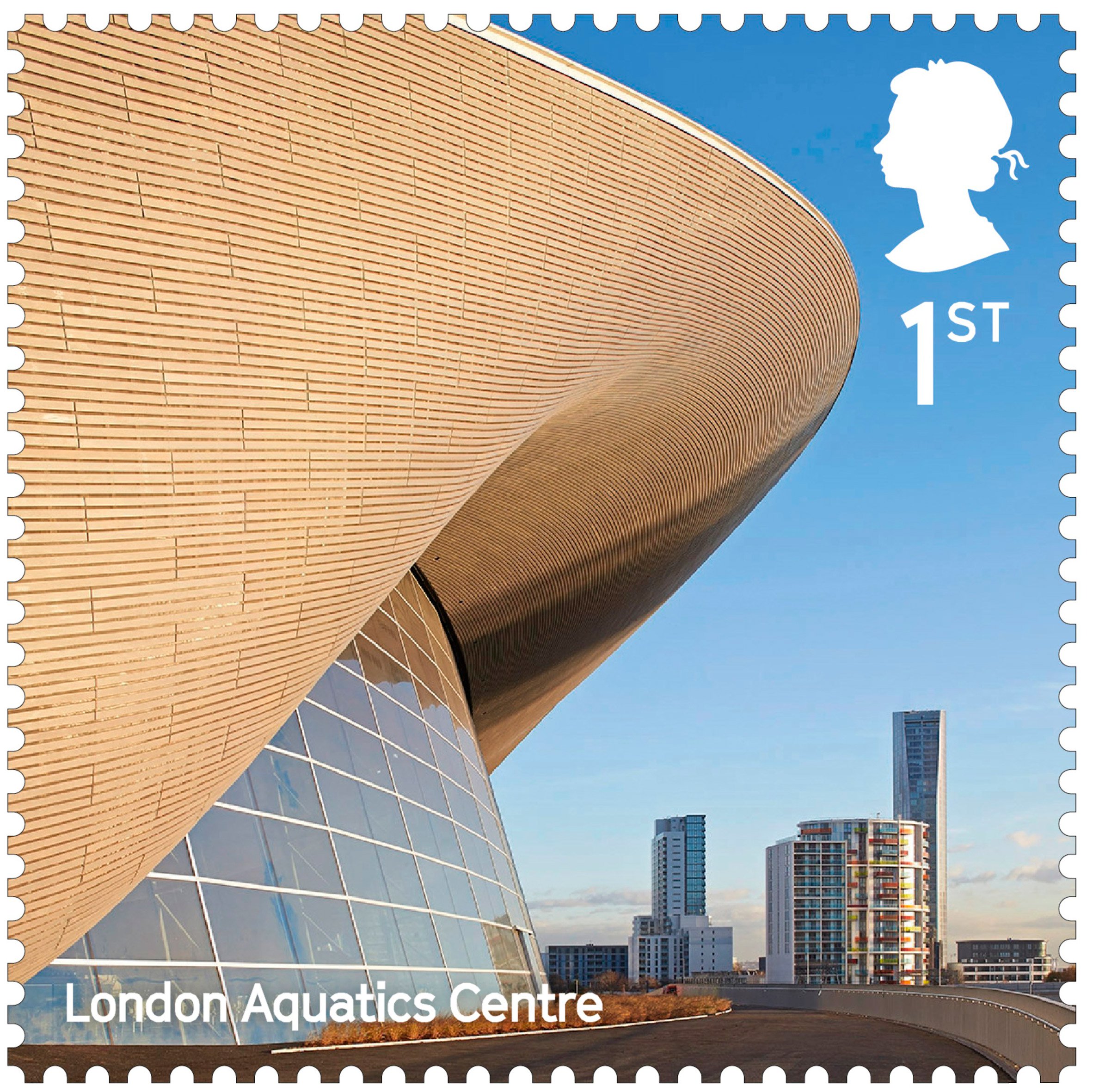 Mark Bonner of design studio GBH told Dezeen: “For us it was all about understanding the architect’s inspiration for each building and trying to summarise their intentions within one single image.”

“For instance, with the Imperial War Museum North we knew that Daniel Liebeskind’s three forms represent the violence of war and conflict on land, sea and in the air, and we passionately wanted to represent all three within the image.”

British photography duo Hufton + Crow, who completed a set of stamps featuring UK bridges for Royal Mail in 2015, were asked to shoot the buildings.

“We had already shot a few of the buildings but GBH briefed us on behalf of Royal Mail and we were sent back to revisit each building and shoot with a square stamp format in mind,” said Allan Crow, who has partnered with Nick Hufton for nearly 20 years.

“Using our tilt and shift lenses, and shooting two frames and stitching them together in postproduction, produced the desired square format and lent itself well to this task,” he told Dezeen.

Hufton + Crow delivered several options from each location that were then presented to Royal Mail who made the final decision on which images to use. Hufton + Crow’s images were selected for 8 out of the 10 stamps – the Giant’s Causeway Visitor Centre was photographed by Mark McCall, and the Eden Project was captured by Hangloose.

In some cases, the photographers went to great lengths to achieve the perfect shot. “Hufton + Crow  had to visit the Imperial War Museum twice in order to get the right shot,” Mark Bonner told Dezeen.

“We found it was very difficult to get all of its curves coming together beautifully in one image, so we used Google Earth to examine all of the possible angles in 3D. We realised that if we could get a photographer high enough up in a neighbouring car park we could get a specific view where all of the curves work together.”

“We hired a cherry picker to raise Hufton + Crow up 30 feet in the air to get this shot. They arrived early in the morning and shot until the evening to catch the sunset just as it lit the red stairwell. It’s a totally new viewpoint.”

Similarly, GBH worked with local zip wire company Hangloose to get a unique perspective of the Eden Project.

“From the zip wire you could see that the vegetation was growing both inside and outside of the biospheres, which look as if they were just dropped on top of this organic matter,” Bonner explained. “In the end we used a picture taken by one of the employees of the zip wire company.”

The Special Stamp Collection was commissioned in celebration of what the Royal Mail describes as “a surge in the construction of new public buildings in the UK”  that has taken place over the past two decades, as well as “a renewal of confidence in British architecture led by world-famous architects.”

Serving culture, sport, government and business, the buildings were chosen for their adventurous structures as well as the way in which they have become integral parts of their local landscapes, often playing a part in regeneration.