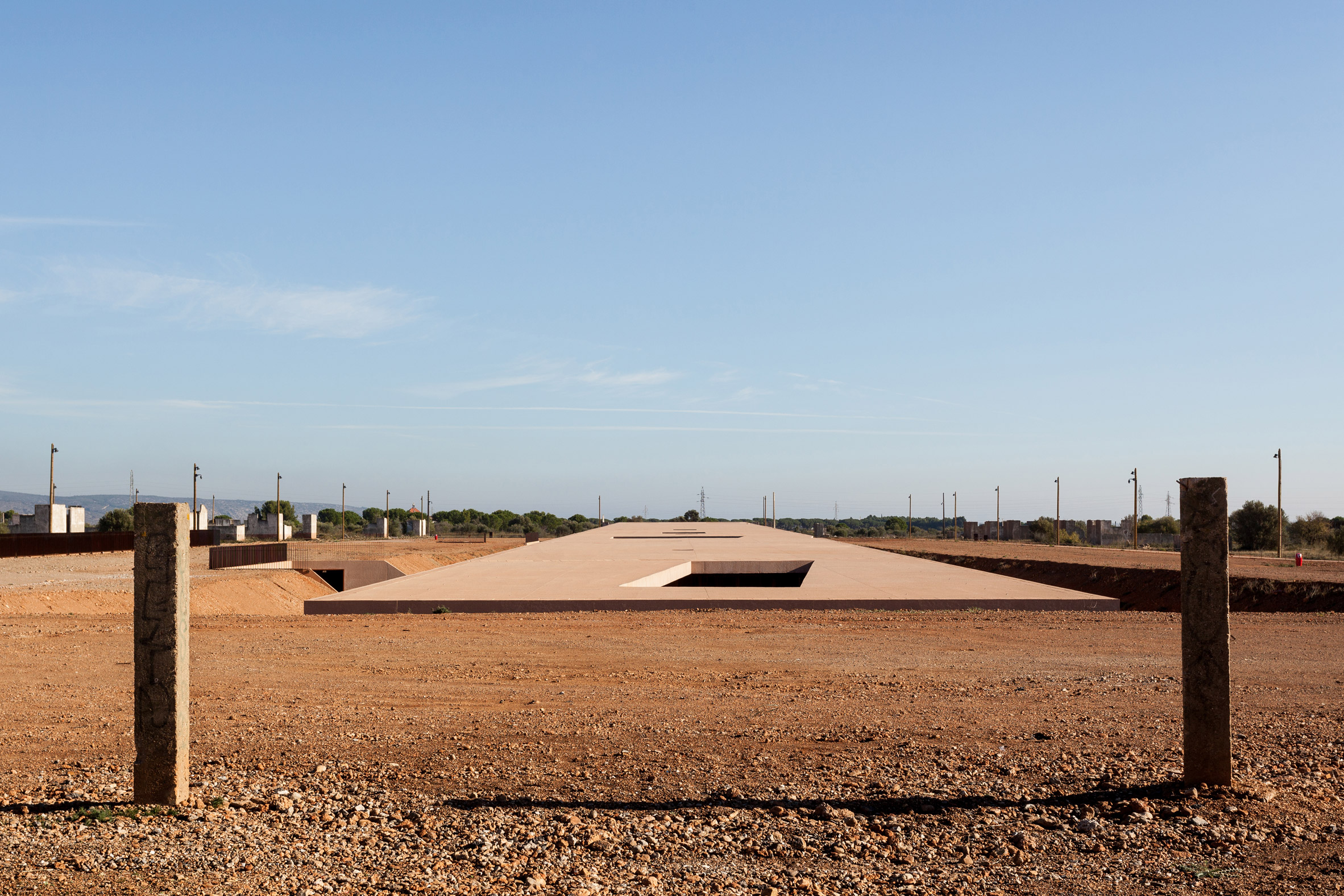 This museum on the site of a former French military and internment camp near Perpignan comprises a 240-metre-long concrete block with large openings puncturing its gently inclined roof.

The Rivesaltes Memorial Museum was designed by architect Rudy Ricciotti and completed in 2015. It is among the five finalists for the 2017 Mies van der Rohe Award 2017.

The building faces the former F-block, on a site surrounded by derelict buildings that were used to intern gypsies, Jews and Catalan refugees during the second world war.

Described by the architect as “silent and ponderous”, the monolithic concrete structure is partly submerged in the ochre earth.

The building rises above the edges of the furrow in which it is positioned to a height equivalent to that of the roofs of the old barracks.

“The Memorial of Rivesaltes, compressed between earth and sky, between past and memory, is located exactly in the present and the life itself,” said Ricciotti. “In this desert environment, a few dozen metres away, it no longer exists.”

Visitors enter the site at the southwest corner, where the roof of the museum can be seen stretching away into the distance, as if it is part of the existing landscape.

A ramp that is partially buried in the ground emerges into an enclosed entrance courtyard with a view along the length of the imposing structure.

The solid concrete volume was cast in place using a technique that achieves smooth surfaces without any evidence of the formwork holes resulting from typical construction methods.

The building has no external windows, so all aspects are inwards or up towards the sky from a series of three patios paved in herringbone patterned red brick. Learning labs, social spaces and offices are arranged around these day-lit patios.

An auditorium positioned close to the entrance features stepped timber seating that merges with the flooring of the stage area.

A long corridor that extends along one side of the building leads towards the dimly lit main exhibition hall, where films are projected onto the large walls. A long back-lit display is positioned between pillars at the centre of the room.

Ricciotti previously collaborated with Italian architect Mario Bellini on the new Islamic art galleries at the Musée du Louvre in Paris, which are contained beneath a wavy golden roof slotted into an existing courtyard.

Other projects shortlisted for the Mies van der Rohe Award include a building with a large clay-tiled roof constructed over the remnants of a 12th-century monastery in Denmark.

Photography is by Kevin Dolmaire unless otherwise stated.