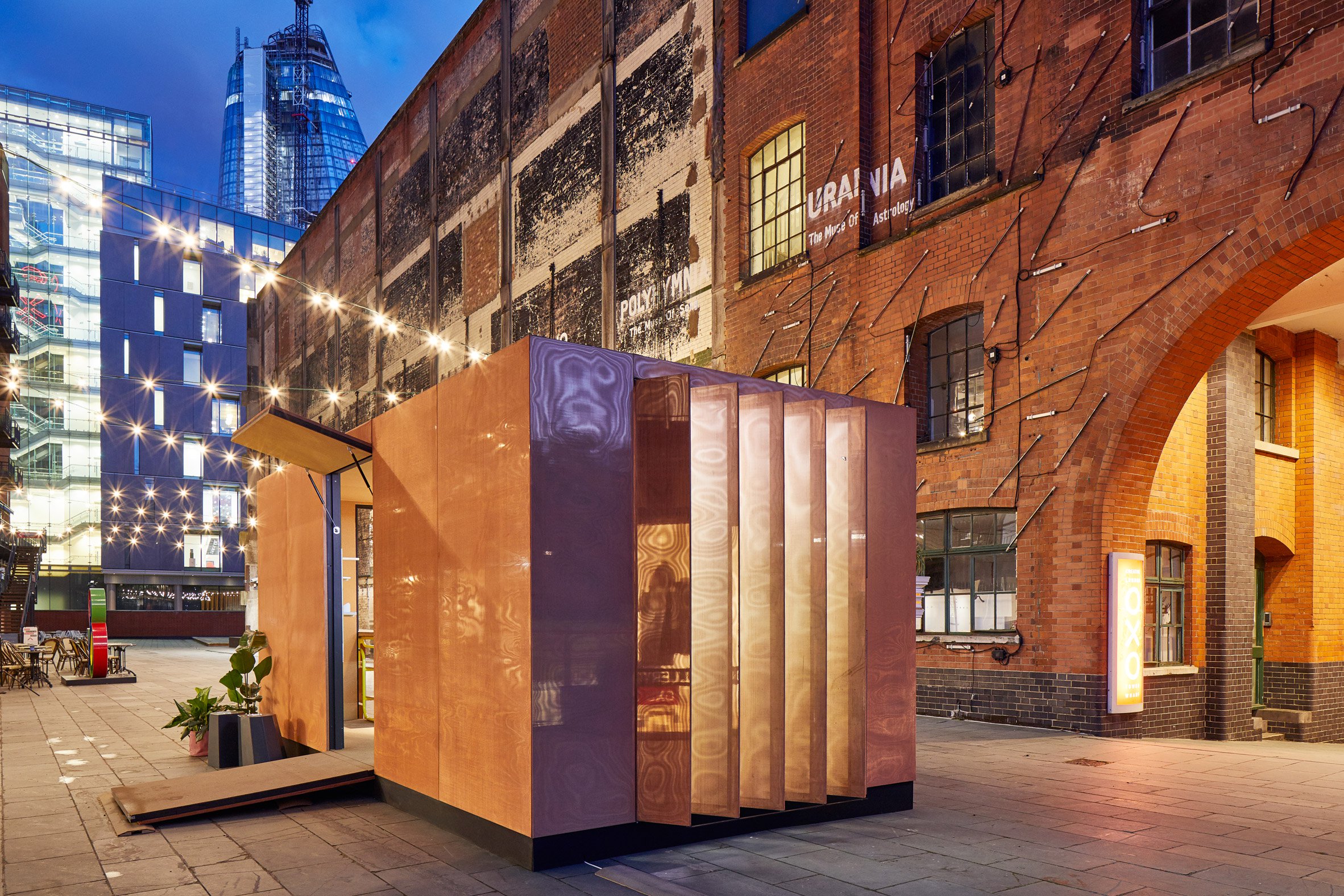 A miniature library adjoins this tiny home that architect Sam Jacob and car brand MINI have built for this year’s London Design Festival.

MINI created the 50-square-metre Urban Cabin as part of its ongoing MINI Living project, which is exploring new forms of urban living. The tiny cabin is designed for a future when homes become a shared resource.

Jacob was asked to make alterations to the cabin, to give it a distinct personality. His response was to attach a mini library onto one side, as a reaction to the closure of many of England’s public libraries in recent year, due to digitisation and funding cuts.

The library is made out of a range of materials that are stacked together like bookshelves. Terazzo forms the base, while other layers are made out of expanding foam and translucent acrylic.

“The idea of the library is that it’s actually built in the same way as the shelves work, so the materials are stacked almost as if they were books,” Jacob told Dezeen at the opening of the cabin today.

“It’s almost like a materials library,” he added. “It starts more solid and it gets more transparent as it goes up.”

The rough textures of Jacob’s library provides a stark contrast to the exterior of the cabin, which is covered in copper panels and copper mesh, to provide reflections of the surroundings.

Jacob made other adaptations to the tiny residence, inspired by London life. For instance, a table folds down at the rear to form an informal outdoor dining area, in tribute to the city’s food markets.

The table is made from “wood terrazzo”, which comprises shards of wooden floorboards set in blue resin. It extends into the cabin’s interior to create a work surface with storage cabinets below.

A diagonal cut in the wooden flooring separates this kitchen space from the other side of the cabin, where a hammock hangs below a skylight. Residents can read in the hammock, while enjoying views outside through folding louvres.

Inside the library, the shelves are filled with books relating to London – ranging from Mary Poppins to texts by Design Museum director Deyan Sudjic.

“It’s the personality,” said Jacob. “You know when you go to someone’s house and you look at their bookshelf? You can really find out what kind of person they are from the kind of books they have on their shelf.”

“London isn’t a story authored by one person, in a way it is a little bit like a library,” he added.

“It’s many many voices, and allowing all of those voices to be present simultaneously is, I think, absolutely key to maintaining London as a diverse and exciting and engaging and inspiring city.”

Sam Jacob is principal of Sam Jacob Studio, and a professor of architecture at University of Illinois at Chicago. The London-based architect and Dezeen columnist was formerly a director of the now-defunct FAT alongside Sean Griffiths and Charles Holland.

His other recent projects include a pop-up mausoleum in Highgate Cemetery and a replica refugee shelter in Venice.

His Urban Cabin is on show at the Oxo Tower Wharf Courtyard for the duration of the London Design Festival, which runs from 21 to 24 September 2014. During this time, the mini-library will function as a book swap.

It is the latest in a series of structures that MINI has built as part of MINI Living. The first was an installation at Milan design week in 2016, which also explored the idea of shared living spaces.

At last year’s London Design Festival, the brand worked with architect Asif Khan to install “forests” in see-through boxes across east London, while earlier this year it teamed up with SO-IL to create a prototype for an air-filtering house.

MINI are planning to build more Urban Cabins in other cities. The next will be erected in New York, coinciding with the city’s architectural Archtober festival.

Dezeen has also teamed with the MINI Living Initiative, in a year-long exploration of how architecture and design can contribute to a brighter urban future.

The post Sam Jacob and MINI team up to create micro home with attached library appeared first on Dezeen.