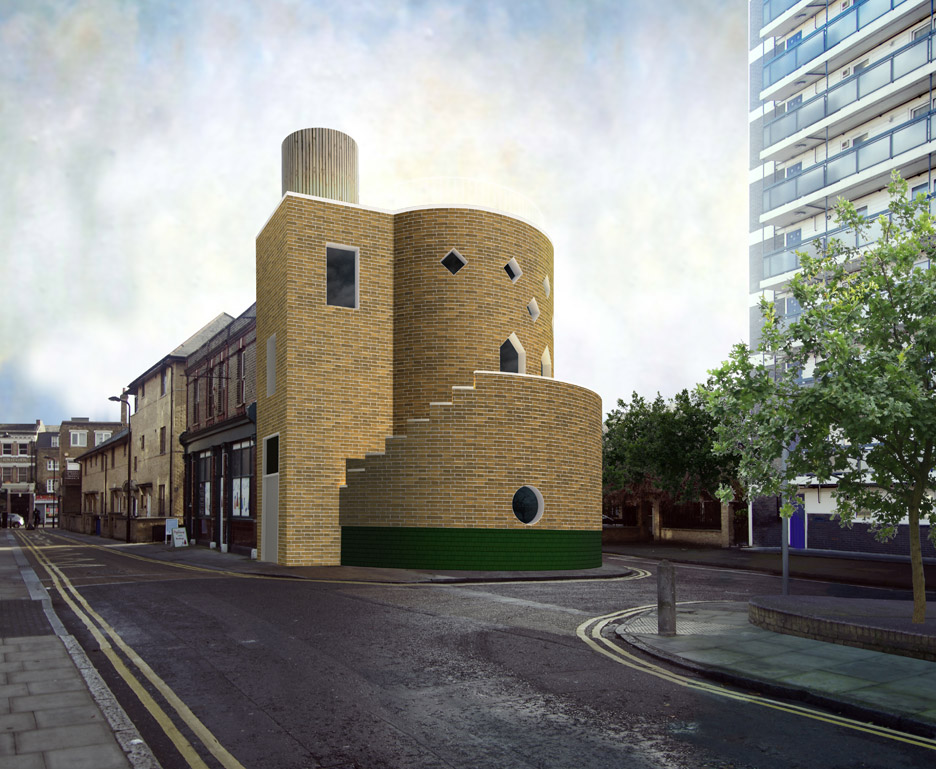 Architect Sam Jacob has unveiled plans to convert a former east-London pub into a home for himself and a nursery – with Postmodern touches including curving facades and assorted window shapes.

Sam Jacob Studio has now been granted planning permission for the four-storey property, which will continue to host the nursery that currently occupies its ground and basement levels.

London-based Jacob – a Dezeen columnist who was formerly a director of the now-defunct FAT  – will live in the upper floors of the building.

The design retains some of the original curving facades of the Victorian pub, which is located on Ivy Street in the Hoxton Street conservation area of Shoreditch.

But the building will now feature a stepped frontage, as well as a mixture of round, rectangular and angled windows. These playful additions are typical of Postmodernism, which celebrates ornamentation and experimentation.

“The project responds to its axial position and its curved prow to become a new urban object marking the gateway to Hoxton Street,” said Jacob. “The design’s starting point draws from the particular accidents and contradictions of the site. These are resolved in strong, expressive urban gestures.”

The site is framed by 10-storey 1970s housing blocks and a Victorian school, but was once adjoined by terrace housing that gives the building its unique combination of straight and curving facades.

“The design responds to the site’s fragmentary urban field, an island that is the last remaining piece of what was once a terraced street, long since demolished by either bombing or planners,” said the architect.

“The resulting site is a U-shaped plan, a line drawn into the urban plan at some moment that is a gesture far grander than the original building ever was,” he added.

“A tower acts as a vertical end to the pub facade, an exaggerated ghostly echo of the old terrace. From here, a curved wall follows the perimeter of the site to form a ground floor podium level with openings to the south side providing a new entrance and terrace for the community centre.”

This podium is accessed by a staircase – indicated by the stepped outline in the curved elevation – and forms the entrance to the residential levels of the scheme.

These curving elements, which are intended to be reminiscent of the water towers that define the skyline of American cities, will be repeated in a series of small timber-clad extensions.

A large double-height living space will be located behind the curved facade on the upper floors, forming the heart of the residence.

The Ivy Street Family Centre will continue to operate in the lower two floors, below the generous ceiling of the old pub, as well as in an extension with access to a south-facing terrace.

Jacobs formerly worked with architects Sean Griffiths and Charles Holland as FAT. The studio was known for its avant-garde, Postmodern-influenced design – a topic Holland wrote about for a Dezeen series – but disbanded in 2013 after 23 years.

During their time together, the trio designed a housing block in England where an assortment of building typologies appear to be stacked on top of one another and an exhibition dedicated to architectural copying for the Venice Architecture Biennale 2012.

Sam Jacob founded his architecture and design studio shortly after closing FAT. Projects completed since then include an urn for Lenin, which formed part of an exhibition at the Soane Museum, and a replica of a sarsen stone from the Avebury stone circle.