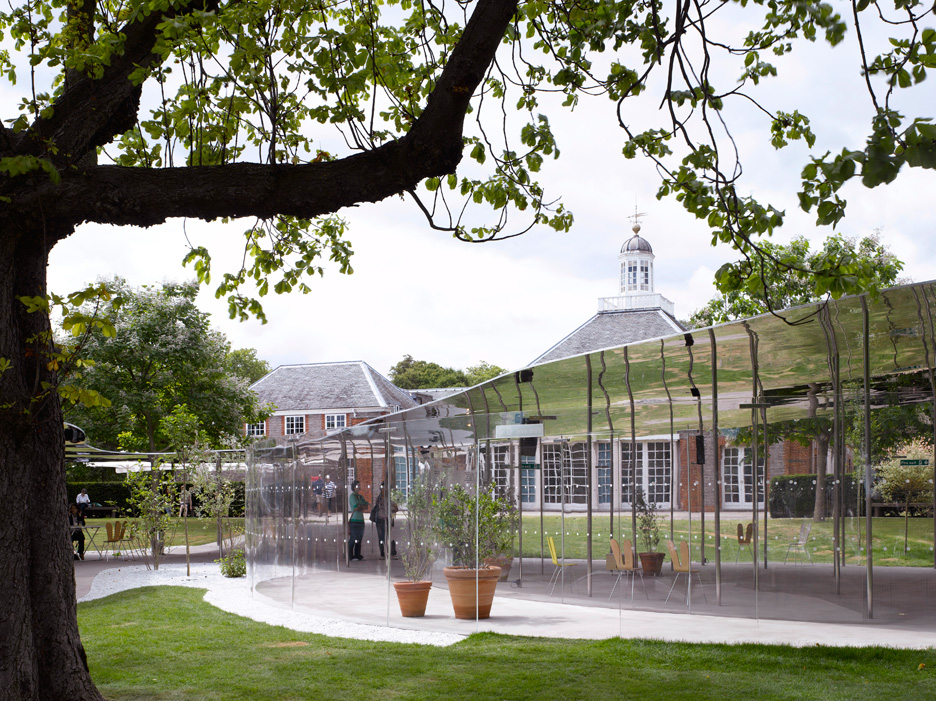 Sejima and Nishizawa’s pavilion in 2009 featured a canopy made from aluminium-faced plywood floating on hundreds of slender stainless steel columns.

“Their pavilion was so strange and gorgeous,” says Peyton-Jones in the movie. “They had this swooping canopy, which was something that was very important to them.”

The canopy, which was shaped to curve around trees on the site, was polished on both sides so that it reflected the park when viewed from below and the sky from above.

“I think what was so fascinating about the SANAA proposal was that it really embraced the parkland setting and this peculiar English weather we have throughout the summer,” Peyton-Jones says.

“When it rained, it was really gorgeous and when the sun shone it was also sublime. There was no perfect moment to see the pavilion.”

The sides of the pavilion were completely open, apart from a series of curved walls made of transparent acrylic, which created a semi-enclosed space under one section of the canopy to host the cafe and auditorium.

“It was very finely tuned, Peyton-Jones says. “It had a very light touch on the park.”

2009 was the second time the Serpentine Gallery commissioned a Japanese architecture practice, after Toyo Ito worked with engineer Cecil Balmond on the pavilion in 2002.

In 2013, the gallery appointed a third Japanese architect in Sou Fujimoto, who designed a cloud-like structure made up of a series of grids.

“We sort of began playing with the Japanese architectural dynasty,” Peyton-Jones says.

“There was Ito, of course, who is the grandfather. Sejima and Nishizawa are the parents. And more recently there is Sou Fujimoto, who is the kind of son.”