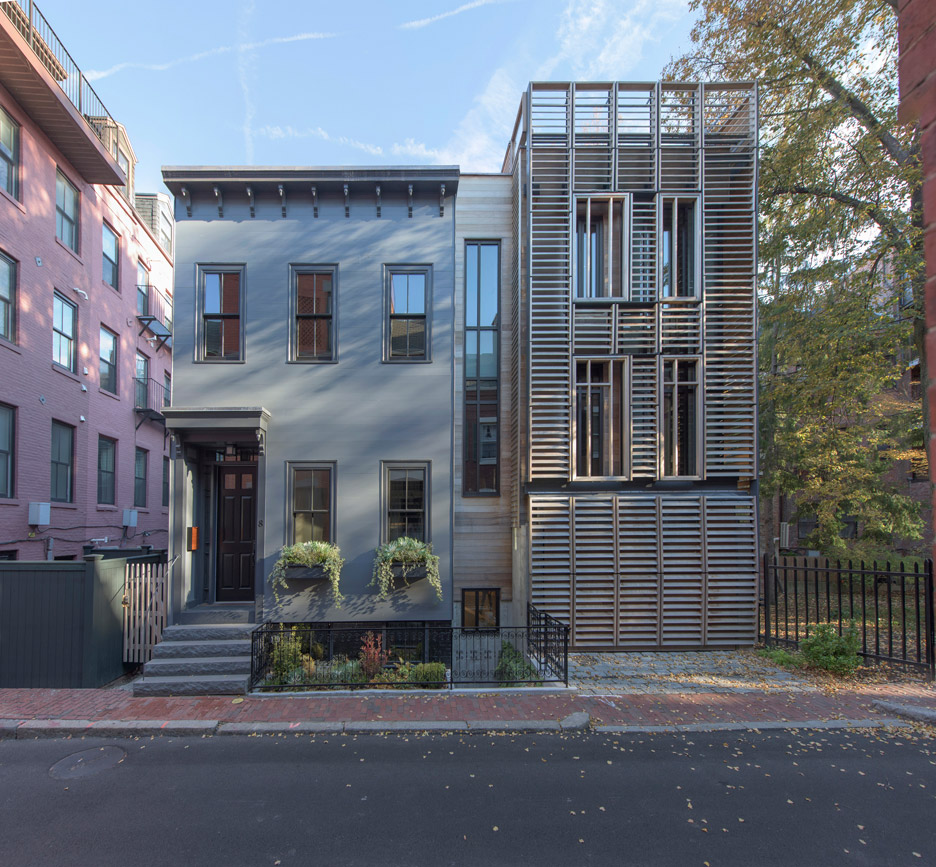 American studio SAS Designbuild has completed a family dwelling in a historic Boston neighbourhood that reads as two separate homes due to its unusual facade treatment.

Called Taylor Street House, the 4,200-square-foot (390-square-metre) dwelling is located in Boson’s South End neighbourhood, which is known for its Victorian architecture and numerous parks.

The urban home – built for a couple, both of whom are doctors – was conceived by SAS Designbuild, a studio cofounded by Scott Slarsky in 2011. He has since become a director at the national firm Shepley Bulfinch, which has an office in Boston.

The three-storey dwelling – which includes a garage slightly below grade – is situated on a small, quaint street lined with brick townhouses dating to the mid-19th century. One side of the home overlooks a pocket park.

When the project began, an original wooden home on the site, built in 1899, was largely demolished. “The facade was all that remained,” Slarsky told Dezeen.

The architect conceived a new, contemporary house for the site, but neighbours griped about the new plans, leading the architect to come up with an unusual solution.

Slarsky and his team, including associate Christopher Wortley, conceived a single home that would read as an “historic dwelling with a contemporary neighbour”.

For the historic portion, they created a wood facade that mimics the original home, complete with a Victorian-style door.

The home is adjoined by a modern volume clad in mahogany louvers, which are layered over a glass curtain wall. The shade screen provides privacy while also enabling natural light to enter the home.

The team inserted a skinny room with a tall window between the two volumes, which “signifies a symbolic separation between old and new”.

To further appease preservation-minded neighbours, Slarsky recessed the modern half of the home.

“The contemporary addition is set back from the facade of the original building by six feet (1.8 metres) to provide a sense of dignity and importance to the historic building,” he noted.

Inside, the addition features an open plan with exposed structural elements, such as black steel columns and beams.

The client insisted on keeping the interior raw and austere, meaning no varnish or paint was applied to wooden walls, floors and ceilings.

Visitors step into an entry and stair hall, which leads toward a living and dining area. The stairway is composed of wood and steel treads set between a concrete wall and black metal slats.

The upstairs contains a master bedroom, guest room and loft.

The home is filled with the owners’ eclectic decor, including mid-century modern chairs, colorful rugs, and contemporary artwork.

Other residential projects in New England include a rural house by Aamodt Plumb made up of old barns and a Cambridge dwelling by Anmahian Winton clad in pale wood and dark zinc.

Photography is by Peter Vanderwarker.