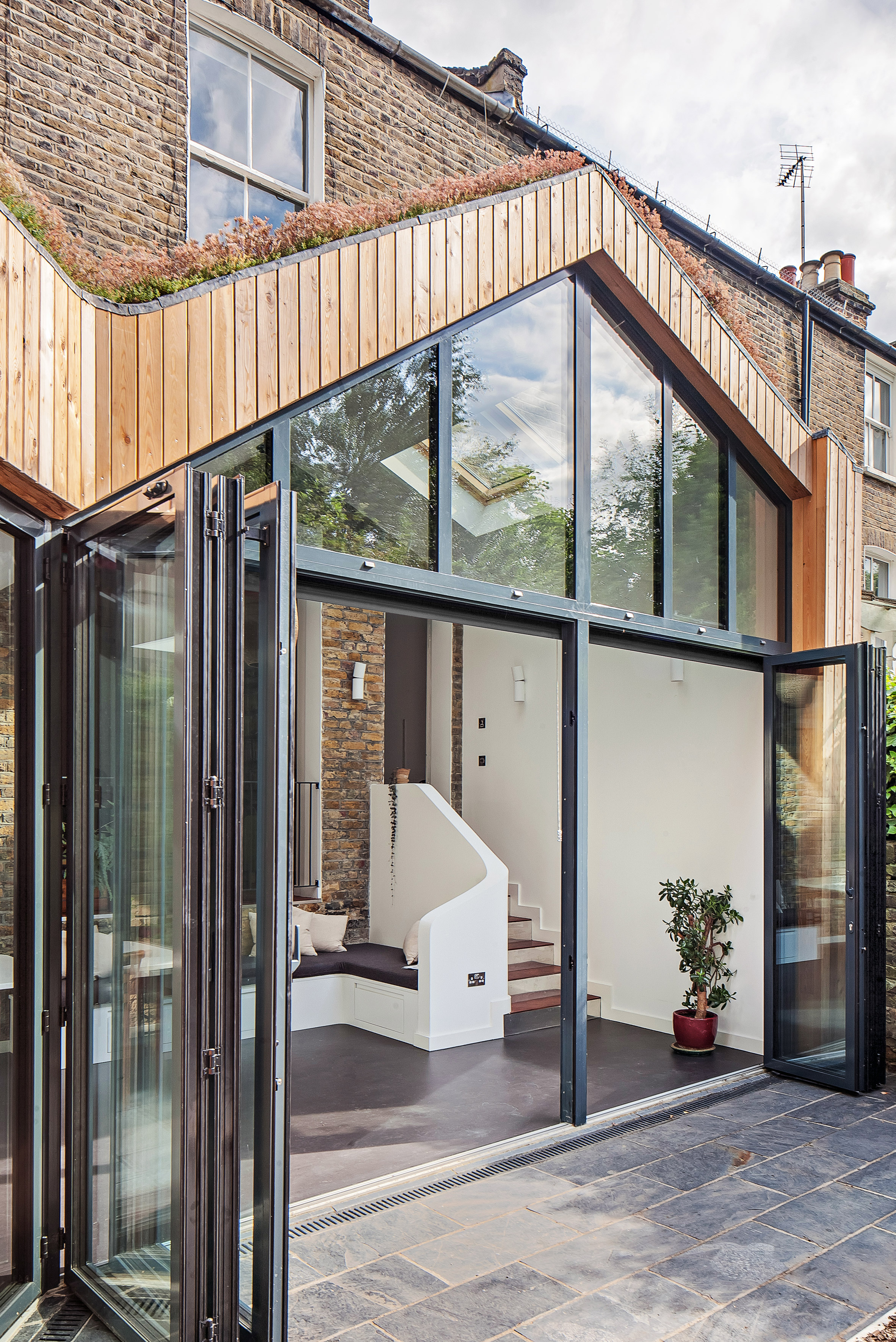 Scenario Architecture has added a wooden extension with a jagged heather-covered roof and a large window to the rear of an east London house.

The two-storey Evering Road apartment occupies the ground and basement floor of a Victorian house in a Hackney conservation area.

London-based Scenario Architecture was asked by the owners, a couple who had lived in the property for over a decade, to improve the natural lighting within while making as few changes to the existing building as possible.

The original brick rear facade was maintained, while an existing conservatory that blocked light into the ground floor lounge behind it was demolished.

The architects replaced it with the extension, which has an unusual shape created by following the openings in the existing rear facade.

The irregularly pitched roof above one half includes tall openings for the new living and dining room. The architects added black railings to the original openings, creating balconies overlooking the new space from the living room, which was left unaltered.

“In order to keep and respect the original structure and features as much as possible, the original back facade openings were kept, creating an internal balcony overlooking the dining area and garden beyond it,” said the architects.

“The living room with its original features was left as existing keeping a cosy and more traditional space.”

Large expanses of glazing follow the gable shape to allow for plenty of light inside, as well as forming concertina doors that open to the back garden.

“The new back facade is extensively glazed allowing for both unobstructed views to the redesigned rear garden and for light to penetrate all the way to the interior of the flat,” explained the architects.

On the other half of the extension the roofline flattens so as not to block light to an upper level window, while the facade bridges outwards to include the new kitchen area.

The architects chose to cover the walls of the structure in Scottish larch panelling and top its roof with a layer of heather.

“Using Scottish larch cladding creates integration with the natural environment of the rear garden, gives a warm and pleasant view from the neighbouring properties, and allows for an unusually shaped volume following the curves of the design to reflect all the interior design actions,” said the architects.

A pair of skylights top steps that leads through one of the original openings from the kitchen and garden level to the lounge. A white handrail curves round to form a bench that overlooks the garden.

Another, larger skylight sits above the kitchen, which features white kitchen cabinets and a green splashback. Contemporary finishes inside the extension include white-painted ceiling and walls, and grey flooring. The wooden dining table is topped by a white counter.

Architect couple Ran Ankory and Maya Carni founded Scenario Architecture in 2007 after meeting while studying at London’s Architectural Association School of Architecture. The pair recently added a glass-roofed extension to their own London home.

Other projects by the studio include a blackened timber extension incorporating a walkway for cats, and a home with a sunken roof terrace that can be seen from the living room.

Photography is by Matt Clayton.