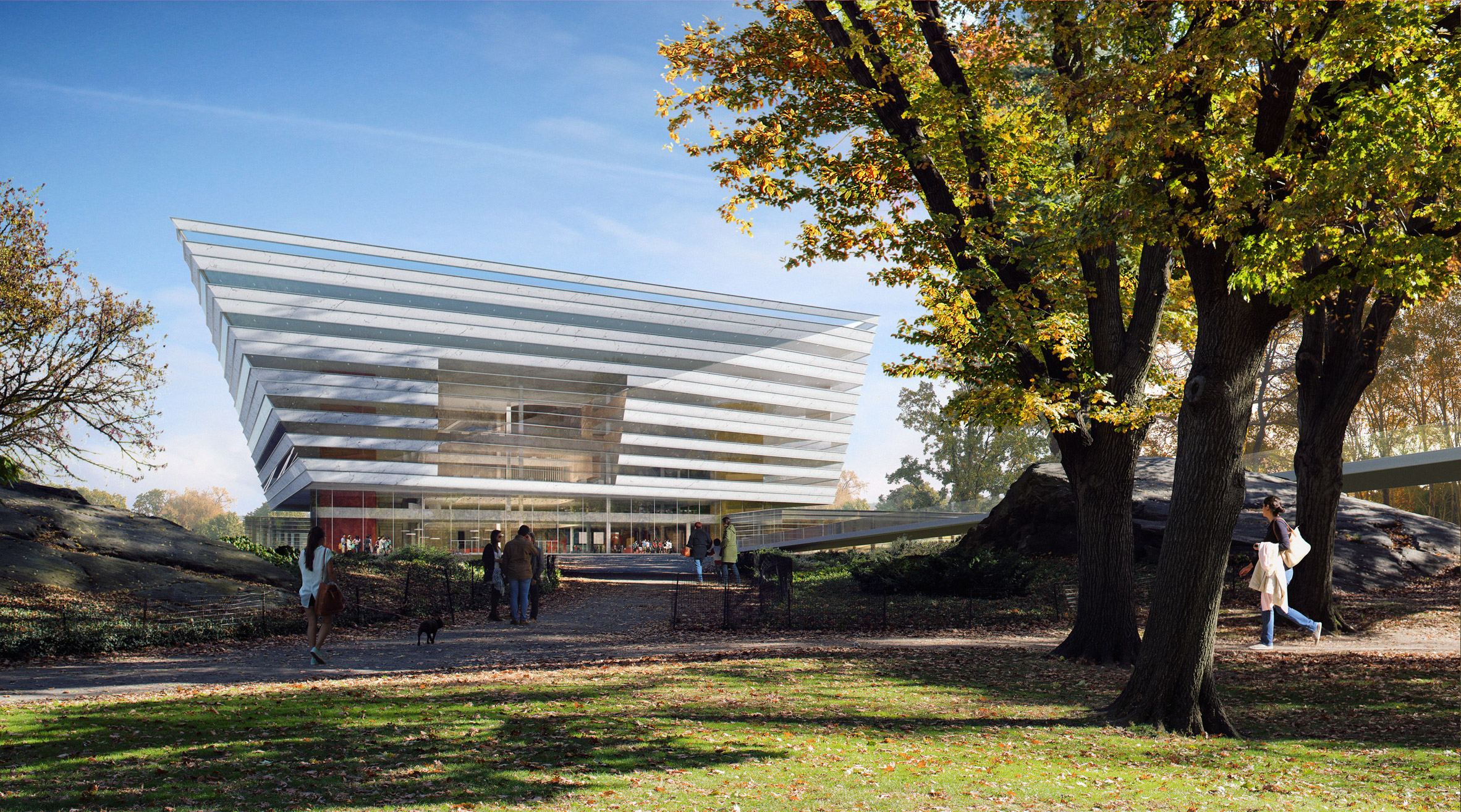 Alternating strips of glazing and floor plate give the building, which broadens towards the top, a slatted appearance. The angled windows will frame views into the adjacent Century Park in the city’s Pudong District.

The main library volume floats above two pavilions that will house a 1200-seat performance venue, exhibition and events space and a dedicated children’s library. They will all open up towards a series of landscaped courtyards and gardens.

“We see the library as the focal point in a park, a central rock within a city-scale Chinese garden,” said Schmidt Hammer Lassen partner Chris Hardie.

“One of the most compelling things about this project is its location within a parkland setting. You are in the heart of the world’s largest city, yet we have the opportunity to create a sanctuary for knowledge and media in the trees.”

The library will join the Science and Technology Museum and the Shanghai Oriental Arts Centre on Century Avenue, which connects Century Park to the city’s business district.

The library, which will also house the Shanghai Institute of Scientific and Technological Information, will be arranged around a generous atrium with three staggered reading rooms. Batons of timber will line the column-mounted platforms, offsetting the otherwise sparse white decor.

Bands of transparent fritted glass that wrap the facade will frame vistas over the surrounding park and of the city’s skyline for readers.

“A modern library is not only a place for the storage and lending of different materials, it is also a place to stay, a place for social interaction and a place to be inspired and surprised,” said Schmidt Hammer Lassen partner Morten Schmidt.

“The answer to these changes and challenges are what we refer to as a shift from collection to connection,” he added. “Libraries are not only passive collections, but vibrant institutions connecting users with knowledge, experiences, innovation and not least their fellow citizens.”

Shanghai Library, which is expected to open in 2020, is the latest design from library specialists Schmidt Hammer Lassen. Others by the firm include a library in Edmonton, Canada, with a metallic facade and large windows to draw visitors inside and another in Aarhus, Denmark, which claims to be the largest in all of Scandinavia.

Plans are also in the works for a library in Christchurch, New Zealand, to replace the building left wrecked after the 2010 and 2011 earthquakes.