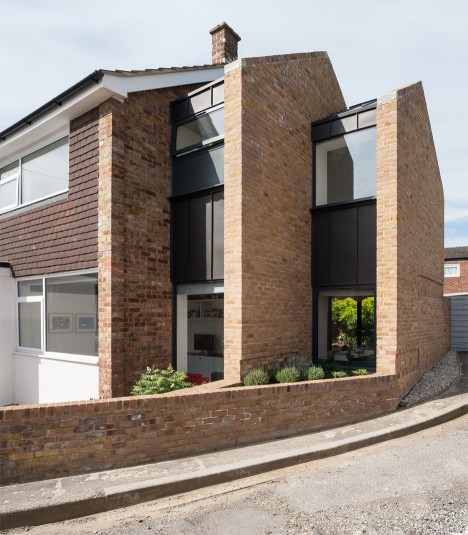 Architecture studio Selencky Parsons has extended a typical midcentury end-of-terrace house in southeast London by adding a pair of brick gables that diminish in size like Russian dolls (+ slideshow).

The property is typical of local authority housing built across the capital in the postwar period. Its current owners invited Selencky Parsons to propose a renovation and extension intended to create more space for their growing family.

“We shared with the client a desire to celebrate what is an often unloved housing typology and transform it into something special, whilst retaining the essence of the original building,” architect Sam Selencky told Dezeen.

“For us, it was also an exciting chance to work with a typology we hadn’t worked with before.”

The house’s position at the end of a row of terraced properties meant there was a possibility to extend from the side into part of the existing garden.

The architects chose to create two offset brick walls that echo the proportions of the existing gable but decrease in size as they extend towards the road – like sections of a telescope, or Russian dolls.

“The area to the side of the house was an awkward shape, which meant building a simple square extension was not possible,” Selencky explained.

“We explored a range of options and settled on this approach as it offered a solution that utilised the space in an efficient way, whilst maintaining a coherent design.”

“Stepping back the walls and reducing the height of them made the extension subservient to the terrace, which we felt was important,” he added.

“For the existing house, the walls were repaired and insulated but the external aesthetic was kept to maintain the integrity of the terrace.”

Infilled sections between the brick gables are clad in black zinc that continues over the roofs and is interrupted only by windows positioned to extend the rhythm of the existing terrace’s fenestration.

At the front of the house, the new brickwork extends to meet the low boundary wall. At the rear, the wall wraps around at first-floor level to shelter the garden.

“The side elevation is kept deliberately calm and restrained with no fenestration, in keeping with the current gable end,” the architects claimed.

“It is articulated only by recessed courses of bricks, which mark the junctions of the boundary walls with the gable walls.”

The simple brick surface of the gable wall is left exposed to provide a feature inside the new living space on the ground floor. This open-plan room is separated by the staggered walls into areas designated for cooking, dining and relaxing.

“We were keen to improve the flow of the house and create a sequence of defined spaces within the open-plan layout,” Selencky pointed out.

“We also wanted to improve the entrance to the house. To that end we opened up a vista through the house into the garden from the front door, and created a separate entrance space.”

A large opening next to the dining area leads out onto the garden at the rear and enables light and views to extend through the house.

An additional bedroom and bathroom accommodated on the first floor extend into the new roof space to enhance their sense of volume.

The gabled brick terrace is a common sight around the UK.

Other recent refurbishments of this property type include a house with glazed tiles added to its facade, and a building that was extended to accommodate a small home office.

Photography is by Andy Matthews.