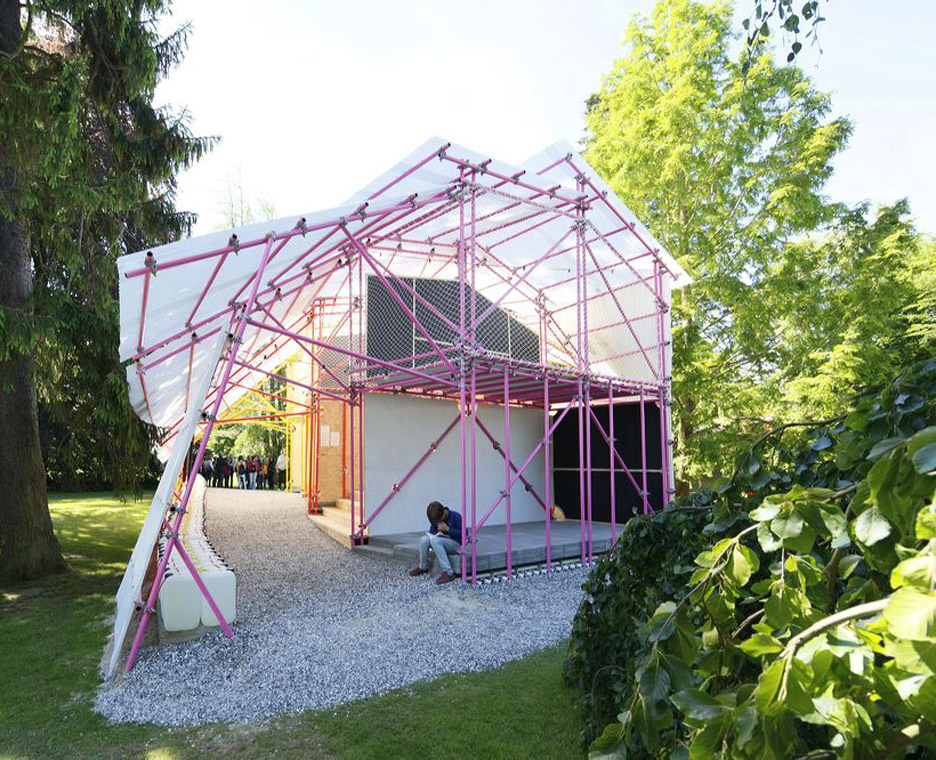 A pavilion designed by architects SelgasCano for a Copenhagen art museum is being transported to a Nairobi slum, where it will serve as a school for 600 pupils (+ slideshow).

The Louisiana Hamlet Pavilion has been packed in shipping containers and is on its way to Kibera, the largest urban slum in Africa, where it will be reassembled to replace a dilapidated school made of scavenged corrugated iron and timber.

The museum commissioned the pavilion while Second Home is paying for its shipping and reconstruction in Kibera, Nairobi – a sprawling 2.5 square kilometre shanty town that is home to an estimated one million people. Around three quarters of the slum’s inhabitants are thought to be under the age of 18.

The project came about when Baan visited the Kibera Hamlets School, which provides children with an education despite having no drainage, toilets, electricity or adequate roof to keep out the frequent rain. The school is surrounded by piles of garbage and has an open sewage running alongside its classrooms.

“Iwan Baan went on an assignment to Kibera and became really engaged in the place,” said Second Home co-founder Rohan Silva. “He’s also close friends with SelgasCano and took them there on a trip.”

SelgasCano then persuaded the Louisiana museum, which had approached them to create a summer pavilion for its garden in Copenhagen, to design something that could be shipped to Kenya afterwards.

“We visited Kibera, which is the biggest slum in Africa,” Jose Selgas told Dezeen. “Iwan has a big relation with all these slums. He has visited and photographed a lot of them. He’s helping in the whole process, being part of the whole thing.”

“Through Iwan we were in touch with a local architect and we visited the Kibera Hamlets School,” Selgas added. “That visit impacted us absolutely so we committed to help them improve the school.”

The school was founded in 2004 by local youths, starting out as a football club to keep children off the streets and growing into a community-run school funded by donations.

It opened in the same week as the firm’s Serpentine Gallery Pavilion in London and closed on 25 October. It has now been dismantled and is in transit to Kenya.

The new school, which cost around £25,000, is made of cheap but durable materials including chipboard, polycarbonate plastic and standard scaffolding components.

The 150-square-metre building will feature a dozen classrooms for nursery, primary and secondary pupils, plus new offices, toilets and a cooking area.

The classrooms are stacked two high with the two levels connected by a broad wooden staircase that can double as auditorium seating.

The classrooms, offices and toilets are housed in hut-like structures clustered beneath an arching canopy of yellow-painted scaffolding clad in translucent polycarbonate.

Rows of standard plastic containers filled with water are used both to anchor the structure to the ground and to provide bench seating around the school’s perimeter.

Second Home has a close relationship with SelgasCano. In 2014 the Spanish architects completed the company’s first shared workplace in east London and have more recently designed a bookshop, which is due to open later this month across the road from Second Home’s premises in Hanbury Street.

In addition Second Home has bought the architects’ 2015 Serpentine Gallery Pavilion and plans to ship it to Los Angeles, where it will serve as a temporary networking and events space while the organization finalises plans for a permanent outpost in the California city.

“It’s a project our architects are passionate about and they’ve got us passionate about it,” added Silva. “If we believe that design can have an impact on the world around us, that has to apply as much in London, Los Angeles or Lisbon [where Second Home is also opening a branch].”

He added: “We want the school to be used as an entrepreneurial hub in the evenings.”

Selgas said he did not see the project as a humanitarian initiative.

“I don’t really want to appear like a humanitarian guy,” he said. “I don’t want to do it. And that’s it. So we don’t want any recognition on this, we just want the school. So, we prefer not to mention that kind of thing. We don’t give a shit about that.”

He added: “We want to do it because we know that it’s good. In the end it’s very easy to do this thing; it’s very cheap for us. £25,000 is nothing. And you are changing the lives of 600 kids. At night it will light up like a lighthouse and it’s going to change a little bit the mentality of the kids who go there.”

The post SelgasCano’s Louisiana Pavilion to be reused as a school in Kenya’s Kibera slum appeared first on Dezeen.