Serpentine Summer Houses put up for sale on The Modern House 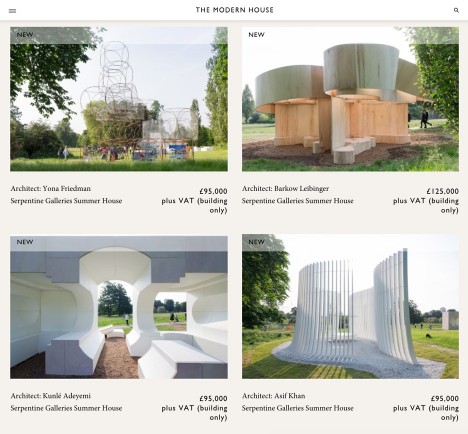 The four Summer Houses built to accompany BIG’s Serpentine Gallery Pavilion have been listed for sale through architecture-led estate agent The Modern House.

They are now all available to buy through The Modern House. Barkow Leibinger’s curving timber Summer House is listed on the website at £125,000, while the other three are priced at £95,000.

Now in its 16th year, the Serpentine Gallery Pavilion is usually sold privately – a buyer is often found even before construction work has started.

But this is the first time in years a structure has been openly sold through an agency.

The Modern House, which specialises in selling architect-designed Modernist buildings, is facilitating the sales on a pro-bono basis, with support from fellow UK estate agent Knight Frank.

A spokesperson for the Serpentine Galleries told Dezeen the proceeds are instrumental in funding the project.

But she said the outcome of the sales will not influence the decision whether to commission more summer houses next year.

“The Serpentine does not charge admission and must raise funds to realise the pavilion and summer houses through sponsorship, help-in-kind support and the sale of the structures,” she told Dezeen.

Dezeen understands that Bjarke Ingels’ Serpentine Pavilion – an “unzipped wall” of hollow fibreglass bricks – has already been sold to Westbank.

The Canadian developer plans to dismantle the modular pavilion and reassemble it in various locations abroad.

“The pavilion has a temporary footprint here in the park, and then it’s going to travel to Asia and America,” Ingels told Dezeen in a video interview.

Last year’s pavilion, designed by Spanish duo SelgasCano, was bought by workplace startup Second Home and is set to reopen in Los Angeles, while the 2014 pavilion by Chilean architect Smiljan Radić was sold to the Hauser & Wirth gallery in Somerset.

The post Serpentine Summer Houses put up for sale on The Modern House appeared first on Dezeen.