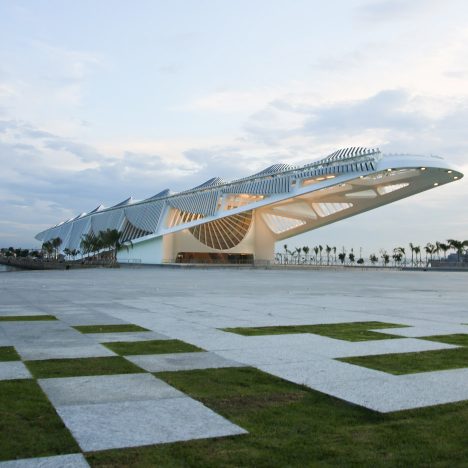 Rio 2016: sporting venues aren’t the only projects to have completed in Rio de Janeiro in the run up to this month’s Olympic games. Here are seven impressive cultural buildings, offices and retail spaces that have opened since the city won its bid to host the event (+ slideshow).

Museum of Tomorrow by Santiago Calatrava

Spanish architect Santiago Calatrava’s science museum with a skeletal roof that projects over a public plaza opened in 2015. Find out more about the Museum of Tomorrow »

Books are arranged by colour rather than by title on the upper shelves of this bookshop in Rio de Janeiro designed by São Paulo firm Studio Arthur Casas. Find out more about the Saraiva bookshop »

These images by photographers Hufton + Crow reveal the pairing of angular and curved concrete volumes at the art and music complex completed by French architect Christian de Portzamparc. Find out more about Cidade das Artes »

French-Brazilian studio Triptyque has revamped a 85-metre-high office block in Rio de Janeiro with zigzagging glazing and solar panels so it can generate its own electricity. Find out more about the RB12 overhaul »

Brazilian architecture firm Studio MK27 has added a wooden lattice to the front of this Rio de Janeiro lighting shop – filtering natural light during the day and creating a glowing facade at night. Find out more about the Lumini showroom »

The post Seven of the best new buildings and interiors in Rio that have nothing to do with sports appeared first on Dezeen.