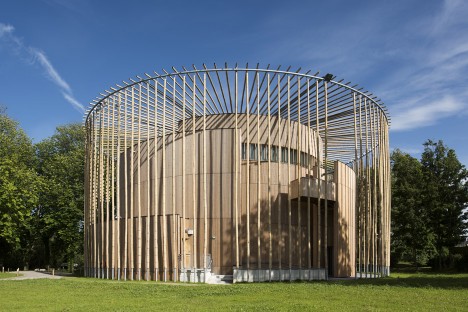 Towering bamboo poles encase this cylindrical wooden theatre in France, which opened in a fanfare last week, despite suffering vandalism just a few days before (+ slideshow).

Described by the architects as an “incarnation of Franco-British understanding”, the building mimics the design of the Globe Theatre – a round playhouse associated with William Shakespeare that features tiered seating and a standing pit.

To complement the surroundings, the architects chose to build the structure entirely from wood and bamboo.

“It’s designed to vibrate with its natural surroundings rather than be a stand-alone, attention-seeking, alien object,” said studio founder Andrew Todd.

Twelve-metre-high bamboo poles encases the main structure to create a cage-like exterior, with a pathway slotted in behind.

At the centre, a cylinder clad in larch houses a two-storey auditorium that seats 388 people, while shorter, curved sections are staggered around it.

In the spaces between the two walls, the architects located the entrance hall – topped by glazed roofing – as well as the main staircase, which wraps the central core and provides access to the seating.

Related story: Architects embrace “the beginning of the timber age”

It is the first structure in the world made entirely of unfinished curved CLT panels, according to the team, and was assembled in seven weeks.

Inside, the wooden structure is revealed, and complemented by the supporting oak columns and flooring.

Seating is located on three levels surrounding the edge of the drum, and is fronted by a wooden balustrade and a steel handrail.

Like the Globe, an open stage extends into the audience on three sides, aiming is to create greater intimacy between performers and the audience.

Instead of a standing pit, Todd added further seating, which are also wooden.

A chimney at the top features opening windows so that the theatre can be naturally ventilated, while a strip of glazing wraps the top of the structure to provide plenty of natural light.

“The circular, wooden auditorium is naturally lit and ventilated, the building’s crown acting as a giant chimney to create a gentle current of air for the audience,” said the architects.

“It is possible to put on a show in this building literally with nothing, using only natural light and natural ventilation and the breath of the surrounding forest.”

The theatre opened to the public with a performance on Friday 24 June – that same day that the UK announced the result of its referendum on the European Union, with more voters choosing to leave.

The theatre was unexpectedly vandalised with orange graffiti a week before – an act the architect believes was “politically motivated desecration” by members of the far right.

Todd released a statement describing the event as “a well-organised, adult, carefully executed stunt relaying through violence the messages expressed already in the political sphere by the extreme right”.

The Chateau d’Hardelot near Calais and its surroundings are the home of the Centre Culturel de l’Entente Cordial, which is dedicated to strengthening cultural ties between France and Britain through exhibitions, conferences, theatre and music.

The building will provide a permanent venue for the cultural centre’s annual Midsummer Festival. It can also be used as a small opera house with an orchestra pit and proscenium.

Studio Andrew Todd was founded by Todd in 2004, after a spell working for French architect Jean Nouvel. The firm has completed several theatre projects, including one on the banks of the Seine and one that makes use of recycled paper bales.

Photography is by Martin Argyroglo.