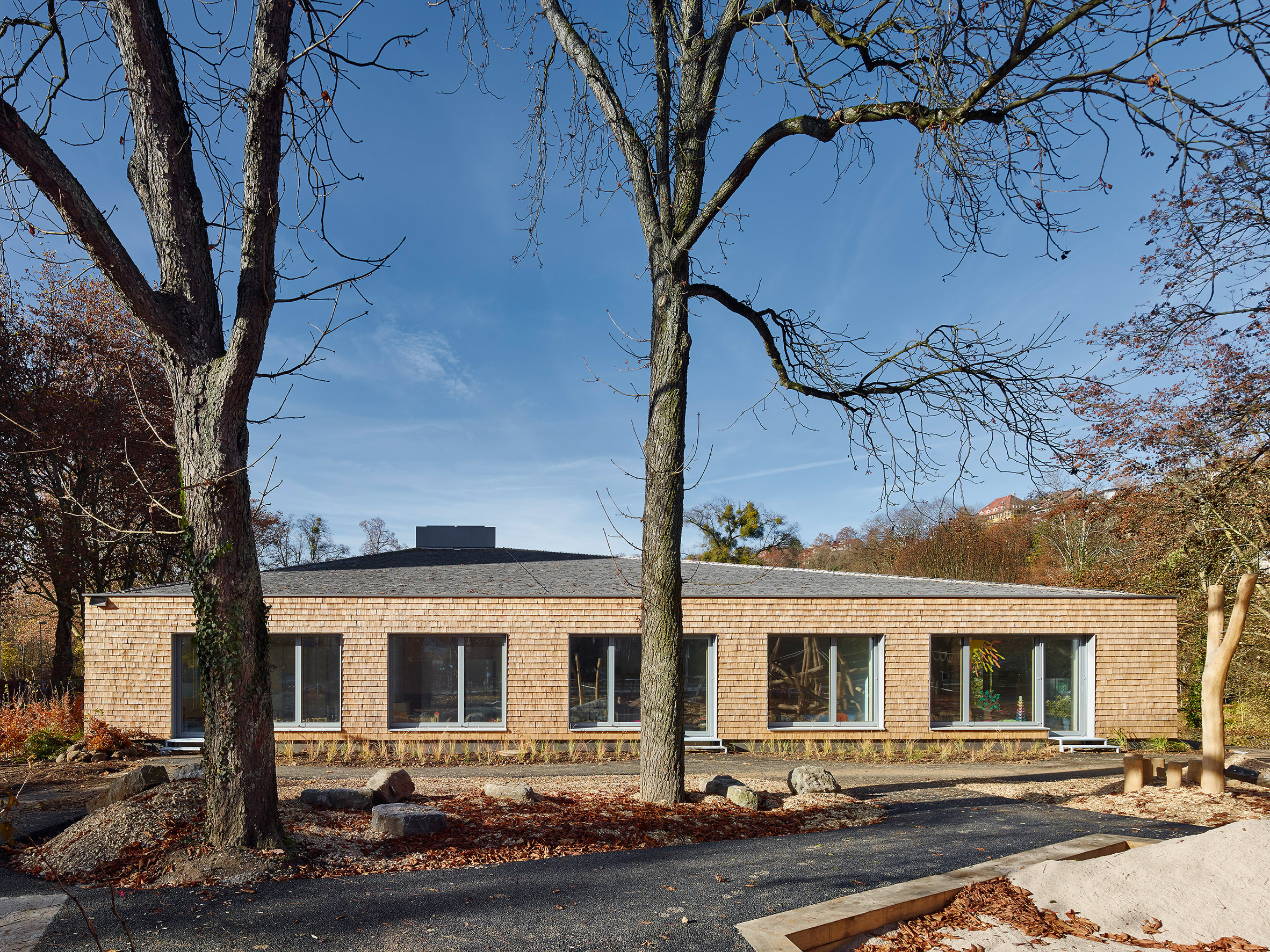 Stuttgart studio (Se)arch Architekten has completed a school and daycare centre in the German town of Tübingen, featuring cedar-shingled facades and a cobbled entrance courtyard.

The education centre is situated in a wooded area on the banks of the Neckar river, from which the town’s castle and old town are visible across the water. It comprises a nursery and a primary school providing after-school care.

(Se)arch Architekten referenced the scattered arrangement of existing buildings adjacent to the site when developing the pair of freestanding but interconnected structures, which are positioned on either side of the courtyard.

The single-storey nursery and two-storey primary school both feature square plans and pyramidal roofs with offset apexes that lend them a faceted gem-like quality.

“The two pavilion-like solitaires create a high permeability in the outer space due to their open arrangement,” said the architects. “The result is a school landscape through which the important paths and perspectives are preserved as far as possible.”

By separating the facility into two distinct units, the architects aimed to produce structures with a scale that is appropriate for children.

The cedar shingles used to clad the entire exterior of the nursery building and the upper storey of the school add a texture that references the natural setting and will weather to a silvery hue to complement the metal and concrete used elsewhere.

Between the two pavilions housing the school and daycare centre, a cobbled square surrounded by a concrete canopy helps guide children and visitors towards the entrances on either side.

The square canopy is supported by slender metal poles and provides sheltered circulation with integrated lighting around the edges of the outdoor space.

The entrance to the nursery leads to a multipurpose space containing coat hooks and storage, which is illuminated from above by the square skylight.

An office is positioned to one side of the entrance space, while the three main rooms towards the rear of the building all look out onto a play area incorporated among the trees.

The primary school’s entrance leads into an open ground floor containing a multifunctional space, a cafeteria and a library.

These areas are intended to offer places for meetings and interaction, with the more intimate classrooms located on the upper floor.

At the heart of the building is a circulation space featuring a stepped concrete plinth connected to a set of concrete-lined stairs that ascends to a bright, open landing.

The skylight at the peak of this building’s roof funnels natural light down through the central aperture to the levels below.

The architects also used cedar shingles to clad the exterior of a gabled house with its own gallery space in Stuttgart and a stepped residence in the city of Aalen, which features a concrete base level and two rooftop courtyards.

Photography is by Zooey Braun.

The post Shingle-clad school by (Se)arch Architekten is set around a cobbled courtyard appeared first on Dezeen.