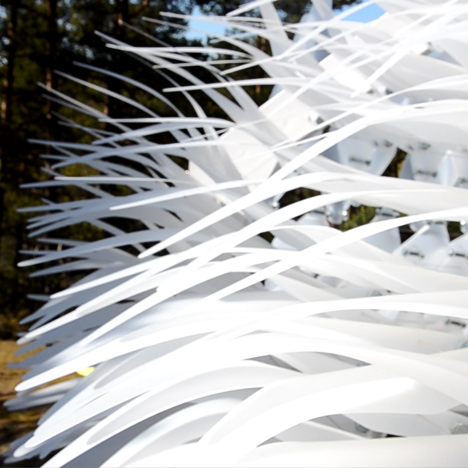 London studio NEON has built a structure with shingles that “shiver” and adapt in response to changing weather as part of a exhibition in Finland (+ movie).

The Shiver House was created for this summer’s Barfotastigen exhibition – an annual outdoor exhibition focusing on environmental and site-specific art that is taking place in Korppoo, in the Turku archipelago of southern Finland.

“The project was initially inspired by the graduated and cohesive movement that you get in underwater landscapes,” explained NEON director Mark Nixon.

“We felt that this kind of movement could be applied to architecture to create deeper connections between people and buildings.”

Based on wooden Finnish huts, locally known as Mokki, the skeleton of Shiver House is a simple four-sided timber frame.

Approximately 600 counter-weighted shingles made from folded polypropylene sheets are mounted on rows of tensioned steel wire, forming the outer-shell of the structure.

“The actual shingle element was developed as an outcome of an interest in kinetic sculpture, which often uses counter-weighting on larger forms to create movement without electrical power,” said Nixon.

When the weather is still, the plastic shingles lie flat and allow a view of the surrounding landscape.

Wind, rain and snow cause the shingles to flick up and rotate into a closed position, creating a protective skin of over the structure so it can function as a shelter.

“The nut and bolt counterweight causes the shingle to have an almost weightless quality as well as making it rest in exactly the same position every time there are no forces acting upon it,” he explained.

“The shingle’s form makes it conducive to catching the wind, which causes it to rotate, closing up the form,” he continued.

NEON was established by Nixon and partner George King in 2012. The installation is part of the studio’s ongoing research into how architecture can create a closer emotional link between its inhabitants and the natural world.

It will remain in place for the duration of the Barfotastigen festival, which continues until 30 September 2015.

German architects Frank Barkow and Regine Leibinger also experimented with the concept of moving architecture for the 2014 Venice Architecture Biennale, creating a shape-shifting that appeared to breathe in and out.