Six examples of fabric-cast concrete that are breaking the mould 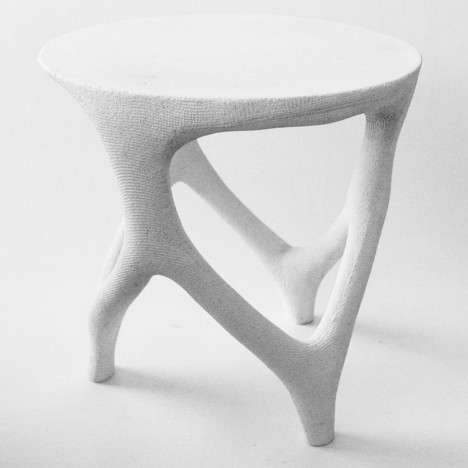 Pouring concrete into fabric moulds allows designers to create dramatic, sculptural shapes that could soon be used for architectural structures. We’ve selected six of the most interesting examples, including a new casting technique using robots.

The fabric casting of concrete involves pouring cement into a textile mould, usually held in shape by a wooden frame.

The technique was pioneered by the likes of the University of Manitoba’s Centre for Architectural Structures and Technology (CAST) and 20th century Swiss engineer Heinz Isler, who used it as part of his work developing super-thin concrete building shells.

But recently, designers have been experimenting with it again to create unique sculptural furniture as well as exploring its potential for creating new kinds of architectural components, introducing robots and different fabrics into the casting process.

“This casting method has implications at various scales in the construction site of the future,” designer Joseph Sarafian told Dezeen. “We see it being scaled up to create unique building facade elements or even the primary structure of a building.”

Here are some stand-out examples of the technique we’ve seen at Dezeen:

Called Mass IIII, the table was created by stitching the fabric into a net and stapling it to a circular board. This was hung upside-down and filled with cement and gravel, weighted, then drenched in water and left to harden.

The resulting shape was sanded back before cork feet were added to make a functional side table or stool. Read more about Mass IIII »

Augmented Skin by students from the Bartlett School of Architecture

Once the sticks have been positioned inside the fabric to form joints, concrete is poured in to create a solid connecting form without the need for a supporting framework. The sticks remain inside the mould, reinforcing the structure.

Called Augmented Skin, the projected involved creating a few small prototype objects, like a chair, using the technique. The students also developed several visualisations of the sorts of architectural structures that could one day be created, including pavilions and bridges. Read more about Augmented Skin »

By using robots, the designers do not have to constantly create and destroy the plywood framework that is usually built to hold a fabric mould in place. They told Dezeen this could be the construction technique of the future.

“Parametric design is increasing the need for variation, much of which goes unbuilt because of traditional construction methods’ failure to adapt to new digital technologies,” Sarafian said.

Most of the recent experimentation with fabric-cast concrete has created intricate web-like forms. But Japanese studio Schemata Architecture Office cast concrete in a fabric bag to create this chunky counter for a confectionary kiosk in Tokyo.

The concrete counter folds around the kiosk and displays the rounded edges and creases of its fabric mould. “We made the concrete with an uncommon method, but it was not easy,” Nagasaka told Dezeen. “The concrete pressure is very heavy, but we found a hard enough textile finally.” Read more about Papabubble »

A team of students from the University of Michigan created FattyShell (v.01) as part of their studies into digital fabrication and algorithmic design.

They stitched together sheets of rubber to create a membrane, which was supported by plywood discs to help control the shape of the concrete once poured in. The rubber casing was also tensioned at certain parts with cables.

The cement-based concrete was then poured between the sheets at three hourly intervals. Read more about FattyShell (v.01) »

An alternative to casting concrete in fabric is to use fabric that is actually impregnated with concrete. This achieves a different aesthetic and has not yet been used to create load-bearing building structures.

Industrial design graduate Florian Schmid made these stools from a material called Concrete Canvas, which consists of cement layered between fabric and a PVC backing. Once soaked it can be manipulated for a few hours before hardening.

Schmid folded pieces of the canvas and stitched the edges together with brightly coloured thread, then supported it on a wooden mould while it was drenched in water and allowed to harden. Read more about Stitching Concrete »

The post Six examples of fabric-cast concrete that are breaking the mould appeared first on Dezeen.