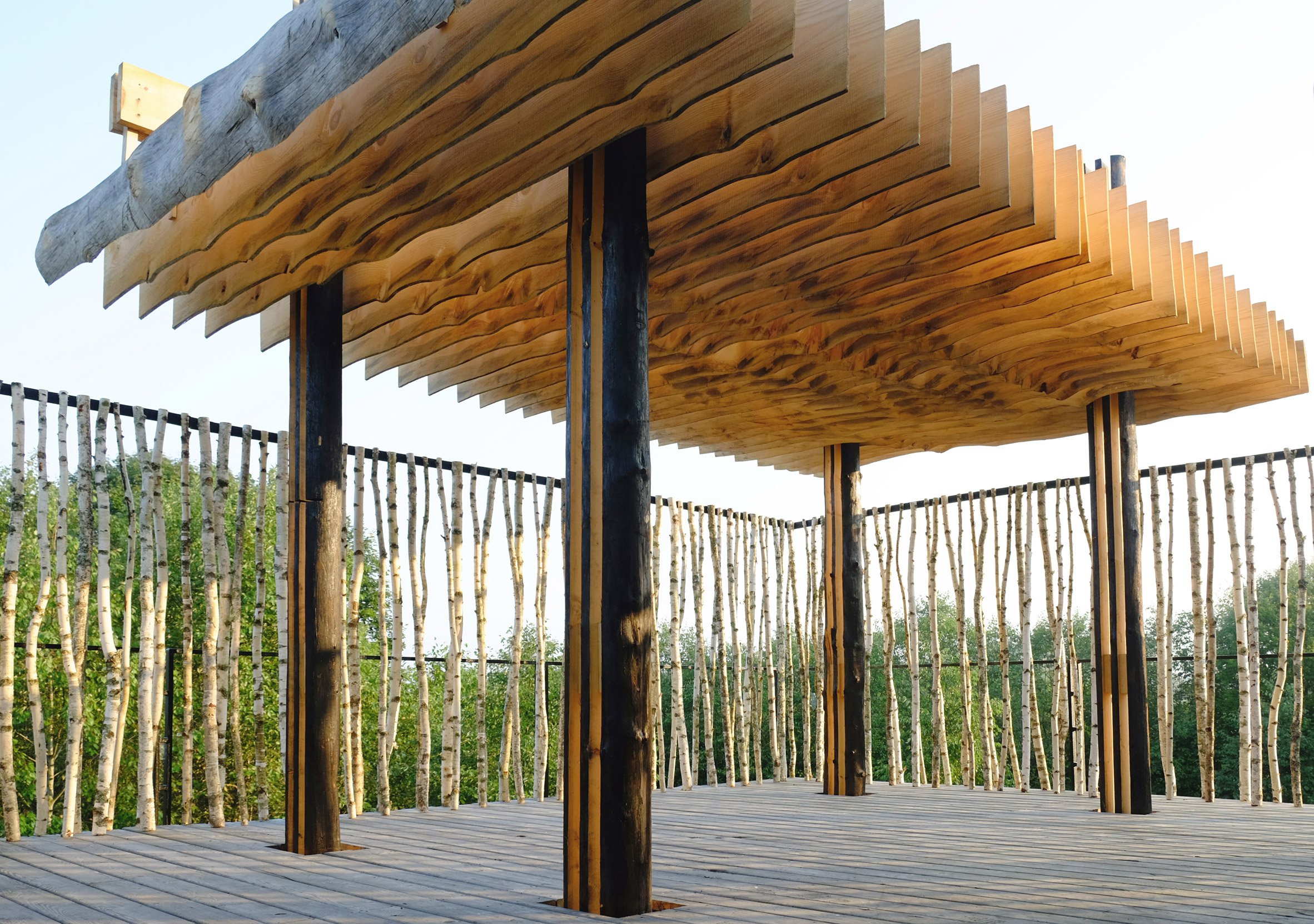 A huge tree trunk has been sliced into sections to create the slatted roof of this outdoor classroom designed by architecture students for a school at an art park in Russia‘s Kaluga region.

The semi-outdoor classroom is affixed to an existing school building set within Nikola-Lenivets, an art park in a village around four hours from Moscow that currently plays host to 28 permanent works.

Acting as the parkland’s base for learning, the school will hold courses in architecture, curation and sustainability, as well as forestry and cooking.

The project is a collaboration between the park and Global Practice Unit at England’s University of Brighton, which is led by the school’s head of architecture, Robert Mull. Architect Xenia Adjoubei and designer Thomas Randall-Page also oversaw the project.

Thirteen international students and community craftspeople helped to design and build the school’s outdoor classroom, which is titled Sliced White after its segmented roof.

The roof is composed of 29 cuts of timber and is bookended by two “crusts” of exposed bark. The bark is also left intact on the edges of the central segments, highlighting the undulations of the trunk’s surface.

To create the roof, students sourced a large log from the village near to Nikola-Lenivets and ran it through an on-site sawmill that belongs to Nikolay Polissky, the park’s founder.

Without a top cover, the thin slats of the roof leave students exposed to the outdoors while offering shade from the harsh sun of Russian summers.

“We were inspired and moved by Russian vernacular architecture, local materials, no waste, and forms deeply rooted in local myths and storytelling,” Mull told Dezeen.

“Nikolay Polissky’s sawmill and skilled local labour offered us many fresh options in terms of design which are not normally available on a project…throughout you can see us playing with these possibilities,” added Adjoubei.

Vertical beams that support the roof are also fashioned from split tree trunks, their charred exterior mirroring the dark facade of the adjacent burnt-out building. Formerly a bath house, it will be transformed into into a year-round teaching space in 2018 as part of another workshop.

Rows of birch saplings felled from a nearby forest surround the perimeter of the platform the school is set on to form permeable classroom walls.

Left in their natural state, the white colouring of the birch bark dramatically contrasts the main school’s blackened-wood cladding to create a zebra-like pattern around its perimeter.

This play on colour is inspired by Norwegian architect Sverre Fehn’s Nordic Pavilion for the Venice Biennale. Completed in 1959, the pavilion features a pale slatted ceiling through which several trees grow.

“In the Nordic Pavilion the whiteness of the concrete contrasts with dark tree trunks that grow up through the roof, and echoes of this relationship are evident in our finished project,” explained Randall-Page.

The team took the theme Art as Labour for the project, for which they were also asked to observe the park’s tradition of using local materials for artworks and structures.

“We examined the relationship between art and labour in the context of increasing automation and future changes to the notion of ‘labour’,” said Mull and Adjoubei in a text about the project.

Several other student groups have erected pavilions as teaching spaces. Young pupils from Hull teamed up with architectural educationalists Matt+Fiona to build a classroom with pivoting walls on their school allotment, while 200 Swiss students worked together to build a temporary structure to host events and lectures in Zurich.