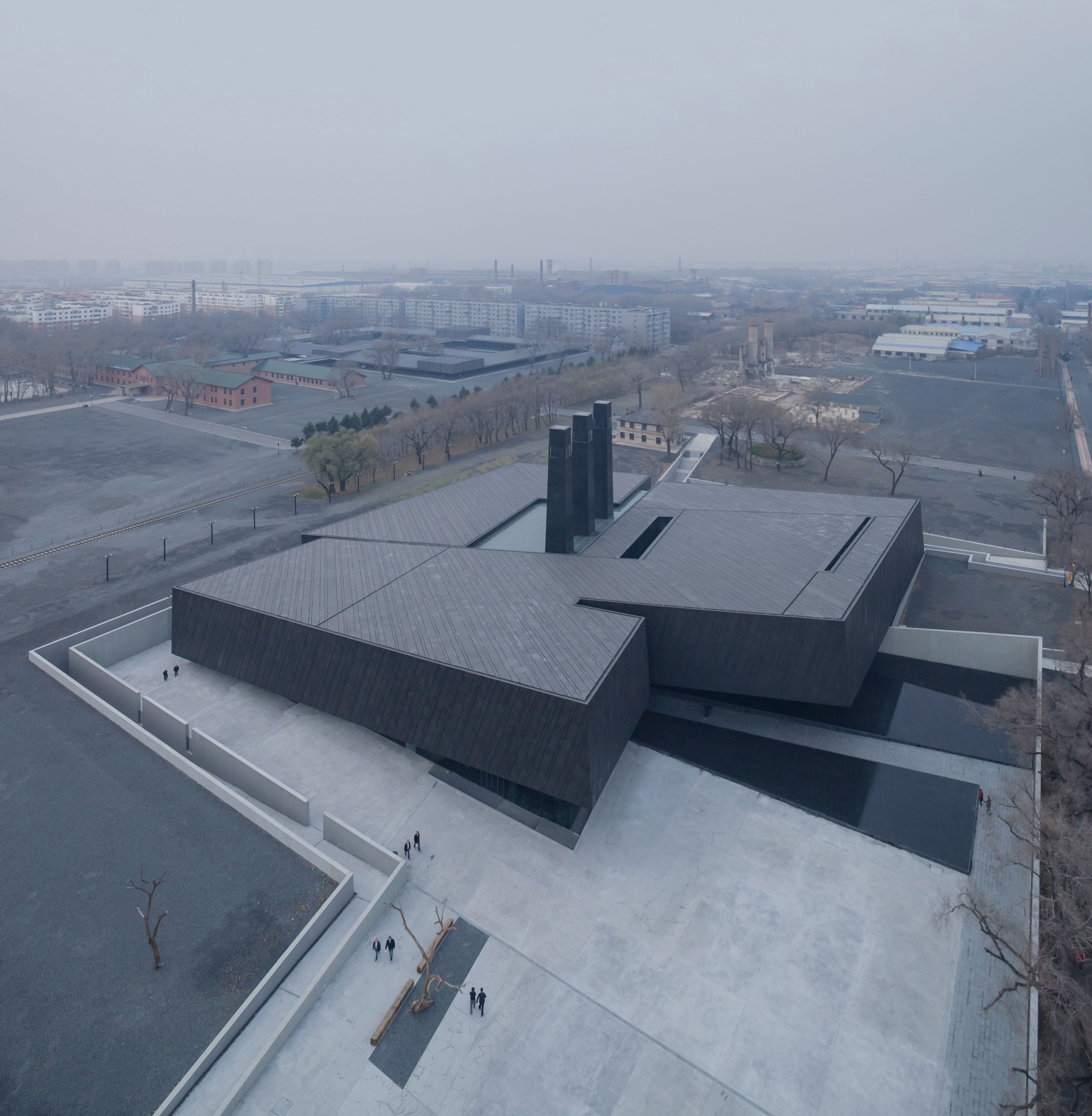 A tilted and fractured black box that emerges from a public square in the Chinese city of Harbin contains display areas dedicated to telling the story of war crimes committed during the Japanese occupation of Manchuria.

The Exhibition Hall of Crime Evidences is located on the site of the ruined barracks used by Unit 731 of the Japanese Imperial Army, which invaded a region of northeast China and Russia in 1931.

A team led by He Jingtang – dean of the School of Architecture of South China University of Technology – chose to position the main exhibition spaces below ground to reduce disruption to this sombre site.

The building was conceived as a “black box” in reference to the flight recorders used in aircraft to record and preserve flight information that can aid investigations into accidents or incidents.

In the case of the exhibition facility, the notion of the black box refers to the building as a space for revealing the atrocities committed by Unit 731, which was established in 1933 and headquartered in the city’s Pinfang District.

Thousand of people were killed or used as subjects for medical experiments including the testing of biological and chemical weapons prior to the Japanese surrender in 1945, when the soldiers bombed and destroyed large sections of the base before fleeing.

“The concept of the ‘black box’ is basically an unearthing of the crimes committed by Unit 731,” said the project team.

“We hoped to use the concept of black box as a container from the beginning, and gradually unfold the dusty and hidden story to people and expose the Japanese crimes against humanity.”

The dark volume features a slanted form with a charcoal-grey roof that appears as an extension of the gravel-covered terrain from which it emerges. Its partial submersion in the square and gently sloping shape reduce the building’s overall scale.

Fissions in the facades and roof break up the mass of the halls, adding depth to the form and creating tonal shifts intended to make the structure feel like part of the landscape.

“The black box collapses, sinks, and falls apart on the site, leaving an eternal scar, as if the land is incised by a sharp scalpel,” said the architects.

“This series of simple acts establishes interior-exterior building connection while creating a communicative and dialogic space.”

A key consideration for the architects was how to maintain the sense of barrenness generated by the ruined barracks and open space, which was originally close to an airport but is now subsumed into the city’s urban fabric.

The building occupies the only area without any existing historical structures, and is set within a sunken plaza that reduces noise from the adjacent street.

Landscaping on the east side of the site provides separation between the building and city. Paved surfaces extending towards shallow pools near the entrance reflect the structure’s angular form.

A passage that extends from the western edge of the subterranean space passes beneath an existing railway line and re-emerges as a gradual ramp leading past a row of trees to connect with the ruined buildings.

Photography is by Yao li.