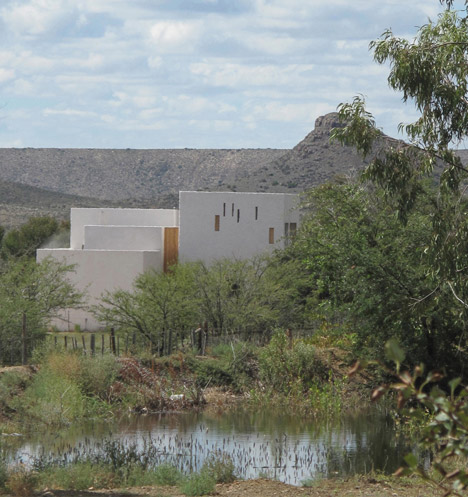 Small slots based on the position of constellations puncture the walls of this South African house by Openstudio Architects, bringing light in during the day and offering starry views at night (+ slideshow).

Swartberg House was designed by London-based Openstudio Architects as a holiday home for a couple with a young child.

Slot windows, which are arranged on the walls in patterns inspired by constellations, offer glimpses of the stars at night and cast stripes of light across the walls and floors in the day.

“We were interested in the poetics of dwelling in the land, and connecting to the special qualities of the landscape in a way that is not obvious, but which adds to the depth of the house,” architect Jennifer Beningfield told Dezeen.

Small openable windows have also been added to provide ventilation, and larger windows reveal views of the surrounding mountains.

“We were interested in the light of the desert, and how this changes during the day and the year. The openings are a way to modulate and focus this light,” said Beningfield. “The house opens to the particular qualities of the landscape, and provides mechanisms to retreat from the sometimes blinding and harsh light.”

The architects designed the two-storey house as a collection of cube-shaped volumes, which are covered inside and out in rough-cast plaster – a commonly used local render, chosen to give surfaces a greater variation of light and shadow.

“The owners wanted a contemporary building that has the texture and depth of a much older structure,” said Beningfield. “They also wanted it to meet the mountain and sky in a subtle way, and not have a flat, horizontal typical modernist box.”

The cube-shaped arrangement was also chosen so that it could be added to later, if the owners decide to extend the house.

“You can add to it in lots of ways without disturbing the composition,” explained Beningfield.

The ground floor has a master-bedroom and bathroom, children’s bedroom, living room, kitchen-diner and a pergola-covered terrace. The upper floor has two guest bedrooms, a shared bathroom and two terraces.

The living room and children’s bedroom both feature taller ceilings, overlooked by voids on the upper level, which allows fresh air to circulate around the house, and heat to rise and dissipate.

Brick was chosen as the main construction material, and also used for all the flooring inside and outside, in order to work with the skills of local builders.

“The building is supposed to be non-domestic and robust. It has the quality of being almost agricultural,” said Beningfield.

Brick was also selected for its ability to naturally soak up heat and release it when it gets colder, helping to modulate temperatures inside, and shutters have been installed to shield the house from harsh summer heat.

“Temperatures can range from minus six to 40 degrees celsius throughout the year,” said Beningfield. “In the heat of summer the house can be shuttered and darkened, a refuge from the light and heat, while in winter the large openings act as sun-catchers, allowing the sun to heat the dark brick floors to radiate warmth in the chilly evenings.”

The shutters are made from white American ash, which is also used for the doors, door frames and shelves inside.

“The attention to detail in the joinery and its tactile qualities offset the roughness of the plaster walls and brick floors,” said Beningfield. “It is a way to acknowledge that the things we touch and hold are materially different from the things we only walk past.”