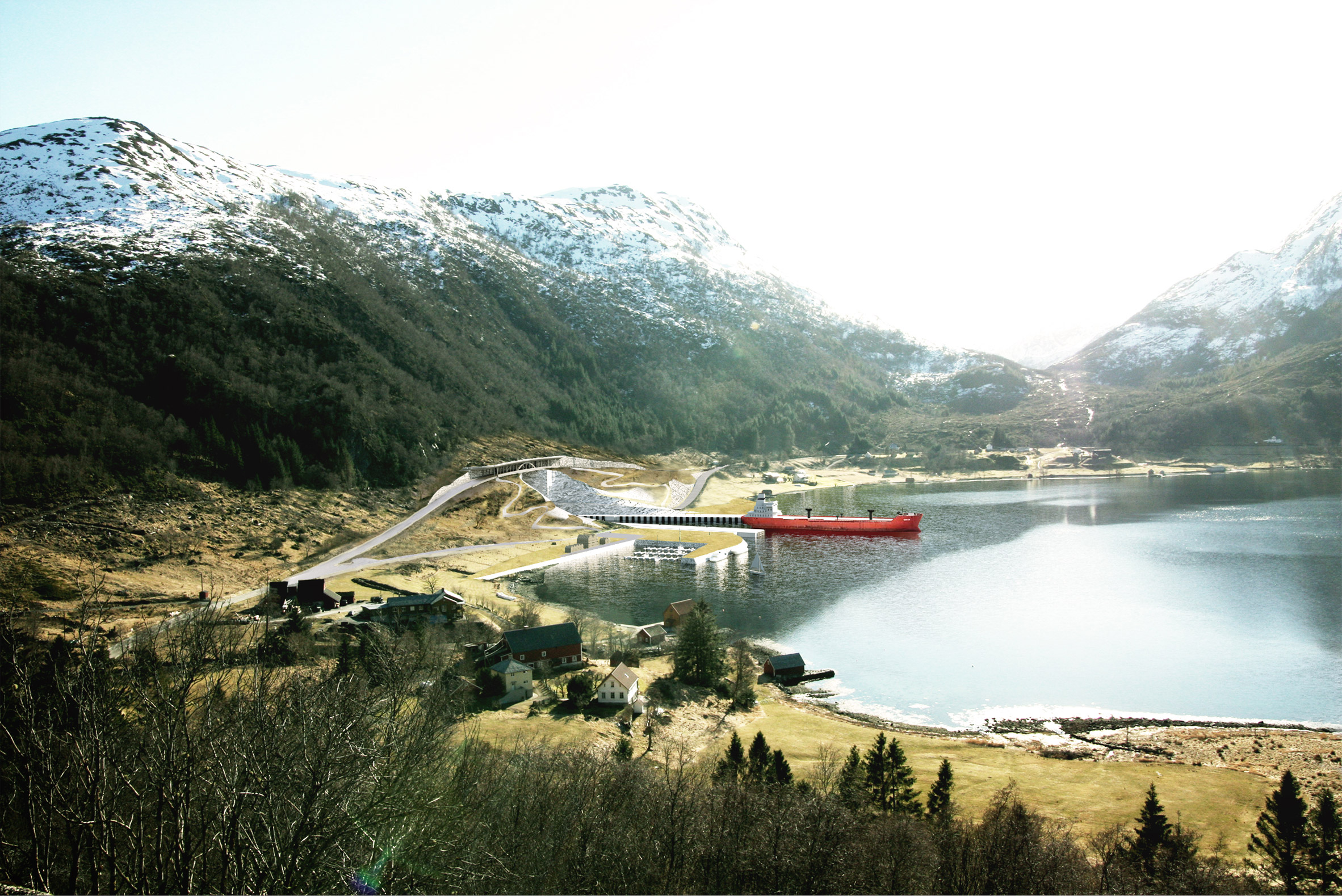 Snøhetta has designed a pair of grand stone arches for the entrance points of a 1.7-kilometre shipping tunnel, which will cut through a peninsula to bypass a particularly dangerous stretch of Norway’s coast.

The 37-metre-high and 36-metre-wide Stad Ship Tunnel will pass through the narrowest part of the weather-beaten Stad peninsula between Kjødepollen and Moldefjorden. Snøhetta designed a set of stone arches to mark the mouths of the tunnel.

“The Stad sea is the most exposed and most dangerous stretch along the Norwegian coast. It has very problematic wave conditions and it is the area with by far the most and strongest winds,” said Snøhetta, which is working with Olav Olsen of Norwegian consulting firm Norconsult to realise the 2.3billion Kroner (£267 million) project.

“Very high waves coming from different directions at once and can create critical situations,” added the architects. “The objective of the project is to improve navigability and safety of maritime transport around Stad.”

Snøhetta based the design of the entrances on the peninsula’s characteristic stone walls, which mark cultivated farmland from dense forest.

Walls made from both wire-cut and blasted stone will surround the arches and terrace down to meet the rural landscape.

At Moldefjorden the landscape is steep and largely unpopulated, so it will be possible to create a dramatic entrance point, with an existing road rerouted over the top of the tunnel on a new bridge. But a more sensitive addition will be created at Kjødepollen, where there is a small community of farmhouses.

“It is important that this vast procedure is being shaped in such a way that the little place Kjødepollen can relate to the new situation in a way that interacts with the existing landscape,” explained the architects.

“It is obviously a challenge that the scale of the project breaches everything in the village. Still, the interaction between the terraces and the scale of the portal provides some interesting opportunities,” they continued.

“We have therefore proposed a general concept for terrain treatment that attempts to build on its existing agricultural stone wall building method wherever possible. The intention is that the new and old terraces are blending into the landscape in a unified, harmonious and visually aesthetic interaction.”

The new bridge at Moldefjorden will offer boat enthusiasts a view point to observe ships approaching the tunnel mouth, with a carpark and trails offering the chance for closer inspection.

Inside the tunnel, Snøhetta has also designed the way-finding lighting, using LED hoses designed to withstand the salt-water environment. The lighting could be adjusted to create a range of effects, including an experience of the Northern Lights.

“The stacked stone walls forming soft lines that are horizontal. They provide a nice visual impression, as they blend in as natural elements of the landscape,” said the studio.

“It will undoubtedly be a special experience for tourists aboard passenger ships, as well as for smaller boats in a convoy. It is crucial that this experience will be comfortable and quiet.”

Snøhetta, which has offices in Oslo and New York, came in at number 37 on the inaugural Dezeen Hot List.

The firm completed several major projects last year, including its extension to the SFMOMA and a visitor centre for world-famous Lascaux cave paintings.

Recent projects include a charred-timber treehouse in northern Sweden and a prototype of an arch-shaped memorial for Desmond Tutu in Cape Town.