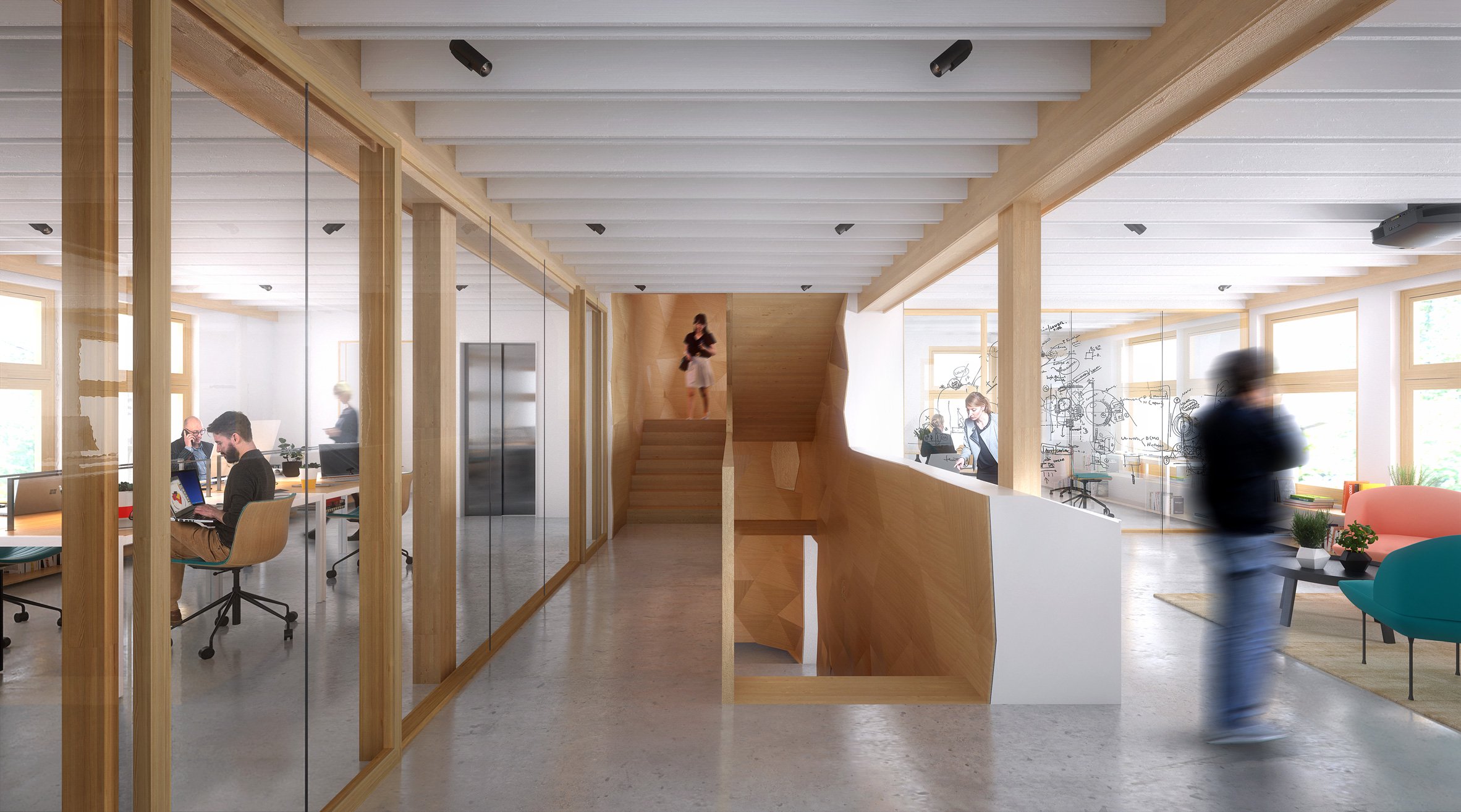 Harvard University, Snøhetta and Skanska Technology have teamed up to retrofit an old house, demonstrating how existing buildings can be made more energy efficient to help address climate change.

Dubbed Harvard HouseZero, the project calls for transforming the Cambridge, Massachusetts, headquarters of the Harvard Center for Green Buildings and Cities, which was founded in 2014 by the university’s Graduate School of Design (GSD).

The centre is housed within a cedar-clad, pitched-roof home that was constructed more than 80 years ago. The three-storey, timber-framed building is situated on a residential street near GSD, which purchased the dwelling in 2011.

The project aims to demonstrate how existing structures can be modified so they consume less energy.

“HouseZero attempts to address the global environmental challenge of climate change by focusing on existing buildings, which account for energy inefficiency and carbon emissions on a vast scale worldwide,” said the team, which comprises Harvard University, architecture firm Snøhetta and Skanska Technology.

“Before now, this level of efficiency could only be achieved in new construction,” added Ali Malkawi, professor of architectural technology and founding director of the centre.

“We want to demonstrate what’s possible, show how this can be replicated almost anywhere, and solve one of the world’s biggest energy problems – inefficient existing buildings.”

The home will undergo a number of major overhauls.

The plan calls for improving the building’s insulation layer and creating a more air-tight envelope. Ample daylight will be provided via new and enlarged windows and skylights with high-insulation values.

Indoor air quality and comfort levels will be constantly monitored, and will inform a system that automatically opens and closes windows.

“Ventilation is controlled by a window actuation system, which employs sophisticated algorithm-based software and room sensors to automatically open and close windows to maintain a quality internal environment,” the team said.

On the east facade, the team will install a glazed, solar chimney that uses sunlight to create thermal updrift. The vent will draw hot air out of the building’s basement, which is being converted into an event space.

The plan also calls for new flooring made of concrete with a high level of slag cement, which is a byproduct of iron blast furnaces.

Adding a high-density material such as concrete to the timber-framed structure will enhance its thermal inertia, enabling the building to “smoothly buffer swings in local temperature”.

An underfloor radiant system and ground-source heat pump will also be installed. “The minimal heating and cooling systems are driven by a small responsive pump, adapted from ultra-efficient Nordic technology,” the team said.

Energy for the home will be generated via rooftop photovoltaic panels and stored in a battery for use on cloudy days. Surplus energy will be fed back into the city power grid.

A solar thermal panel on the roof will supply hot water for occupants.

Ultimately the team aims for the house to generate all of the power it uses. “HouseZero targets a long-term goal of complete energy autonomy,” the team said.

The design of the interior calls for open plans, glass partitions and exposed wooden beams. Faceted walls in a new stairwell are intended to help muffle circulation noise and reduce disturbances to the workplace.

The interior material palette includes natural clay plaster, birchwood and nanoceramics – all chosen for their performance capabilities and local availability. Using non-emitting materials was a guiding concern in order to preserve air quality.

The team also aims to reduce “hidden emissions” that are generated throughout the building’s life cycle. Measures are being taken to reduce emissions during fabrication, transport of building materials, construction, maintenance and decommissioning.

“Incremental reduction in emissions made now and in the immediate future will have far wider reaching benefits than larger cuts made later, when the effects of climate change are likely to be far more dramatic,” the team said.

The revamped centre will serve as a flexible laboratory, where new components for energy exchange can be evaluated. The hope is for the house to serve as a prototype for similar projects.

“The long-term goal is to pioneer new energy-efficient solutions to be released into the market,” said the team.

“As a first-of-its-kind research project, HouseZero demonstrates how to transform a challenging building stock into a prototype for ultra-efficiency, rapidly reducing the level of reliance on energy-intensive technology while simultaneously creating comfortable indoor environments.”

Sustainability remains a major topic of concern within the design profession. The American Institute of Architects recently said that many architects are still not addressing the environmental impacts of their buildings, in reaction to Aaron Betsky’s opinion piece for Dezeen that criticised the AIA for giving awards to buildings that boast sustainable credentials but lack other design merits.

The post Snøhetta’s Harvard HouseZero aims to “solve one of the world’s biggest energy problems” appeared first on Dezeen.