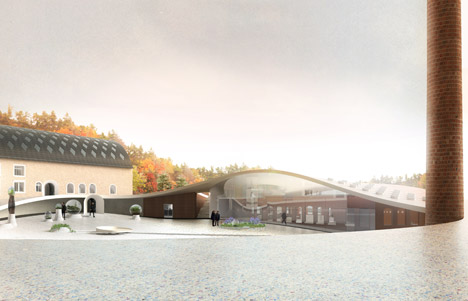 News: SO-IL and FREAKS freearchitects have together won a competition to redesign a glass museum, workshop and gallery on the site of an 18th-century glass factory in north-east France.
For its first project in France, New York office SO-IL is collaborating with Parisian studio FREAKS freearchitects to reinvent the Site Verrier Meisenthal – a cultural centre occupying the buildings of a former glass factory near the village of Meisenthal in the Northern Vosges Natural Park.

The factory, which produced utility glassware as well as hand-blown Christmas tree baubles, closed its doors in 1969. It reopened as the Meisenthal Glass Museum in 1978, while a former workshop on the site was converted into the International Glass Art Centre (CIAV) in 1992 – used for displaying contemporary and traditional glass design.

Local council Communauté de Communes du Pays de Bitche has commissioned the architects to modernise these two existing spaces with the addition of a new theatre and exhibition gallery, transforming the complex into a 5,000-square-metre cultural centre for the region.

The new 500-seat black box theatre and exhibition space, named the Cadhame, will host art installations as well as concerts and performances.
Concept drawings for the project show a softly sloping concrete rooftop enclosing these structures and surrounding a new central plaza that is also bordered by the existing factory buildings.
An original brick chimney rises from one corner of a space that will be used to host outdoor performances, as well as festivals and a Christmas market.

“Working on gathering separate cultural entities is something we have already experienced,” said FREAKS partners Guillaume Aubry, Cyril Gauthier and Yves Pasquet.
“But the status of Meisenthal is even more challenging since it has to be a very subtle combination of delicate renewal, together with new contemporary additions within a deeply rooted local context.”
The architects will also create new workshop areas, art storage and office facilities, as well as a cafe and restaurant.

SO-IL wants the project to “foster a dialogue with the historic character of the place while defining a new and contemporary identity for the institution”.
“The design is inspired by the transformative process of glass making; a reinvention of the site into a new form born from its history and looking towards the future,” said SO-IL partner Ilias Papageorgiou.

The project is expected to be completed in phases between 2015 and 2022.
Images courtesy SO – IL. Aerial photograph by Jean-Claude Kanny.