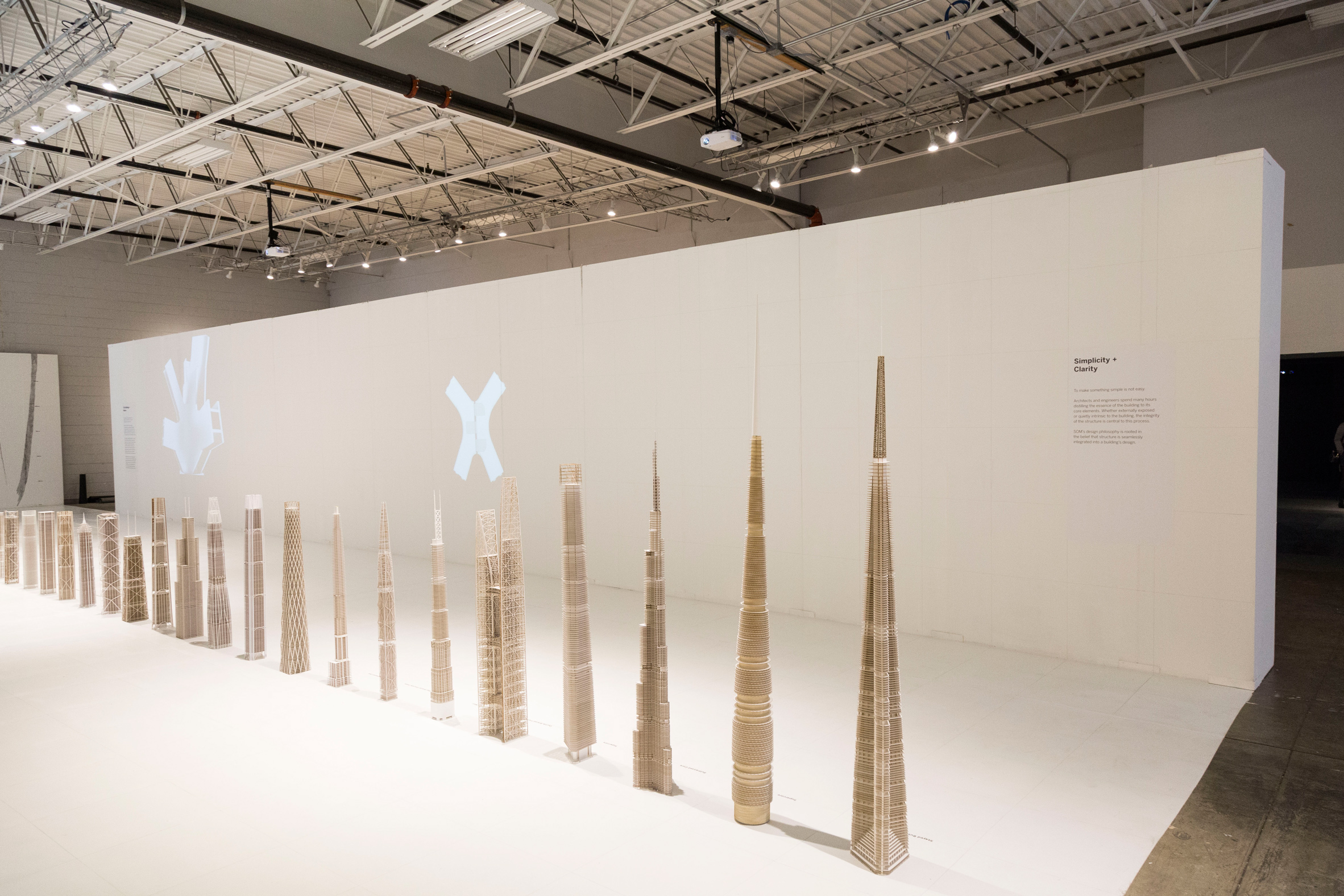 A row of intricately detailed architectural models take centre stage at this pop-up exhibition celebrating the beauty of engineering by Skidmore Owings & Merrill, which coincides with the Chicago Architecture Biennial.

The 30 structural models presented at 1:500 scale are arranged in ascending height order across the breadth of the exhibition space at the Mana Contemporary Chicago art centre, in the city’s Pilsen neighbourhood.

The show opens with a quote from partner Bill Baker, the engineer behind world’s tallest building, the Burj Khalifa: “An engineer should design a structure that an architect would be ashamed to cover up”.

“The idea of showing the models is we’ve actually stripped away the finish,” senior structural engineer Samantha Walker told Dezeen.

“If you strip away the finish you still have the architecture and that’s what we’re trying to showcase, that the engineering and architecture are the same.”

The firm is known for its innovative skyscraper design and has created some of the tallest towers in its home city, including the 1969 John Hancock Center with its distinctive cross-braced facades.

SOM is currently working on a number of skyscraper developments across the world, with new high-rise developments set to change the skyline of the Sri Lankan city Colombo and Bangkok, Thailand. Models of these towers are included in the lineup alongside a maquette of the 828-metre Burj Khalifa tower in Dubai.

The exhibition also includes a number of hand-drawn sketches, videos and mock-ups, and dedicates a room to the firm’s research into topics such as hybrid timber construction, and another to the practice’s collaborations with artists like Pablo Picasso, James Turrell and James Carpenter.

The show has been exhibited across Europe, but this final room is a special edition for the Chicago leg of the tour.

“Every time we exhibit we build it up a bit,” said Walker. “We’ve been collaborating with artists for many years, it goes back to Picasso.”

“To us, architecture and art are very similar when it comes to looking at it from an engineering aspect – the way we approach buildings is the same way we would approach a piece of art,” she continued.

Engineering x [Art + Architecture is open from 1pm to 4pm at weekends until 7 January 2018 – the duration of this year’s Chicago Architecture Biennial.

Mark Lee and Sharon Johnston, co-founders of Los Angeles-based practice Johnston Marklee, are the artistic directors for the biennial’s second edition. They invited 140 architects to participate under the title Make New History, a theme that emerged from the inaugural show in 2015.

“The biennial is looking back to look forward,” Lee told Dezeen in an interview prior to the events kick-off. “We thought history was an important way to re-think its relationship with practice today.”

The main programme for the biennial is being hosted at the Chicago Cultural Center, which opened to press and professionals today. The show opens to the general public on 16 September 2017 and will continue through to 7 January 2018.