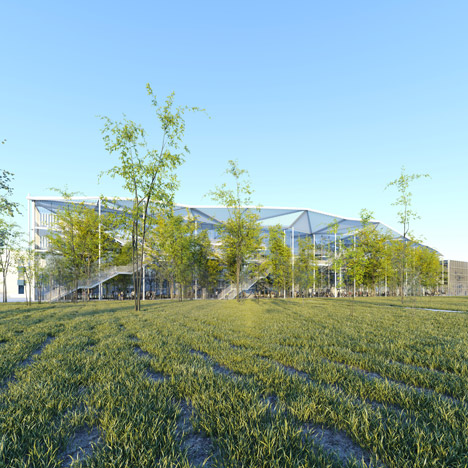 A team led by Japanese studio Sou Fujimoto Architects has unveiled images of its competition-winning proposal for a Paris university building filled with trees and plants.

The architects plan to create a building with a glazed facade that opens out to the park, as well as a grand atrium where spaces for learning and socialising are organised around plants and trees.

“The architectural concept is flexibility, mingling and openness,” said the architects in a statement. “People won’t pass each other in corridors anymore, but meet in vivid places, in a unique space bathed in soft light, with surprising and changing views.”

The 10,000-square-metre building will accommodate 150 staff and 2,000 students. As well as various lecture halls and classrooms, it will include spaces designed around digital learning.

A cafe and several spaces designated for relaxation will be dotted around the atrium, in the form of bridges, balconies and platforms. Thanks to the glazed facade, these spaces all face out towards the green landscape.

“The building is thus seen as an open space revealing the activities taking place in its heart and stands as an architectural and academic emblem of the future neighbourhood,” said the architects.

The trio was selected ahead of three other shortlisted firms: Atelier 2/3/4, Babin + Renaud and Chartier Dalix Architectes.