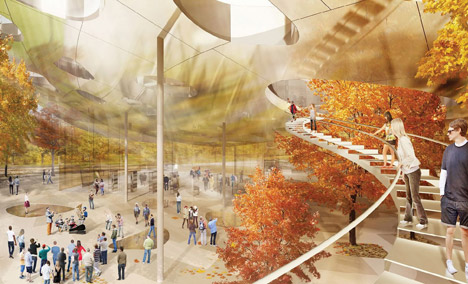 The scheme is part of the Liget Budapest project – one of Europe’s largest museum developments.
House of Hungarian Music by Sou Fujimoto
The Japanese architect proposes a glass-walled building sheltered beneath a white canopy, reminiscent of a giant mushroom. Round openings will create lightwells, which will in some places continue through the floors.
House of Hungarian Music by Sou Fujimoto
The music museum will occupy the site of the former Hungexpo Offices that have been scheduled for demolition.
House of Hungarian Music by Sou Fujimoto
Other projects for the complex will create new homes for the Hungarian Museum of Photography – which will become FotoMuzeum Budapest – and the Hungarian Museum of Architecture, both of which will be designed by Hungarian firm KÖZTI Architects & Engineers.
Hungarian Mueum of Architecture by KÖZTI Architects & Engineers
French studio Vallet de Martinis DIID Architectes has also been chosen to design the Museum of Ethnography. These three buildings will all be situated on Fifty-sixers’ Square.
Hungarian Mueum of Architecture by KÖZTI Architects & Engineers
The complex will be completed by the New National Gallery and Ludwig Museum, but no architect has been named for this building as the jury – chaired by Rijksmuseum director Wim Pijbes and Pritzker Prize managing director Martha Thorne – couldn’t find a suitable candidate among the 80 submissions. A new competition has now been announced.
FotoMuzeum Budapest by KÖZTI Architects & Engineers
Each of the proposed buildings is expected to demonstrate sustainable building techniques, whilst also fitting in with the natural and built heritage of the historic park, which claims to have been the world’s first public park.
FotoMuzeum Budapest by KÖZTI Architects & Engineers
Known as the Liget Budapest Project, the development is spearheaded by The Museum of Fine Arts Budapest and the Városliget Zrt.
Museum of Ethnography by Vallet de Martinis DIID Architectes
“Thanks to this design competition, the museums to be built in the City Park will create a harmonious dialogue with the park and its built environment, representing outstanding architectural value for Budapest and all of Hungary, while catering to the collections and the visitors with their 21st-century functional solutions at a world standard,” said László Baán, ministerial commissioner for the Liget Budapest Project.
Museum of Ethnography by Vallet de Martinis DIID Architectes
Construction of the £190 million development is expected to begin in 2016, with museums scheduled to open in March 2018. According to the organisers, the park’s greenery will be increased by 5 per cent.