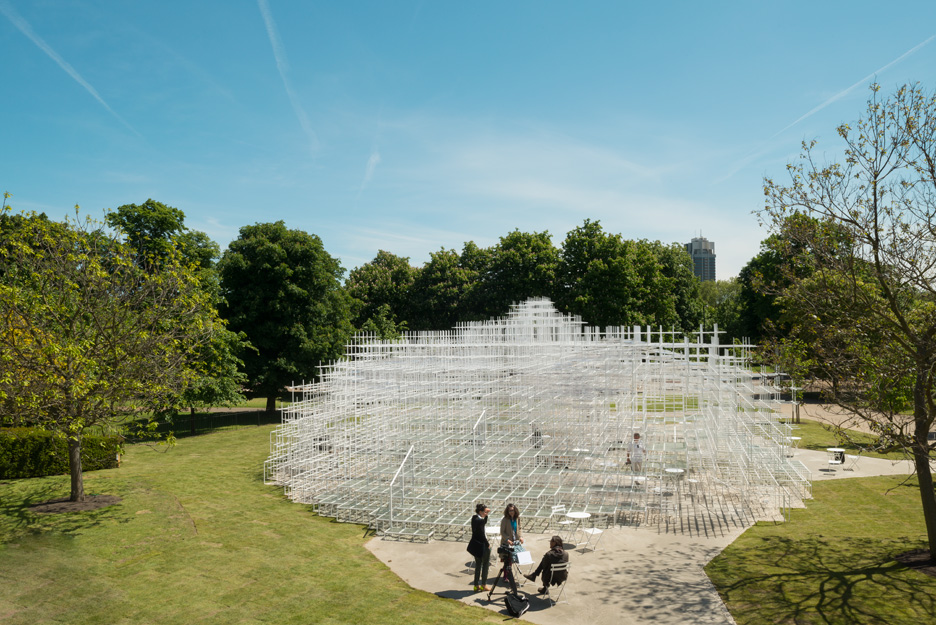 Movie: in the penultimate instalment of our exclusive video series, Julia Peyton-Jones explains why it was a gamble to commission the relatively young Sou Fujimoto to design the Serpentine Gallery Pavilion in 2013.

Born in 1971, Sou Fujimoto was the youngest architect to be commissioned to design a Serpentine Gallery Pavilion, until Bjarke Ingels was appointed this year.

Gallery director Peyton-Jones explains in the movie that the Serpentine Gallery tends to appoint older architects because they are better known outside of the architectural profession.

“The financial plan is predicated on the pavilion being sold,” she says. “So to work with a younger architect – who maybe doesn’t have that easy acclaim outside the profession – was a risk to us.”

If appointing Fujimoto in 2013 was a gamble, it certainly paid off.

Related story: “I tried to create something between nature and architecture” – Sou Fujimoto

“According to The Art Newspaper, it was the most visited free exhibition of design anywhere in the world in that year,” Peyton-Jones says. “That’s a great thing to be able to say.”

Fujimoto created a cloud-like structure made from grids of white steel poles. Variations in the density of the lattice created a transparent structure, which revealed more or less of the gallery and the surrounding park depending on where visitors stood.

“He did something that gave a completely different perspective on the park,” Peyton-Jones says. “It was transparent and light and there was a wonderful relationship with the building because you could look through it.”

Visitors could walk through the pavilion at ground level, or ascend steps to get a better view of the park.

A series of overlapping translucent plastic discs protected visitors from the rain, while maintaining the pavilion’s overall light and airy appearance.

“It was a cloud that we created here in Kensington Gardens for that summer.”

The post Sou Fujimoto was considered “a risk” for the 2013 Serpentine Gallery Pavilion appeared first on Dezeen.