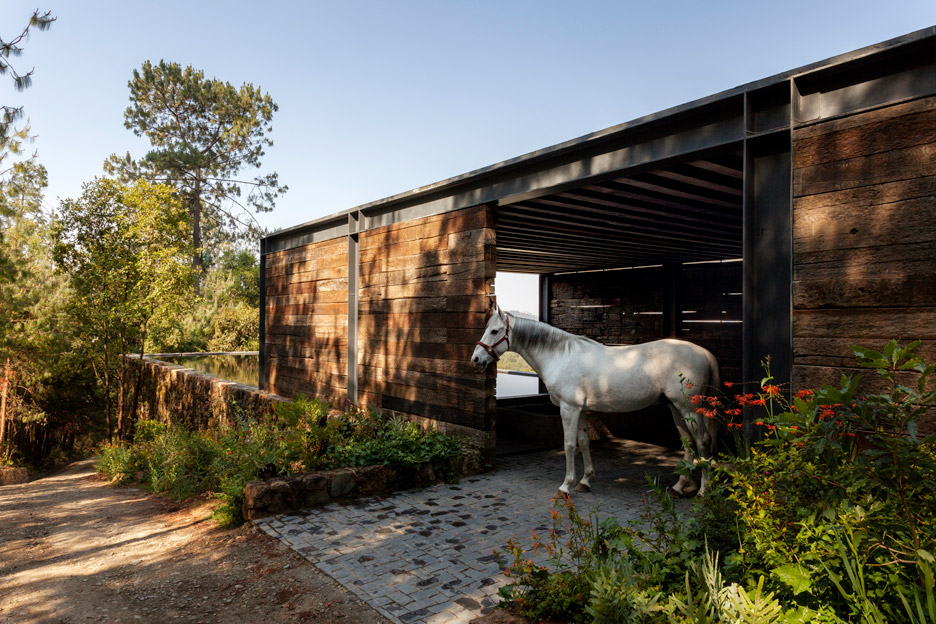 An open-sided shelter made from railway sleepers provides a stable on the roof of this house by CC Arquitectos, which is partially embedded in a slope overlooking a Mexican valley (+ slideshow).

Mexico City-based CC Arquitectos designed the house so that its living areas are sunken down below the level of a road at the back of a plot. This means only the wooden shelter is visible from higher ground.

A stone drinking trough sits at one end of the rooftop structure, which is used as both a garage and as a shelter for horses. Beyond it, a water pool featuring a large sculpture extends out onto the roof of the block below.

A low wall made from wooden railway sleepers is intended to conceal cars when the area is used for parking.

“El Mirador is half buried on one of its sides with the purpose of protecting the habitation spaces from the climate where nature, views, and rustic finishes are the main components, seeking as a goal that these characteristics will last through time,” explained the studio, which is led by architect Manuel Cervantes Céspedes.

The property’s retaining walls are made from local stone, while other parts of the structure are constructed from a combination of steel beams and wooden sleepers. These materials, also used to create the rooftop shelter, were recovered from an old train line.

A large living room occupying the centre of the plan has wide glass doors that allow guests to spill out onto a terrace during gatherings.

Stone seats and tables are built into this patio area, which is fronted by a glass balustrade that permits unobstructed views of the valley.

“The relaxed architectural program and its flexibility in its spaces, reinforces the owner’s strong personality and intense social life,” said CC Arquitectos.

This central living space space is flanked by a bedroom with an en-suite bathroom on one side, and a kitchen and second bathroom on the other.

A large slate island stands in the middle of the kitchen and serves as both a dining table and a workspace. Two large brass-coloured lamps hang over one end of the island, while small spotlights set into the wooden ceiling provide additional lighting.

Old leather-bound suitcases and books are displayed alongside crockery and specimen belljars on the wooden shelving unit that runs along one side of the kitchen, while a counter with in-built units runs along the opposite wall.

The space is finished with neutral-toned textiles and tarnished metal fittings that harmonise with the colouring of the property’s stone and timber walls.