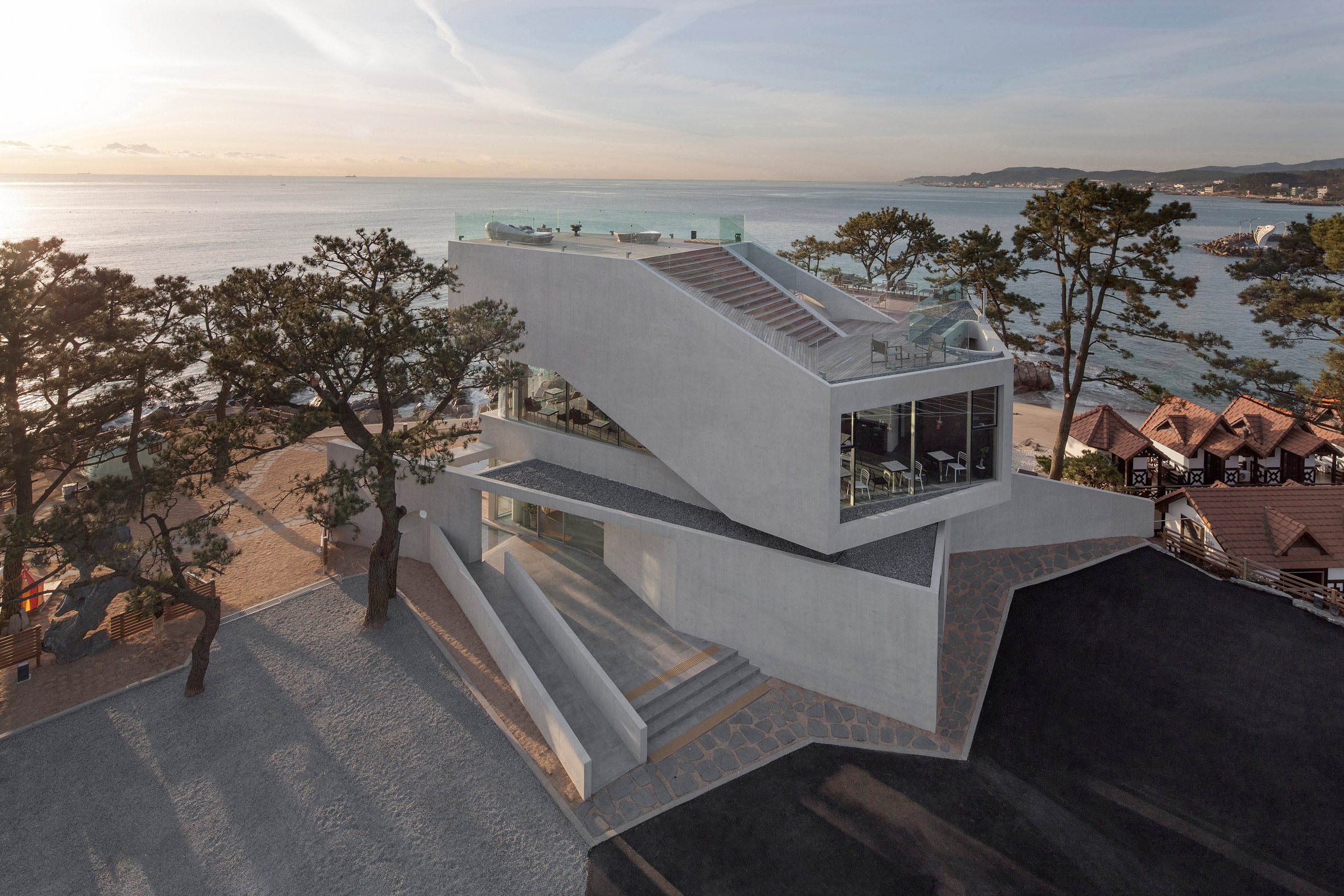 This coastal cafe in the South Korean city of Gijang comprises a series of enormous concrete volumes that dwarf neighbouring houses, and are stacked and rotated to optimise views of the East China Sea.

The Waveon cafe perches high on a hilltop overlooking the rocky shoreline of the area north of South Korea’s second largest city, Busan.

Seoul studio IDMM Architects was asked to develop the 500-square-metre building to make the most of the spectacular views.

“Depending on where and how we see the beach, the sea shows diverse views for us,” said the architects, referring to the varying vistas available from the rocky headland.

“Accordingly, the significant matter of this project is how we can grasp and deal with the relationship between natural scenery and architecture.”

A need to accommodate dining areas with different aspects prompted the arrangement of the cafe as a stack of elongated and angular volumes with large openings integrated into the facades.

Circulation is positioned in a void at the centre of the building to ensure the spaces along the edges remain open and able to look out through full-height glazing.

The central staircase also incorporates stepped wooden seating, with glass balustrades enabling visitors see all the way to the outside when using these spaces.

The layered arrangement of the concrete forms results in a dynamic interior with shifting views between the various internal spaces and out through the large windows.

The ground floor accommodates the main serving area and a large space for seating, as well as toilets, an office and additional storage and catering areas.

Stairs ascend to further stone-floored seating areas lined with glazing on the first and second floors.

Rectangular recesses that punctuate the concrete ceilings throughout these spaces contain concealed lighting.

Further seating is provided in several outdoor spaces, including a decked rooftop terrace that can be reached by following a ramp from the second floor.

Steps built into a steep section of the roof ascend to the very top of the building, where a viewpoint provides a panorama of the surrounding area.

At the rear of the cafe, a series of stepped wooden platforms interspersed among tall pine trees provide an alternative place to relax and have a drink.

The platforms are based on the traditional Korean pyeongsang – a simple outdoor deck used for small communal activities like tea drinking.

The building’s smooth concrete walls are punctured in places by oblique openings which emphasise the angular structure and frame views that change as visitors move around the spaces.

Photography is by Jaeyoon Kim.