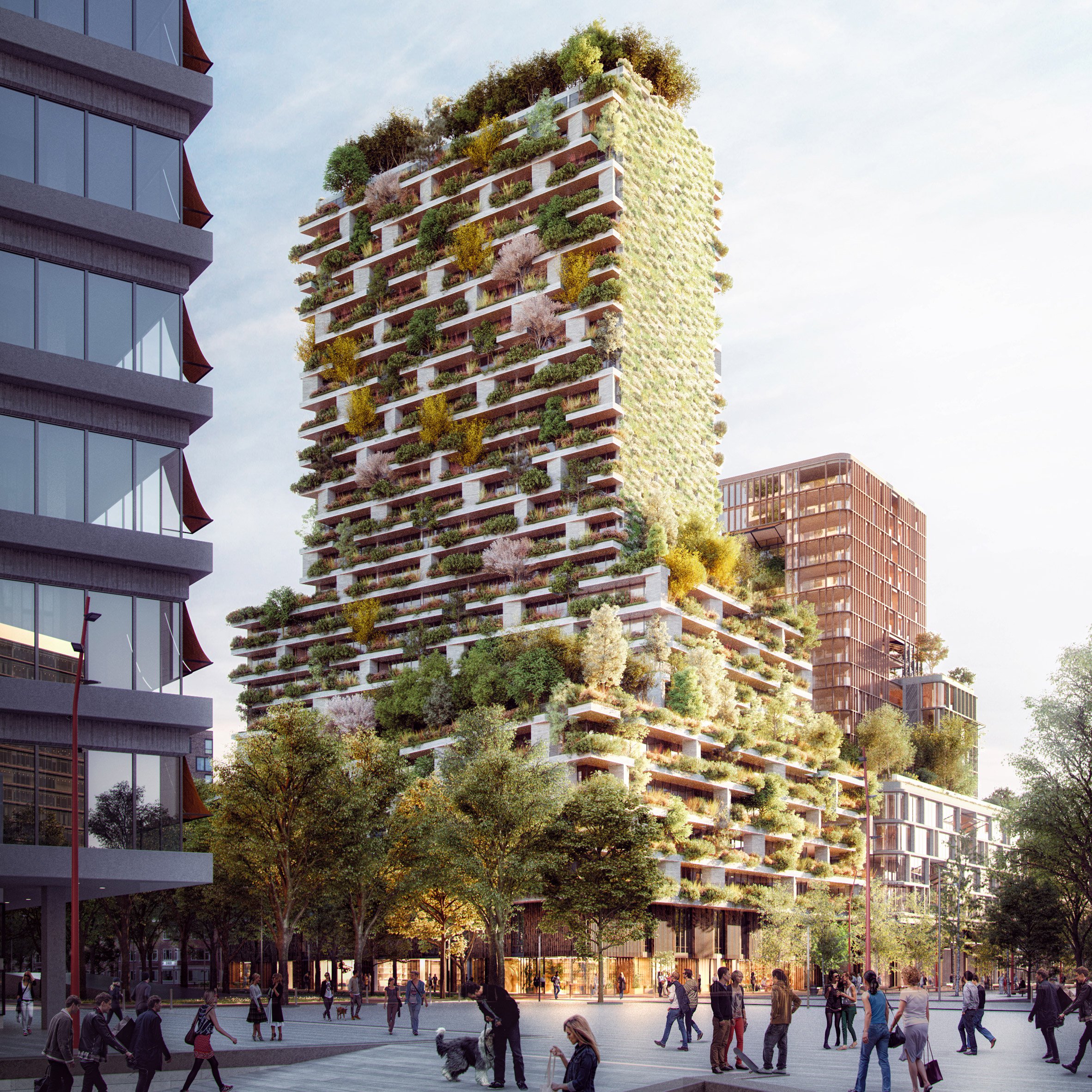 Italian architect Stefano Boeri has unveiled plans for his first “vertical forest” in the Netherlands, a stepped tower covered in 10,000 plants and trees in the city of Utrecht.

Boeri’s studio Stefano Boeri Architetti won a competition to design Hawthorn Tower for a new district in the city’s Jaarbeursboulevard area near Utrecht Central Station, which was recently completed by Bentham Crowel Architects. It will be accompanied by a second tower designed by Dutch studio MVSA.

A total of 360 trees, and 9,640 shrubs and flowers will grow on the balconies and facade of the 90-metre-high building, similar to the studio’s past trials of “vertiucal forests” in both Milan, Spain and Lausanne, France.

As with the earlier projects, the plants used on the mixed-use tower are intended to help absorb carbon dioxide and produce oxygen to improve the city’s air quality. The vegetation covering Hawthorn Tower will amount to one hectare of woods, which the architect says will absorb 5.4 tonnes of carbon dioxide.

Hawthorn Tower will feature an urban forestation research centre on the ground floor called the Vertical Forest Hub to track Boeri’s schemes, both in Europe and worldwide.

The upper floors of the building will be occupied by a mix of offices, fitness and yoga areas, bike parking places and a public leisure space.

Construction on Hawthorn Tower is slated to start in 2019 with completion expected in 2022.

Stefano Boeri Architetti also recently unveiled plans for a city near China’s Liuzhou made entirely of “vertical forest” towers. It forms part of the Forest City concept, which will see cities made up of plant-covered skyscrapers to eat up China’s smog. Other projects in the scheme includes a design for city in Shijiazhuang and a pair of plant-covered skyscrapers in the centre of Nanjing.

Plant-covered buildings are proving extremely popular with architects, including Kengo Kuma and Herzog & de Meuron all covering projects in greenery.

Recent examples include one of the world’s tallest living walls by Jean Nouvel and MVRDV’s plans for a residential tower complex in Eindhoven with spiky plant-covered roofs and greenhouses.

Rendering is by Imaginary A2 / Stefano Boeri Architetti.