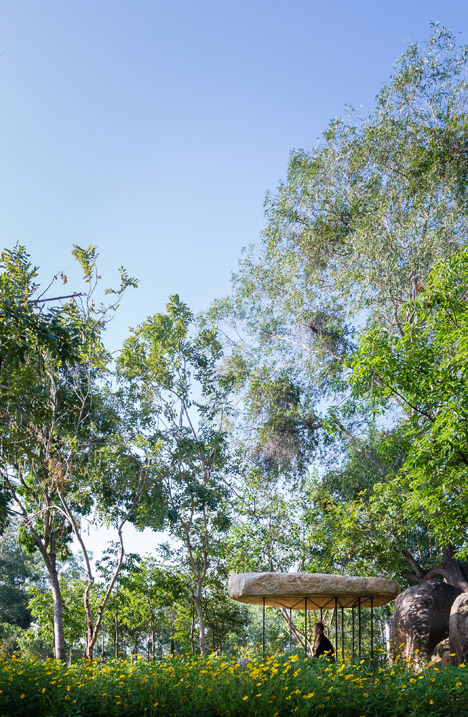 Intended to encourage more austere worship for Buddhists, this stone shelter in a Vietnam city park was designed by a21studio – the firm behind the 2014 World Building of the Year (+ slideshow).

The architects believe these grand temples are superfluous and contrary to the ethos of the religion, so wanted to produce a pared-back place of worship more connected to the natural environment.

“Buddhism is struggling to adapt to modern society,” said the team. “Buddhists, nowadays, prefer living in magnificent temples and monuments.”
“As Buddhists, we are wondering whether it is too hard to renounce conveniences and comforts in the modern life.”

The tiny 2.3- by 3-metre pavilion consists of a granite stone slab mounted on pillars made from twisted reinforced-steel rods.

A set of craggy stone steps lead up a rocky slope to the structure, which sits in a clearing among a patch of trees. It is open on all sides to the elements and has a floor of wild flowers and grasses.

Visitors must crouch to move beneath the shelter of the canopy, where a solitary candle rests on a ceramic saucer.
“People usually have to bend when they are entering a pagoda in Asia,” explained studio architect Toan Nghiem. “That’s a traditional way, like you are showing your respect.”

According to the architects, the structure is inspired by the sheltering canopy of the sacred Bodhi Tree – under which Buddhist founder Siddhartha Gautama – the Buddha – is said to have attained enlightenment through meditation in the 6th century BC.
Concept sketch
“We made a pagoda, a place dedicated to the spirit, where users are not driven by the needs and comforts of life, as animals living among nature,” added the team.
Photography is by the architects.
The post Stone canopy by a21studio forms monastic pagoda in a Vietnam park appeared first on Dezeen.