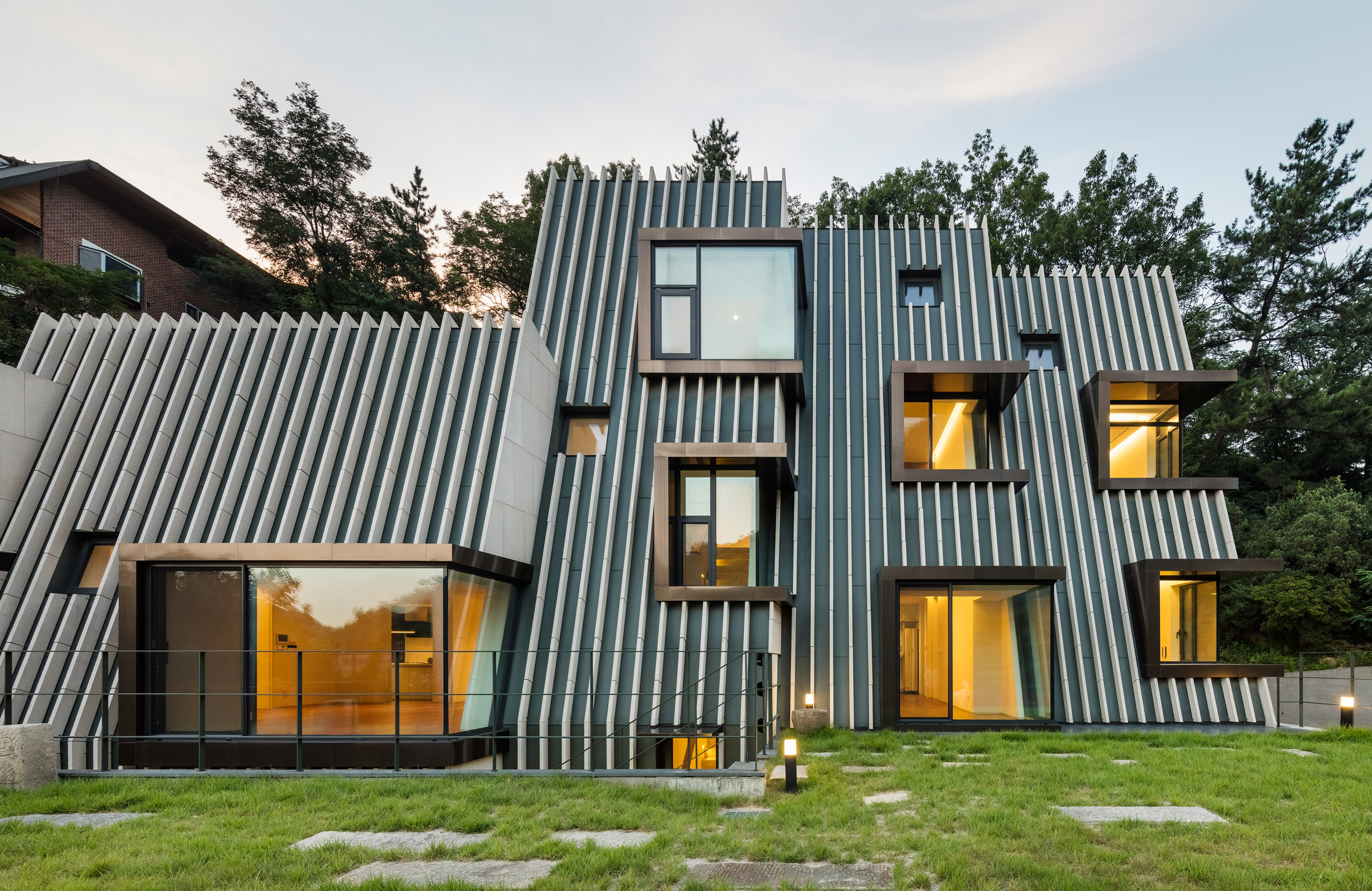 Limestone louvres and boxy windows cover the angled walls of this home outside Seoul, which was designed by local studio Poly.m.ur to house three generations of the same family.

The Deep House is located in a scenic preservation zone at the foot of a trail that leads up to Bukansan,  a mountain on the northern periphery of Seoul in Jongno District.

Poly.m.ur‘s elderly client asked for a house that would suit both himself and his son’s young family.

He wanted great vantage points of the surroundings, but local planning conditions only permitted the construction of a two-storey house with a maximum height of eight metres.

Aiming to make the house taller than this, the studio, lead by architect Homin Kim, found a loophole that meant the height could be increased to 12 metres if the pitch of the roof was angled at a ratio of 1:3.

Kim segmented the residence into five blocks, three of which are two storeys high and two one storey, and gave one side of the roof a pitch of this angle. The south-facing facade slants up to meet it and forms the other side of the roof.

The vertical stone louvres cladding the facades prevent the house from overheating, but are also designed to blend in with the natural scenery and make reference to the neighbouring tile-covered residences.

“The most striking feature of the Deep House is its roof, slanted at an angle, which streamlines flawlessly with the walls as a single unit,” said the architects.

“By opting against conventional use of the concept of roof and eaves, and adopting exterior stone louvers, the volume of the Deep House is dispersed in shallow depth throughout,” they continued.

The volumes progressively stagger forward to open up side views from large corner windows, which the architects worked into the design after spotting the same feature in the client’s previous house.

Some of the openings are indented in the facade and others project outwards, creating nooks inside for the residents to enjoy the afternoon tea or relax with a book.

“Rooms and the size of corner windows were strategically laid out to allow maximum benefit of the spectacular scenery from inside, while minimising adverse impact of chilly winter draft,” the architects explained.

“Corner windows also create a ‘room inside a room’ that is not separated by any physical boundary of walls,” they continued. “The room may appear as one space, but we can clearly perceive that an independent space exists there.”

A garden wraps the front of the house, while the entrance is located at a subterranean level on the eastern side, where the facade is made of exposed concrete.

The older generation occupies the ground floor of the house, which features an open-plan living space, two bedrooms, as well as a study and bathroom.

An elevator connects the lower and upper levels to enable ease of movement for the client, who has difficulty using the staircase.

The younger generations occupy these upper levels, with the most western block opening onto a decked roof terrace that spans the top of the two single-height blocks.

Other residences in and around Seoul include a house with a retractable staircase and a loft for cats, and another with small windows and diagonal markings.