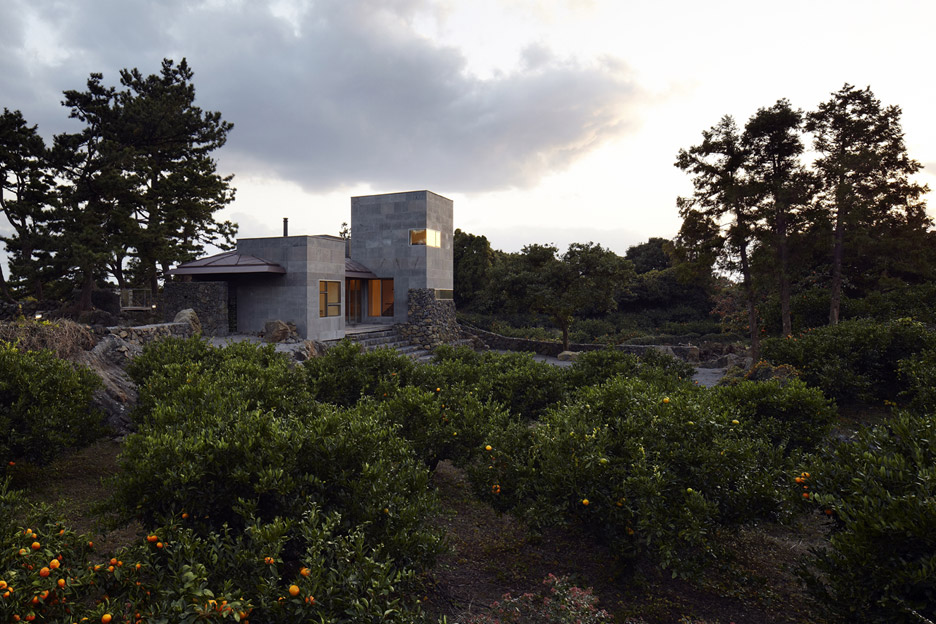 Seoul studio Doojin Hwang Architects has completed a stone house with a bowed roof for a citrus farm on the South Korean island of Jeju (+ slideshow).

Residence in Bomok is a reinforced concrete structure faced with pale grey stone, but stands on a platform constructed using the volcanic rock that many of Jeju’s buildings are constructed from.

The building is located a few hundred metres inland from Bomok cove on the south shore of the island, and orange groves sprawl out from the sides of the site.

A small stone reservoir on the site provided Doojin Hwang with the starting point for the design, which comprises a series of stone cubes connected by a curving roof.

This bowed roof references the island’s traditional residences. Kengo Kuma gave a similar form to a cluster of art villas covered in volcanic rubble, and also it features on a renovated 100-year-old farmhouse on the island by Z Lab.

The smooth stone structures rise above the rough rock base – a type of volcanic stone used to protect houses and exposed roads on the island’s wind-swept coastline. Matching stone walls and boulders surround the house and orchards.

“There was a small stone cube on the site, a water reservoir,” explained Hwang. “We designed a few more cubes, each housing rooms and spaces, connected by a gently sloping roof, inspired by traditional Jeju architecture.”

“The slopes and wrinkles of the terrain, rocks and trees scattered around the site, all become parts of the house,” he added.

The primary living spaces and bedrooms are located across the ground level of the building, while a tea room and a deck occupy a small upper storey.

Glass walls described by the architect as “porosity valves” can be drawn or shut to expose or shelter the bridging portion of the house, depending on the weather.

“A house in Korea needs to respond to the changing weather,” said the architect. “The interior becomes the exterior and vice versa.”

Where the curving roofline and straight walls intersect, the material changes from grey stone to white plaster.

Wooden furniture is built into the walls and a series of platforms create a split-level living space.

“The exterior material of the cubes becomes a part of the interior, with the space in between filled with white walls and built-in furniture,” said Hwang.

This feature is based on a hanok – a name for traditional Korean housing that reflects the local climate and landscape, in this case curving rooflines and volcanic stone walls.

“The overall design has a strong touch of a hanok, if not in style but in spirit,” said the architect. “Spatial flexibility, changes in floor levels to accommodate both stand-up and floor seating arrangements, cubes conceived as independent yet connected rooms, are such examples.”

Photography is by Yongkwan Kim.