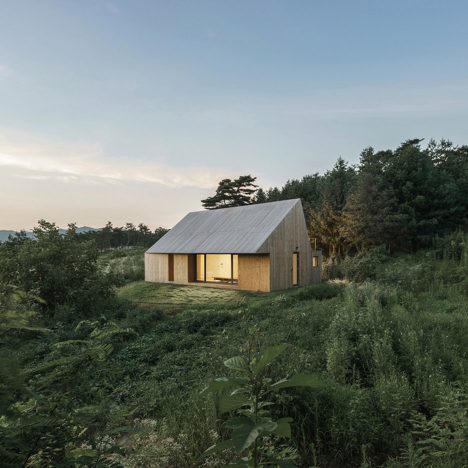 From one side this wooden house in South Korea looks like a typical gabled cabin, but from the other side its roof appears to be misaligned (+ slideshow).

Shear House is designed by STPMJ, a studio with offices in New York and Seoul. It provides a home for a family in a rural village in Yecheon County.

STPMJ architects Seung Teak Lee and Mi Jung Lim treated the project as an opportunity to experiment with the traditional gable roof, which is as common a feature in Korean architecture as it is elsewhere in the world.

They designed a two-storey residence with a basic pitched roof, then shifted the roof outwards slightly. This created a simple, asymmetric gable at one end, while the opposite gable is completely disjointed.

“Shear House adds a new scene on the existing landscape,” said the architects. “The house has two different ends – a typical gable end, and a sliced and shifted one.”

“At the entrance of the town, people face a typical gable wall,” they added.

“As they walk to the house entrance, they slowly recognise the change of eave and shadow, and finally realise the sheared face at the entrance of the house.”

The new angle of the roof creates extra shade at the southern end of the building, where the sun will be the strongest.

To highlight the unusual form, the architects chose to clad the walls, the roof and its underside in wooden planks. Arranged vertically, these lend a uniform appearance to the building’s exterior, which is emphasised by minimal detailing.

“[The] double skin-facade controls heat and humidity, thus the house reduces 20 per cent of heat gain and loss in summer and winter,” said the architects.

Inside, the house is divided up into rows. On the southern side, a double-height living and dining room spans the building, featuring in-built wall storage, a low table surrounded by cushions, and a television zone.

The northern side is spilt into two floors of rooms. On the ground floor, a kitchen and bathroom are sandwiched between two small bedrooms, while the upper level contains an attic library.

Wooden flooring features in every room, and walls are painted white throughout. But the angle of the roof gives each space unusual dimensions.

“Unlike the simple and static exterior, interior spaces provide playful experiences on changing geometries,” said the architects. “Though rooms are rectangular in plan, walls are triangles, parallelograms, and trapezoids in elevation.”

The house also features a first-floor terrace, located at the point where the roof has been swivelled away.

STPMJ describes itself as an “idea-driven design practice”. Past projects by the studio include a mirrored cabin in Tahoe National Forest, California.

Photography is by Song Yousub.