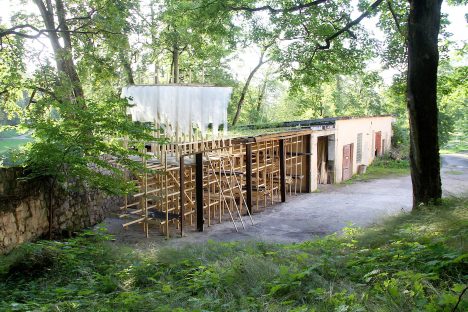 Stacks of recycled materials form tables, benches and stairs in this temporary timber pavilion, designed by architecture students for the grounds of a former beer brewery in Cēsis, Latvia (+ slideshow).

The Archive is one of three structures built by students from the Riga Technical University summer school at the old Cēsis Beer Brewery, which is set to be transformed into a hub for science and arts by Riga-based architects Mailītis AIIM.

The aim was highlight the rich history of the brewery, as well as to create a space for community events like children’s games and parties.

The pavilion is made up of a large wooden scaffolding that is filled with recycled brick and wooden materials, which visitors can rearrange and add to.

“The project is about making evident the life behind the objects that this place has collected through time,” said the team.

“Bricolage of buildings, materials and construction methods from 19th, 20th and 21st centuries forms the curious beauty of industrial architecture of the brewery.”

The freestanding structure adjoins an existing garage on the site and provides seating for the Castle Park open-air stage that it overlooks. There is also a smaller, recycled brick stage between the pavilion and the site’s existing masonry wall.

Related story: The Wild Thing is a “creature-like” cabin that stands tall above a Latvian wildflower meadow

Inside, the found objects create seating, benches and a staircase that leads to a terrace at the top with views over the park. Here, a cloud-shaped flag of fibreglass mesh forms a cover for the terrace, and also offers a beacon to passers by.

“The installation takes the visitor on a journey through the dense framework into dark depth of the structure, then up to the stairs, out from below the roof and culminates with a terrace in the kinetic cloud that opens views over the Castle Park and the secret overgrown roof,” explained the team.

This sequence references the history of an engineer who worked on the brewery during the Soviet era. As one of few survivors to return to Latvia after a spell of hard labour in a uranium mine, his story served as an inspiration.

“He is partly responsible of how the brewery looks now, but before he was one of the few Latvians who returned alive from uranium mines of Chukotka,” said Mailītis. “He used residue to raise his head over the roof and stay alive in camp.”

“We wanted to make stairs from offcuts to climb out from the darkest corner of brewery and to put our head in the cloud.”

Riga Technical University hosts a design-and-build workshop every summer to encourage students to look at community issues while also learning how a building goes together.

The other two installations created this year are a train-inspired party pavilion and an outdoor dining area.

In previous years, students from the summer school have created a library tower where passers-by could drop off and exchange unwanted books and a 4.5-metre-high stilted cabin that offered uninterrupted views of the Latvian landscape.