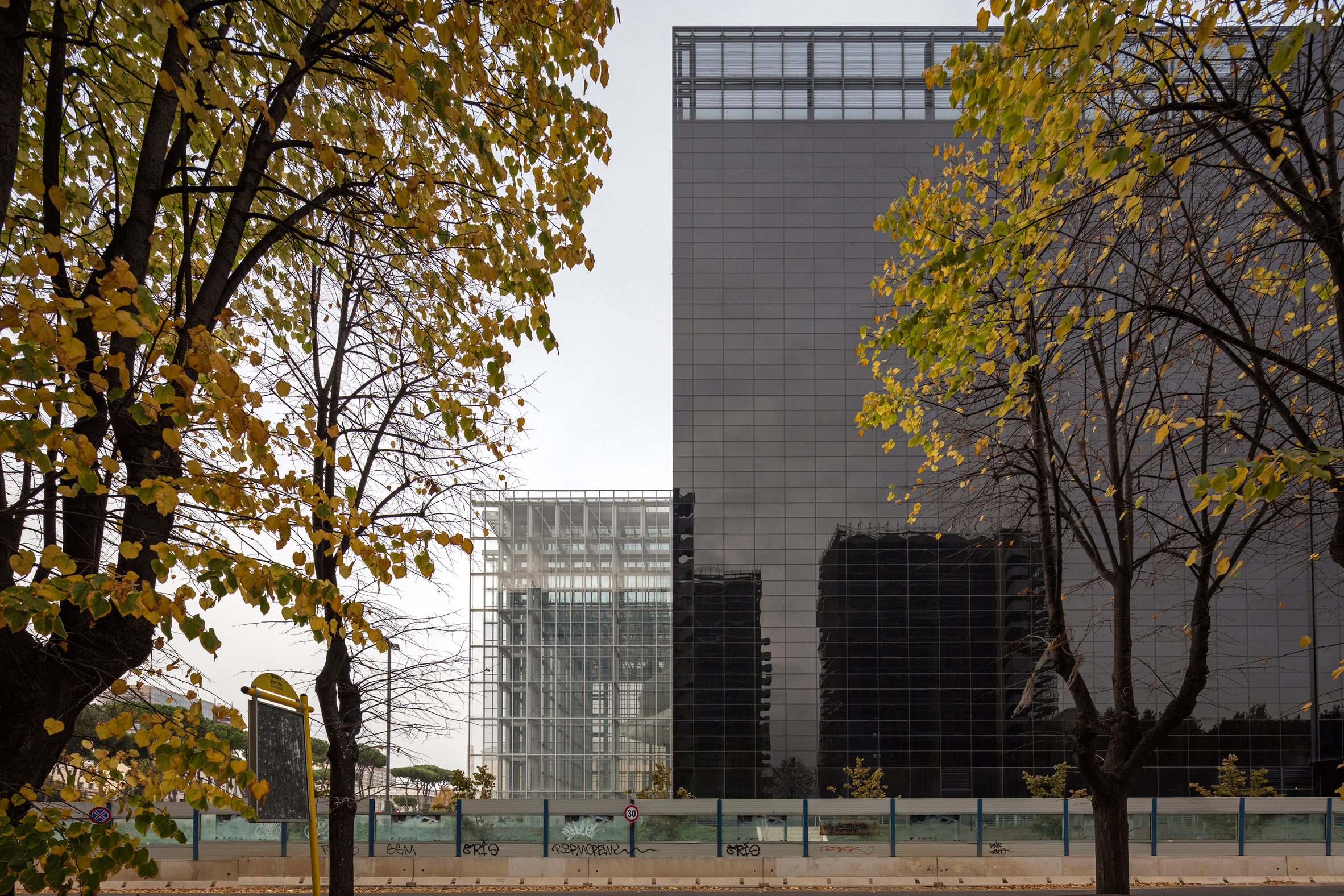 Studio Fuksas has completed a convention centre and hotel complex in Rome, featuring an auditorium in a translucent fibreglass “cloud”, suspended within a huge glass box.

According to the studio, which is led by Italian architects Massimiliano and Doriana Fuksas, the New Rome/EUR Convention Hall and Hotel is the largest building completed in the Italian capital in over 50 years.

Located south of the city centre in the EUR business district, the complex is intended to reference the area’s 1930s rationalist architecture in its simple compilation of geometric volumes.

The project comprises a group of distinct architectural interventions; a basement foyer and information point, a glass cube containing the main conference facilities, and a hotel housed in a separate tower.

The convention centre contains almost 8,000 seats, which are spread throughout various halls and conference rooms, including the amorphous fibreglass structure.

“Fuksas’ design for the complex was created with flexibility in mind,” said the studio, which has its main office in Rome. “Spaces are interchangeable and can be amended to accommodate large or small conferences, lectures and events.”

The main entrance to the conference centre is via a staircase from the street that descends to the expansive basement foyer.

Enclosing the foyer and rising above the surrounding plaza is the Theca – a transparent volume featuring glazed facades that shelter a series of spaces for hosting public and private conferences, exhibitions and events.

The glass surfaces provide visitors and passers by with a clear view of the building’s centrepiece – a cocoon-like pod comprising a metal skeleton wrapped in a skin of advanced-membrane fibreglass and flame-retardant silicone.

Explaining the relationship between the Theca and the Cloud, the studio said: “The interplay between these two spaces is essential to the complex – symbolising the connection between the city of Rome and the convention centre.”

A walkway called the Forum leads towards the Cloud, which is supported laterally at various points by its connection to the outer walls of the Theca.

Escalators and walkways on five levels provide access to a timber-lined 1,800-seat auditorium contained within the shell.

The walkways and access bridges occupy the spaces between the Cloud’s outer surface and the auditorium, providing views of the complex metal framework that supports the structure.

In total, the congress and exhibition hall is capable of accommodating up to 6,000 people.

Alongside the Theca is the hotel known as the Blade. The tall and narrow block is clad in reflective dark glazing and contains 439 rooms, as well as seven boutique suites, a spa and a restaurant.

The complex also provides 55,000-square-metres of public space, including a pair of public squares outside that can be used for outdoor events and activities.

The project’s design and engineering focused on reducing the risk of earthquake damage to the buildings. This was achieved by employing a rigid vertical structure and horizontal insulators to protect against both large and small seismic waves.

The New Rome/EUR Convention Hall and Hotel opened in October 2016, marking the culmination of a project that Studio Fuksas has been involved with since 1998.

The firm – which ranked at number 251 in the Dezeen Hot List – has also been selected to design a convention centre in Canberra, Australia, with a bulging, elliptical roof.

Previous projects include an airport terminal in Shenzhen featuring a curving roof structure perforated by a honeycomb pattern of hexagonal skylights.

Photography is by Leonardo Finotti.