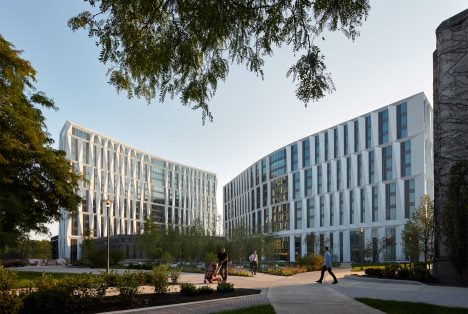 US firm Studio Gang has completed a student residential complex for the University of Chicago that features towers sheathed in glass and sculptural white concrete panels (+ movie).

Scheduled to open on 17 September 2016, the complex – called the Campus North Residential Commons – is the latest addition to the university’s campus, which features works by prominent architects such as Frank Lloyd Wright, Eero Saarinen, Mies van der Rohe, Rafael Viñoly and Helmut Jahn.

Encompassing 400,000 square feet (37,160 square metres), the complex is located on the northeast corner of the campus and is meant to serve as a “front door” for the private university. It was built to help the institution achieve its goal of housing students closer to campus.

The complex contains apartments for 800 undergraduate students, along with dining facilities, classrooms, community rooms, offices and courtyards. At street level, it features shops and a public plaza that are intended to benefit residents in the surrounding neighbourhood.

“We designed an architecture that really feels like home for the students, but that simultaneously opens to and engages with the community,” said Jeanne Gang, founding principal of Studio Gang Architects, which has offices in Chicago and New York.

The site consists of three towers, a low-scale building with a green roof, and several outdoor spaces. “Students have access to two landscaped courtyards that are located above ground level to provide beautiful, readily accessible outdoor spaces,” the team said.

The buildings’ facades – clad in customised precast concrete panels – feature “subtle arcs that recall the university’s history of Gothic and New-Gothic architecture”, the team said. From a distance, the strips of concrete resemble wavy white ribbons.

Windows vary in width and have a ceramic frit that helps prevent birds from flying into the building.

The towers vary in height depending upon their location on the site. A five-storey tower is scaled to the residential district to the east, while a 15-storey tower looks toward a busy commercial context to the north.

Within the towers are eight College Houses, each containing a triple-height communal area and apartments for 80 to 100 students. A reading room on the top floor offers sweeping views of the Chicago skyline and Lake Michigan.

The apartments range in size, from single and double rooms for freshmen and sophomore students, to private apartments – each with a kitchen and bathroom – for juniors and seniors.

“The building also features living space for senior faculty members serving as resident masters and resident heads for each of the houses, who will help cultivate vibrant house communities,” the team added.

The complex’s eating area, called the Frank and Laura Baker Dining Commons, has nine food stations and floor-to-ceiling windows that overlook a courtyard.

“Each of the College Houses has a dedicated house table where students can socialise and dine on a diverse selection of fare, including halal, kosher, vegetarian and vegan options, as well as options made without gluten,” the team said.

The complex has a number of sustainable features. In addition to the courtyards, green roof systems help retain rainwater, “diverting it from the Chicago sewer system to prevent overflows”. Used cooking oil from the dining facilities is pumped into a tank and recycled into biofuel.

Operable windows and custom grilles “allow students to fully and safely open their windows for fresh air and ventilation”, the team said. The building also has a radiant-slab heating and cooling system, with automated controls in each apartment.

“This is a beautiful and inspiring building,” said university president Robert Zimmer in a statement.

“Jeanne Gang and her colleagues have made an outstanding contribution to our campus, to architecture designed to connect individuals and build communities, and to the relationship of our campus to its surroundings.”

Other projects by Studio Gang include a supertall skyscraper in downtown Chicago that will contain luxury condominiums, and a performing arts centre in one of the city’s suburb that is wrapped in glass and wood battens.